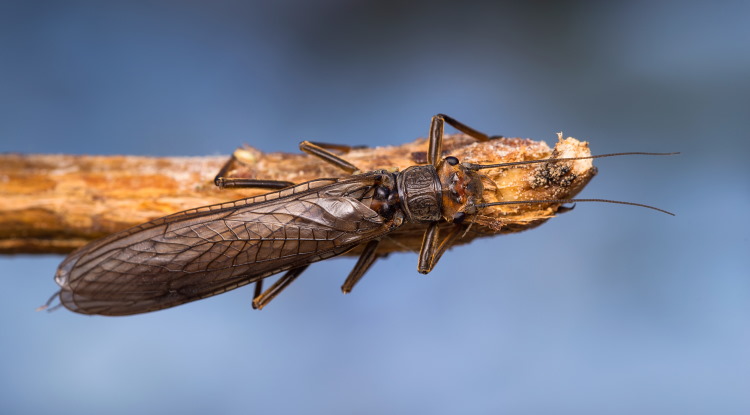 The Plecoptera are an ancient and beautiful order of insects, with the earliest known fossils dating from the Permian. They are popularly known as Stonefly (because they are often seen resting on stones). They are soft bodied, small to medium sized hemimetabolous insects.

There are about 2,000 named species all with aquatic larva, most of whom live only in cool waters – generally running streams or lakes with a upper temperature limit of 25 degrees C.

The adults have little difference in texture between the hind and fore wings, and are rather poor fliers. They also have weak mouth parts, small coxa and generally two long slender cerci. They are seldom noticed by anyone other than entomologists, however they are rather endearing little creatures once you get to know them.

The eggs are laid, either loose in the water, in a jelly on the water, or are placed in cracks near the waters edge. Ultimately the eggs sink and disperse.

The eggs hatch by splitting down the middle and the early instars all have generalised mouth parts and feed on organic detritus. As they grow, some species become herbivorous and some carnivorous. All go through numerous moults, often more than a dozen before they reach adulthood.

In some genera, the plecoptera larvae have gills and in others they don’t, but they all have a high positive requirement for dissolved oxygen in their environment. This explains their restriction to cold waters and the fact that they are generally abundant as adults early in the year (the stonefly larvae hatching in early spring to avoid the warmer water temperatures of summer).

Emergence of the adults usually occurs at the stream or lake edge, often in the space between the ice layer covering the water and the water itself (this space is caused by the water level dropping after the surface has frozen). In habitats that support large numbers of species, their emergence times tend to be staggered/serial and short – reducing the inter-order competition.

Although some species that live in special habitats such as springs – which have constant conditions throughout the year – have emergence times that reflect this and occupy most of the year. Most species appear to emerge at night and generally the males start to emerge before the females, though there is considerable overlap. It is thought that both temperature and photoperiod are important in determining emergence times.

After emerging, the adults fly – or in the case of the flightless species – crawl up into the trees. Flightlessness occurs in a number of species. Sometimes only in the males, sometimes in both species, occasionally it is accompanied by winglessness.

In some species of plecoptera, the adults feed and in others they don’t. The non-feeding species tend to emerge with fully formed eggs, to mate quickly and to lay their eggs and die after only a few days. Males tend to live only a few days in most species anyway, however the females in feeding species may live for 4 to 5 weeks.

Male stonefly drum (beat their abdomen on the substrate, i.e. what ever they are standing on) to attract females and females drum in reply.

The frequencies are species specific and are transmitted through the substrate, not through the air. The normal sequence:

Females only mate once and mated females do not reply to males. Though two sexes and mating is the normal situation, there are some stonefly species from lake Biakal for which males have never been found. In this case reproduction is parthenogenic (where ova develop and mature into female nymphs without fertilization).

The Order Plecoptera is divided into 3 Suborders of 2,4 and 8 families. See also the Tree of Life