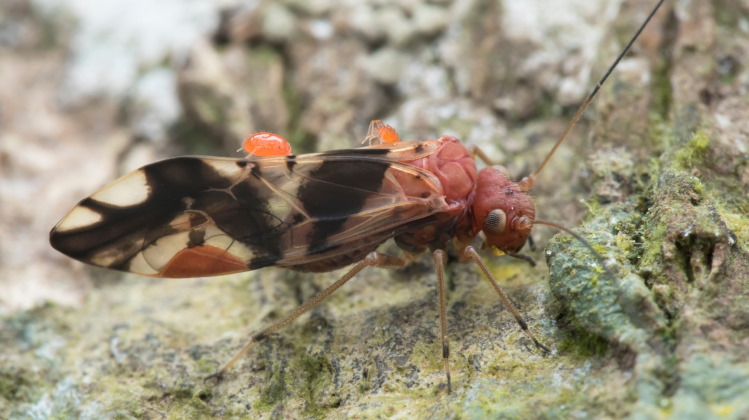 The Psocoptera are a group of small, soft, stout bodied insects which include Book Lice Liposcelis sp. which feed on the paste and bindings of old books, as well as on the fungi which invades the pages. They will also feed on museum specimens if given the chance. There are around 6,258 species according to the Catalogue of Life.

They are Hemimetabolous with thread like antennae of 12 to 50 segments. The compound eyes of many species look like hemisheres that have been stuck on the outside of the head, though in a few species of Liposcelidae they are greatly reduced.

Some are winged, with delicate membraneous wings and some are not. The winged species possess 3 ocelli while the apterous (wingless) species have none. They have biting mouthparts, no cerci and date from the Permian times. Psocids have been recorded coming to light traps by some researchers.

Some species of Psocoptera have become accustomed to live in human buildings, feeding on the variety of organic matter to be found here, i.e. several species of Liposcelis.

While others have taken a liking to our barns and other large stores of straw, which supply them with both home and food. Here they generally feed on either the detritus among the straw or the fungi which is feeding on the straw i.e. Pteradela pedicularia, and Ectobius briggsi.

However the majority of Psocoptera are worthy of their common name of Bark Lice and live on and around trees. Here they feed on the Lichen and Micro-fungi which colonise the trunks of trees in most places where the air is not too polluted, i.e. Hyperetes guestfalicus and Trogium pulsatorium.

Some species of psocids live communally under a web they have spun under the bark of trees. Others, like various Graphopsocus species, place only their eggs in a group under a silken web (see spider silk).

Poscids lay about 20 to 100 eggs and those which don’t place them under a silken web. They may lay them either in groups or singly, depending on species. Furthermore, some species are are vivaparous (giving birth to live young).

In different climates, bark lice can be uni/bi or even trivoltine (voltine refers to the number of generations per year, hence univoltine means 1 generation per year, etc.). They overwinter as eggs and the nymphs pass through 6 instars on their way to adult hood.

Though many species are alate (i.e. have wings) they are notoriously reluctant to fly. The exception to this is Pteradela pedicularia which flies well and in large numbers on still days, where it occurs.

Well, I hope this has been an interesting introduction to the world of the psocids!

Perhaps now you’d like to learn a little about thunderbugs.