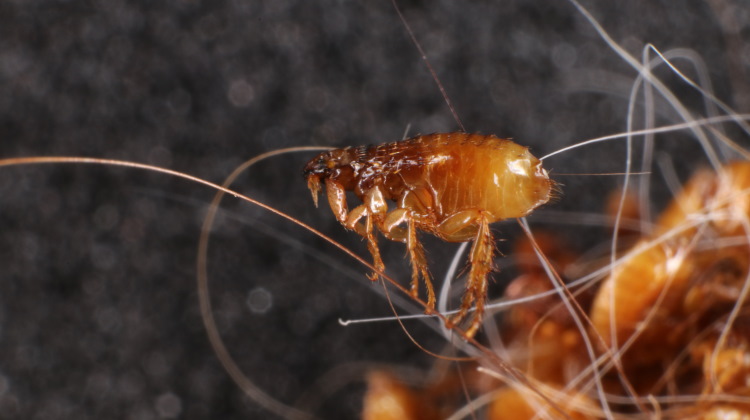 Siphonaptera (Fleas) are small, laterally compressed (flattened from side to side) holometabolous (having a complete metamorphosis) insects.

They are all apterous (flightless [from a = not, and pteron = wing]). They have no eyes, though 2 simple ocelli may be present. Their antennae are short and stout and their adult mouthparts are adapted for piercing and sucking.

The bodies of both Siphonaptera adults and larvae have many backward pointing hairs. It is these – and the powerful leg muscles – which make it so hard to hold a flea between you finger tips; they always slip out.

The larvae are eruciform and apodous, meaning they look like a caterpillar with no legs. The adults are all blood sucking ectoparsites (a parasite which lives on the outside of its host) of mammals and birds. While in general, the larvae are detritivores, feeding on minute particles of discarded organic matter still adhering to the host – or on the substrate of a commonly used sleeping place or nest.

There are about 2,086 species of fleas in the world according to The Catalogue of Life.

A Flea Poem And Some Flea Facts

This well known little ditty offers us not only an interesting insight into a fascinating aspect of life in general, but also a glimpse into the success with which these small creatures have brought themselves to our attention in the past:

And a few facts about fleas…

The Siphonaptera eggs are white or cream and ovoid. Unlike those of many other ectoparasites (a parasite which lives on the outside of its host) they are not glued to their host, but are free to fall off – which they often do. But since the larvae feed on the detrital bits of proteinaceous matter (bits of hair, feathers and skin, etc.) which fall off the host, this is not a problem.

Incubation lasts between 3 and 10 days; the larvae are active and seek out the food around them, they are about 4 mm long when full grown. Siphonaptera take 2 moults or 3 instars to reach the pupal stage.

The adults can lie dormant within the pupal skin for a long time and emergence can be stimulated by movement, such as the vibration created in floor boards when walking on them.

The adults can go a long time after emergence without food if necessary, however a blood meal is normally required to allow the females to lay eggs.

The adults’ life cycles are to some extent controlled by their host. This is caused by hormones in the blood of the host. Thus the Rabbit Flea is stimulated to mate on pregnant Does – and then moves to the kittens to lay its eggs. Adults emerging on sexually immature rabbits, however, may also pair and mate; copulation lasts about 3 hours.

The adult male flea is the sexual marvel of the animal kingdom and possesses the most complicated genital armature (sexual organs) of any known animal.

An adult flea has a maximum life span of about 1.5 years, but on average they only live 2-3 months. Fleas that live in birds nest are eaten by beetles that also live there.

Flea History And The Plague

Fleas have been known and hated by mankind for a long time, though they have often been confused with Bedbugs, Lice and Mites, such as Ticks.

Marco Polo reports that the noblemen of India had beds hung from the ceiling that could be raised from the floor, in order to allow them to escape the pestilent fleas.

The role of pests and disease in human history is often neglected. The plague – a bacterial disease transmitted to man by fleas – is considered by some to have caused more human grief and fear than any other single cause, and to have changed the course of history more than any other force.

Be that as it may, the fleas’ gift of plague to man has caused immeasurable numbers of human deaths. Three main periods of plague pestilence have been recorded through recent human history. The first in 542 which lasted for 60 years; the second lasted from 1346 to 1665 as it circled round and round Europe; and the third started in the 1880’s and was killing 1,000,000 people a year in India by 1903, but failed to run its full course as it was defeated by modern medicine.

That the plague was transmitted by fleas was first proved by the Japanese scientist Ogata in 1898 – and then confirmed shortly after by the French scientist Simmond.

The Dutch scientist Leuwenhoek, who pioneered the development of the microscope in the 17th century, used it to study the life of the flea. He was the first to discover that fleas arise from eggs and have a complete metamorphosis (have young that look different from the adult and form a pupa to become adult).

For this reason, the microscope was for some time known as the ‘Flea Glass’.

The plague, bacillus, kills the fleas and the rats that carry them as effectively as it kills humankind

The concept of a person having a ‘flea in their ear’ arose out of a satirical play by Rabelais, whose character Panurge said “This flea that I have in my ear has been tickling me”. The concept soon caught on and in Beaumont and Fletcher’s ‘Loves Cure’ a character is heard to say ‘ …..and sent me away with a flea in my ear’.

Only in very recent times (and in the first world) have fleas lost their ability to be such an minor annoyance to mankind that they are considered synonymous with the concept of something insignificant which causes great annoyance.

The flea circus reached its peak in the 1830s, when the most famous of all flea circuses – that run by Signo Bertolotto – was touring Europe. It is unfortunate though to realize that the fleas were all permanently glued to their instruments, each other or the chains that allowed them to pull their chariots.

There are several flea circuses still running in the world. One can be seen during the “Oktoberfest” in Munich in December.

Another, in San Francisco, called the Cardoso Flea Circus uses cat fleas rather than the Human Fleas which were used by earlier circuses. The Acme Miniature Circus, the Most Minuscule Show on Earth will be a featured attraction of the Montreal Fringe Festival. That’s where Midge and Madge will perform their spectacular circus stunts.

On a slightly different note, Cardinal Bellarmine is recorded as having said in regard to flea bites: “We shall have heaven to reward us for our suffering, but these poor creatures have nothing but enjoyment of the present life.”

Pliny, the famous Roman, writer maintained that fleas arose out of the action of sunlight on filth.

He also maintained that if you sprinkled the soil your right foot was standing on when you first heard a cuckoo somewhere, that place would from then on be clear of fleas.

The Talmud advised good Jews not to kill fleas on the Sabbath, as they are one of the creatures which reproduce by copulation – which suggest that the ancient Jews were better biologists than the Romans which came after them.

Christian penitents, erroneously mimicking Eastern Mystics, decided to accept fleas as beneficial sources of suffering to bring them closer to God; Francis of Assisi regarded his fleas and other bodily parasites as the pearls of poverty… and refused to kill a single one.

Early American settlers maintained that splinters from trees struck by lightning were good at repelling fleas.

Well, I hope you have enjoyed this little introduction to the fleas of order Siphonaptera.

Perhaps now you’d like to learn about the bee wolf.