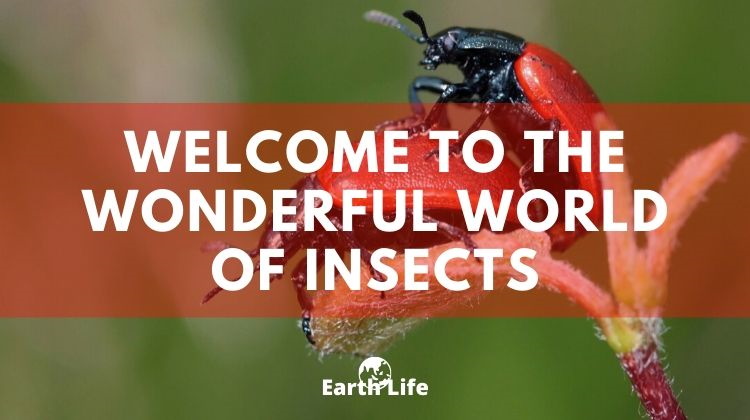 There are well over 1 million different known species of insects in the world.

In fact some experts estimate that there might be as many as 10 million!

All these species are divided up into about 32 orders (depending on whose taxonomic system you use) of which the largest is the Beetles, or Coleoptera. With 125 different families and around 500,000 species, they are an incredibly diverse group of animals. In fact, one in every four animal species on this planet is a beetle.

What Is An Insect?

An insect is described as an air breathing animal with a hard-jointed exoskeleton and (in the adult) a body divided into three parts.

Those being the head – with one pair of antennae – the thorax, which carries three pairs of legs (plus usually two pairs of wings) and the abdomen, which contains the guts and reproductive organs.

A fuller description of the various bits that make up an insect can be found in the Insect Anatomy page.

Insect Habitats – When everywhere is home

Though some like the Marine Flies (Halobates sp.) and the Seashore Collembolan, Anurida maritima, live on the surface of it. Also the larva of a small number of True Flies (Diptera) and Beetles (Coleoptera) have a habitat beneath the surface – mostly in rockpools.

On the land however, there isn’t anywhere you can go that you can’t find some insects. Even in the frozen extremes of Arctica and Antartica you’ll find some insects alive and active during the warmer months.

You will find that insects are literally ubiquitous…

They are in the soil beneath your feet, in the air above your head and on (and in) the bodies of the plants and animals around you. Oh – and as well as on and in you.

The adults live on the mats of algae which float on the water’s surface. Whereas the larva live beneath the mats, in the water – which is as hot as 48 degrees Celsius (for most people too hot to put your hand into).

Most people would consider the largest insect to be the ‘bulkiest’. In this case, the champion insect is the Acteon Beetle (Megasoma acteon) from South America – the males of which can be 9cm long, 5cm wide and 4cm thick.

However, there is a serious challenge for heaviest insect in the world, in the form of the True Wetas from New Zealand. For instance a gravid female Deinacrida heteracantha can weigh as much as 70 grams.

Another competitor for the title of largest insect is the extremely rare South American Longhorn Beetle Titanus giganteus.

These giants can have a body length (not including antennae) of over 16cm (6.5 in). Other longhorn beetles are nearly as large and may look even bigger because of their longer legs, i.e. Xixuthrus heros from Fiji.

Another beetle, Dynastes hercules is also well known for reaching 16cm in length – though it is not nearly as heavy.

However other insects are larger in other ways. The longest insect in the world is the Stick-Insect Pharnacia kirbyi, the females of which can be over 36cm long.

Some living lepidoptera have wingspans as great as 32cm and an area of over 300 square cms.

There are an incredible number of very small insects in the world, far more than there are giants.

Many beetles are in fact less than one millimetre in length.

The North American Feather-winged Beetle Nanosella fungi – at 0.25mm – is a serious contender for the title of smallest insect in the world.

There are also many small Hymenoptera, especially in the Superfamily Chalcidoidea. These include the Fairy Flies (of the family Myrmaridae), of which Alaptus magnanimus at 0.21mm long, was once thought to be the smallest insect in the world. However another Hymenopteran parasite now holds the record…

Megaphragma caribea from Guadeloupe, measuring out at a huge 0.17 mm long, is now probably the smallest known insect in the world.

Other insect orders which contain extremely small members are the Diptera (True Flies) and the Collembola (Springtails).

Ants are social animals and live in colonies.

Sometimes these colonies may contain only 50 or so individuals… but one supercolony of Formica yessensis on the coast of Japan is reported to have had 1,080,000 queens and 306,000,000 workers in 45,000 interconnected nests.

Furthermore they believe another 10% is composed of Termites.

This means that ‘social insects’ could make up an incredible 20% of the total animal biomass of this planet!

Well, I hope you have enjoyed reading through these insect facts today. But there’s a lot more to learn! You could start by getting up close and personal to insects by viewing them through a stereo microscope.

Use the links below to check out the Insect section of Earth Life: