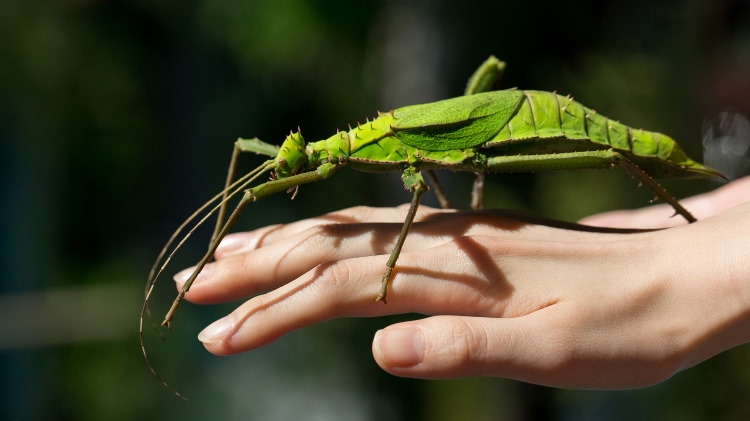 There are nearly 3,000 species of Stick Insect (Phasmida) in the world, all of which feed exclusively on vegetation, they are one of the most popular forms of insect life to be kept as pets.

In general, the more common species of Stick Insect can be kept together. Though if you are breeding more difficult species, then it pays to use separate cages to create individual requirements.

Most Sticks come from tropical or semi-tropical environments and are happiest between 75F and 80F. Though the common Indian Stick Insect Carausius morosus (and some of its relatives) are happy at normal home temperatures of between 60F and 75 F or 24C.

Heating is best achieved by maintaining a whole room at the desired temperature; if this is not possible an electric light bulb can be used over small cages.

It is important to make sure your pet Stick Insects can not reach the light bulb, as they will burn them selves on it!

A red bulb should be used during the hours of darkness as this disturbs the Sticks far less.

Because most Stick-Insects are long, thin animals which hang down from their food plants to shed their skins – it is most important that the cage have sufficient height. As a general rule, it should be three times as high as the adult length of the Stick Insect pet to be kept in it.

It is also useful to have it so designed that you can easily replace the food plant material whenever it is required, taking into consideration that this will mostly be brambles (i.e. spiny rubus sp).

Not all sticks share a common need for humidity, some species such as Carausius morosus will be happy to live in a fairly open cage. Whereas others such as Epidares nolimetangere will require an almost (if not totally) enclosed cage with around 80% relative humidity.

Regardless of this, all pet stick insects need water and it is a good policy to thoroughly mist the inside of the cage – including all the food plant material – each evening before you go to bed or before lights out.

Some Stick-Insects such as Haaniella sp. need open water in a low bowl to drink. Don’t be too concerned if they leave their heads under water, remember that insects breath through their thoracic and abdominal spiracles – not through their mouths like us.

Note also that in some places tap water can harm some species, so it doesn’t hurt to use either rain water or to let the tap water stand for a day or two.

Almost all Stick-Insects eat the leaves of bramble/blackberry and its relatives of the genus rubus.

It is important to make sure that your pet stick insects always have plenty of fresh food. It is often wise to take from sites not to close to major road ways, to avoid the poisoning effects of various pollutants. If this is unavoidable, then the plant material should be washed before being offered to the Sticks.

Great care should be taken in handling pet stick insects at all times. Remember, they are living creatures just like you!

Some species, such as the Indian or Laboratory Stick-Insect Carausius morosus and the Australian or Giant Spiny Stick Insect Extatosoma tiaratum are relatively sturdy. These should be used when allowing younger children or people who could be frightened to handle the Sticks.

Note that some species such as Pink Wings Sipyloidea sipylus tend to lose their legs very easily. Also it should be noted that some species such as the Australian or Giant Spiny Stick Insect Extatosoma tiaratum; the Jungle Nymph Heteropteyx dilatata; and particularly the Thorn Legged Stick Insect Eurycantha calcarata can and will pinch (with their thorny limbs) and bite if not used to being handled.

All Stick-Insects lay eggs; some just drop them onto the ground, some sick them under tree bark or into crevices and some bury them in the ground. If you keep the burying species such as the Small Spiny Stick-Insect Aretaon assperrimus; the Thorn Legged Stick-Insect Eurycantha calcarata; or the Untouchable Stick-Insect Epidares nolimetangere, you will need to ensure a container of damp peat, about 2 inches deep in the bottom of the cage once the females are adult.

Stick-Insect eggs can take from between 2 months and a year to hatch, depending on species. In general, the larger species are the ones which take longest – though not always.

You can not bother cleaning out the cage floor and let the sticks hatch as they want; in this case it is useful to keep some common Woodlice such as Pocellio scaber in the cage to help keep down the fungus.

For more information why not have a look at the Stick Bugs‘ page or contact the Phasmid Study Group.