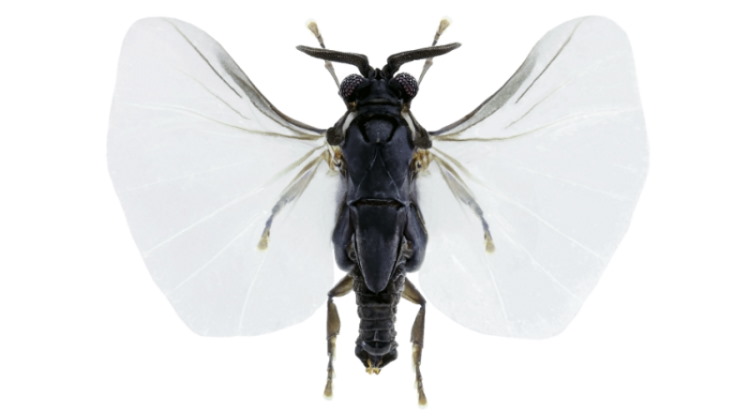 Strepsiptera are small (1.5 to 4.0 mms long), rather unusual looking insects. There are about 617 species known throughout the world according to The Catalogue of Life.

They are ‘endoparasites’ (parasites that live inside the bodies of their hosts, as compared with ectoparasites which live on the outside) of solitary bees, solitary wasps and other aculeates as well as various true bugs.

The female is mostly flightless and are degenerate, in that she has no legs and a body that looks rather like a maggot. The males have only one pair of functional wings and these are the hindwings. The forewings are greatly reduced to look and function like the halteres of flies.

They are not that common and few people (other than entomologists) have or are likely to see them. Their common name of Stylops becomes an adjective when describing the hosts that are carrying them.

Hence an insect suffering from parasitism by ‘Strepsiptera’ is described as being ‘stylopised‘.

Strepsiptera are described as small endoparasitic insects. The males are free living and have unusual ‘flabellate’ (with projecting flaps on one side) antennae, biting mouthparts and the fore wings reduced to small club-like appendages. The hindwings are relatively large and leathery, with longitudinal but no cross veins. The abdomen is 10 segmented and the adeagus (the organ used to transfer sperm to the female) is on the 9th sternum. They have no cerci.

The females, except in the Mengenillidae, are larviform (look like a larva) and live entirely within the last larval skin within which she also pupated, inside the body of her host. The head and thorax are united to form a cephalothorax. She also has no antennae or eyes and very reduced mouthparts. In the Mengenillidae the females are free living and have legs, eyes and antennae.

They are small, active creatures with good legs and two long caudal setae. It is not known exactly how they get from their parent’s host to a new host of their own, but it is believed that they leave the parental host as it visits flowers or in the nest – and then take the opportunity to gain a new host as and when it occurs.

Having entered the new host’s cuticle (which is a larvae itself) they moult to become a maggot-like larvae which feeds by filtering its host’s blood (remember, in insects the blood washes around the inside of the body and is not constrained within veins and arteries, as it is with us).

The larvae reaches its 7th instar about the same time the host is ready to pupate. It now moves towards the host’s cuticle and protrudes its anterior (head) end out of the host’s body normally at the 4th of 5th abdominal segment.

The male now pupates fully. On emergence he leaves the host while it is in flight and has about 4 to 5 hours to find a female and mate before he dies. Mating occurs on the body of the female’s host, as she never leaves the body of her host once she has passed her first moult.

Impact To The Hosts Of Stylops

Though stylops do not feed on their host bodily organs, they do greatly reduce their nutrient intake and stylopised individuals of various species, both male and female, are generally sterile – having been effectively castrated by their parasites.

Female solitary bees often have their pollen collecting baskets greatly reduced and the sting is also often reduced in size. In males, the copulatory apparatus is often greatly reduced and males and females often appear to have acquired the appearance of the opposite sex. The greatest number of stylops found on one host is 31, though 3 or 4 is far more common.