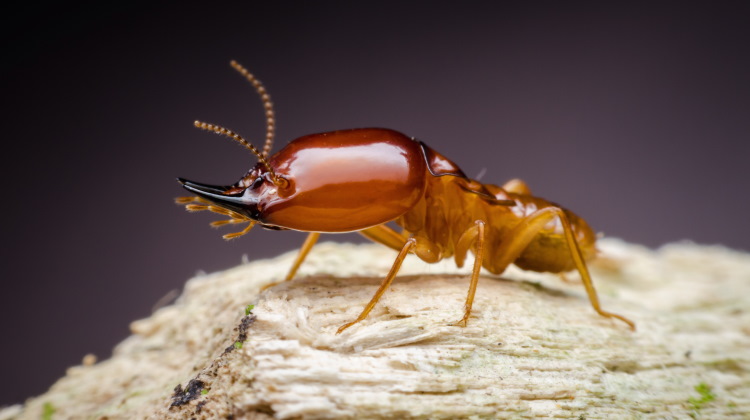 Isoptera (Termites) are well known both for their destruction of human property and for their construction of huge mounds or ‘termitaria’ – which allow them to have a great degree of control over the temperature and humidity of the environment they live in.

They are common in the tropics and occur in most warm habitats as well. They are often called ‘white ants’ because the majority of them are white and small – and live in large colonies, much like ants.

The most primitve Termite known is Mastotermes darwiniensis from northern Australia. Mastotermes darwiniensis lives in the soil in nests consisting of up to 1,000,000 individuals, has very catholic tastes (will eat almost anything) and has been described as the most destructive insect in Northern Australia. Its workers are very similar to nymphs of the Cockroach Cryptocercus punctulatus.

Some of the most advanced Isoptera species are the Macrotermtinae, which grow fungi for food (Termitomyces) inside their nests on piles of faecal pellets. The oldest known Termites are fossils of Cretotermes carpenteri from the Cretaceous.

The sterile workers live for 2-4 years while primary sexuals live for at least 20 – and perhaps 50 years.

Isoptera are described as hemimetabolous, medium sized polymorphic (having more than one form) social insects. They have biting mouthparts, short cerci and moniliform (appearing as if composed of a series of beads) antennae comprising 9 to 30 segments. The alate forms (winged primary reproductives) have four almost equal wings and compound eyes, however the sterile workers and the secondary reproductives have no or greatly reduced compound eyes. Some forms have two ocelli.

The caste of Primary Reproductives are generally darker in color than the other members of the nest and have two pairs of wings, which are voluntarily shed after they have come to ground from the nuptial flight before they mate.

After mating they are called the King and Queen. The Queen’s abdomen becomes enlarged with time, extremely so in the more advanced families such as the ‘Termitidae’ – when she is referred to as being ‘physogastric’ and may have an abdomen 9 cms long.

The Queen, once the nest is well established, no longer eats wood but is fed on the saliva of the workers and/or the fungi in the Macrotermitinae.

The caste of worker termites builds and maintains the nest, conducts all the foraging and cares for the eggs and young as well as caring for the Queen.

The simplest termite nests (those made by the Kalotermitidae and Termopsidae) have no true workers, instead the role of worker is performed by various nyphal instars – sometimes referred to as ‘pseudergates’. Apart from this, the workers normally make up most of the individuals in the nest (though actually male and female, they have greatly reduced genitalia and are functionally sterile).

In some species, such as Macrotermes estherae and Nasutitermes costalis, the workers are dimorphic having large and small forms. In the Macrotermitinae, the larger workers are the males and the smaller workers the females.

Solider Termites are a structurally specialized caste of defenders of the nest and occur in nearly all genera. In most cases they are of either sex, but in the more advanced Termitidae, soldiers may be limited to one sex: males in the Nasutitermitinae and females in the Macrotermitinae and Termitinae. They have large sclerotized heads and come in four main types or forms.

The Isoptera eggs are normally laid singly, but in the primitive Mastotermes the eggs are laid in double rows of 16 to 24 eggs – glued together by a gelatinous secretion. Incubation takes from 24 to 90 days and the eggs overwinter in cooler climes. There are normally seven nymphal instars in established colonies, but the number varies according to a number of parameters such as temperature, age of colony, size of colony and relative humidity.

Termite colony foundation is either by emission of swarms of sexuals, and/or budding (as in Reticulitermes lucifugus, when the farthest outreaches of the colony develop secondary sexuals because of dilution of the inhibitory hormones).

Swarms usually occur on hot, still, dry days. The sexuals tend to be weak fliers and 500 metres is a good flight; the swarm breaks up as the sexuals spread out. The sexuals cast off their wings as soon as they hit the ground. The females (Queens to be) then either stand still and emit a pheromone to attract males (Kings), or run around all over the place until they meet one.

This cycle may go round 4 or 5 times, before the female makes up her mind whether or not to accept the male. If she does, she runs away with him in close contact behind her – this is called ‘tandem running’. When they find a place to mate, the King and Queen become very repelled by light and attracted by wood.

When they find a suitable piece, they take turns excavating a tunnel with a nuptial chamber at the end – then seal themselves inside and begin making the nest.

At first the Queen lays about five eggs, which are looked after by her and the King. When these hatch, they are at first fed by regurgitation by the Queen – but are soon munching wood and thus enlarging the nest. After 2 years, the new nest may still contain as little as 10 workers and one soldier; soldiers take about a year to mature. After a few more years the nest begins to release sexuals.

Termites feed primarily on wood, which contains a high proportion of cellulose. The lower Termites don’t possess the enzymes to break down the cellulose themselves, instead they live in a mutualistic relationship with one or more protozoan flagellates (which live inside the Termite’s guts and digest the cellulose in the wood fibres).

The Protozoa get a stable environment and a constant supply of food – and the Termites are believed to get acetic acid and other simple organic acids which they can metabolise.

The higher Isoptera (Termitidae) do not possess these protozoans, but they do possess anaerobic (living only in the absence of oxygen) bacteria in their guts instead. Though it is believed they do not play as important a role in cellulose digestion as the Protozoa do in the lower Termites; and it may be that the Termitidae can secrete cellulase (the enzyme that breaks down cellulose) themselves.

A number of species of the higher Isoptera in the Hodotermitidae forage outside the nest.

Odontotermes latericus in South Africa collects green grass and seeds, which it stores in granaries inside its nest. Nasutitermes triodiae in Australia store dry grass in special chambers in the walls of their termitaria. While Hospitalitermes monocerus the Black Termite of Ceylon, sends out large foraging columns of workers which are guarded by soldiers to collect the lichens on which it feeds its young.

Some species (i.e. the Macrotermtinae, Termitomyces sp.) grow fungi inside their nests on piles of faecal pellets. The fungus is used for food and each termite species has its own species of fungi; these fungi are not found anywhere outside of the termites nests.

Where Do Termites Build Their Nests?

Most primitive Termites live in dead wood… their homes are just the tunnels created while they are acquiring food and their nests have no real structure.

Species of Rhinotermes, Reticulotermes and Captotermes are what is known as ‘Subterranean Termites’ in America and have their nest below ground, but attack above ground wooden structures. In order to avoid the dryness of the open air they construct covered walkways to allow themselves access to otherwise unreachable above ground wood.

The largest and most complex termitaria are built by the more advanced Termitidae in Africa and Australia. These termitaria are built of either soil excavated in course of digging underground tunnels, or from soil and sand collected on the surface mixed with saliva and faeces.

Nasutitermes triodiae of Northern Australia builds huge termitaria up to 8 metres in height, while another Australian Termite Omitermes meridionalis is known as the Compass Termite because it builds its 3 metre high termitaria with one long axis and one short axis. The long axis always runs North/South and the short axis East/West.

Other Termites nest in the ground and feed on plant roots and and leaf litter, while still others build rounded nests in trees that look a bit like the nest of Vespid wasps.

The higher taxonomy of the Isoptera is well worked out and fairly straight forward, with over 75% of the known species being grouped into only one family: the Termitidae. The first three families are the lower, or primitive, Termites – and the last four are the higher or advanced Termites.