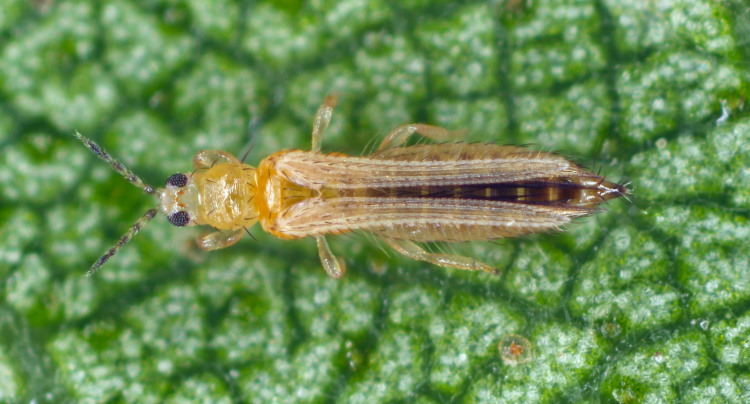 Thysanoptera (Thrips) are small (0.5 to 12.0 mm long, though most are less than 5 mm long) thin, yellow-brown or black insects commonly found on flowers in summer.

Though many are winged, they are often reluctant fliers with a predisposition towards thunder storms as a suitable time of flight. Hence they are called ‘Thunderflies’ or ‘Thunderbugs’ in some places.

Many occur in such large numbers that they are pests of commercial agriculture. However they are also important pollinators of the flowers they fed on – and Liothrips urichi has been successfully used to control a pest plant (Clidemia hirta) in Fiji.

They are easily blown about on the wind and migration can occur in this way. Parthenogenisis (where ova develop and mature into female nymphs without fertilisation) may occur in some species.

The word Thysanoptera comes from the Greek ‘thysanos’ a fringe, and ‘pteron’ a wing.

The largest species occur in the genera Phasmothrips. Fossil thrips are known from only as far back in time as the Jurassic period, making them relatively modern as far as insects are concerned; as well as distinctly better survivors than the Dinosaurs. There are about 5,000 described species.

Thysanoptera are described as holometabolous (having a complete metamorphosis even though the nymphs look like small wingless adults) insects with 2 or 3 inactive pupa-like instars. Thrips are the only members of the ‘Exopterygote’ (insects whose wings develop outside their body and thus have externally visible wing buds in the late nymphal and pupal stages; in comparison with the ‘Endopterygote’ insects whose wings develop inside their bodies and are thus not visible until after metamorphosis) to have developed a true pupal stage.

They have asymetrical mouthparts, having only one (the left) mandible, short 6-10 segmented antennae and no cerci. Their wings when present are nearly equal, very thin with little venation and a lot of hairs making a fringe around the edge. These hairs greatly increase the effective size of the wings.

Fully winged, brachypterous (with reduced wings) and apterous (wingless) forms may occur in the same species. The wingless forms tend to be more common towards Autumn. They have piercing sucking mouthparts.

Most thunderbug species feed on plant sap. To obtain this they make an incision in a single cell with the left (the only) mandible, then insert the maxxillae and hypopharynx and pump out the juices of this and adjacent cells using a pharyngeal pump (this means it is the pharynx, that part of the alimentary canal between the mouth and the foregut, which does the pumping).

Some species though, particularly in the Phlaeothripidae, live in the leaf litter and feed on fungi while the Aeolothripidae are mostly predatory on other insects. Most species over winter as either adults or as pupa.

Frankliniella tritici is a typical flower thrip, generation time varies from between 7 and 22 days depending on temperature. The eggs are about 0.2 mm long and reniform (kidney shaped), they take on average 3 days to hatch, then 2 days for the first nymphal instar, 3 days for the 2nd, 1 day for the 3rd (prepupal) a non-eating stage, and 2 days in the pupal stage. Adults take between 1 and 4 days to reach sexual maturity.

Many Thrips are pests of commercial crops, mostly because they damage the flowers while they are feeding causing stunted and deformed fruits and/or seeds. However some species (Thrips tabaci and Frankliniella sp.) also cause disease through transmission of micro-organisms, such as spotted wilt virus – which has strains which can effect lettuce, pineapples, potatoes and tobacco. You can also learn how to manage thrips.

Some Common pest species are:

For more information you can also see Tree Of Life.

Well, I hope you have enjoyed learning a little about the world of these thunder bugs!

Perhaps now you’d like to learn a little about the stonefly.