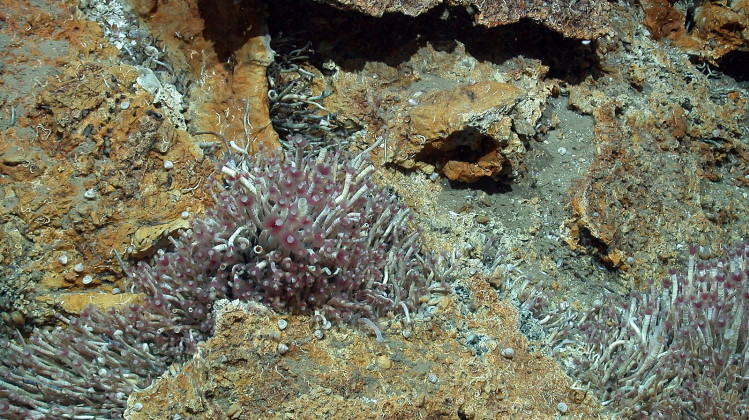 Etymology for the two groups of Siboglinidae, Beard Worms

Pogonophora :-From the Greek; Pogon for beard, and Phoros for bearer.

Vestimentifera :- From the Latin; Vestimentum for clothing, and –Fer for bearing

Pogonophorans and Vestimentiferans, which together make up the Siboglinidae are long, thin worms which live within tubes they have secreted on, and buried in, the sea floor.

Pogonophorans were first discovered in 1900 by scientists deep-sea dredging off the coast of Indonesia. However all the early specimens collected were damaged (having the final body segment missing, as this easily breaks off in the sand) and it was not until 1964 that a whole animal was finally examined and their true place in the animal Kingdom revealed.

Since their were first discovered, they have been found in many waters around the world in depths ranging from 100 – 9,900 meters.

There are currently about 195 species in the family Siboglinidae, however new species are being discovered all the time. Very little is known about their ecology and the taxonomy of the group is currently in a state of reassessment. Though they were originally thought to be an independent phylum, called Pogonophora, this classification is now know to be invalid.  Recent studies have revealed that they are in fact members of the phylum Annelida.

The body of beard worms is divided into four main sections.

1) The anterior region (the front end)  called the “obturaculum” or “cephalic lobe” is the area which supports the tentacles (these vary in number from 1 to more than 1,000).

2) Behind this is the short “Glandular Region”, called the “vestimentum” in the vestimentifra. It is this area which contains the cells that secrete the tube within which the animal lives. These tubes are composed of a mixture of proteins and chitin.

They normally stand upright and are buried, to about 50% of their length, in the substrate (sand or mud or fine gravel, i.e. the sea floor).

In many species, the glandular region includes some ridges of thickened cuticle which are called the bridle and which help the animal hold itself steady in its tube. This bridle is sometimes referred to as a frenulum. In the Vestimentiferans it is replaced by two folds or flaps of cuticle which perform a similar role.

3) Behind the glandular region lies the “trunk”. This is by far longest body segment and it makes up most of the animal’s length. This trunk bears two or more rows of papillae (little bumps or warts) along its length and in many species there is a girdle, or belt, of toothed setae somewhere near the midpoint of the trunk.   Like the ‘bridle’, these setae also help the animal hold its place within its tube.  The part of the trunk that houses the symbiotic bacteria that keep the animal alive is called the “trophosome”

4) The final aspect of the animal’s body is a short holdfast or “Opisthosoma” of from 5 to 30 segments. This holdfast may be much thicker than the trunk section and is buried in the substrate, beyond the end of the animal’s tube.

Beard worms are coelomic animals possessing a schizocoel. They have an enclosed blood system, with a heart (which is a expanded and more muscular part of the dorsal blood vessel) and vessels that run through the body and up into each tentacle. The nervous system is variable but generally includes an anterior nerve ring (which may be called a brain, at least in the larger vestimentiferans), with one or two longitudinal nerve cords and an indeterminate nerve net throughout the body.

The heart, the brain and the excretory organs are all located in the vestimentum.

The Pogonophoran and Vestimentifera worms are unique in the animal kingdom in being the only multicellular, non-parasitic animals without a gut of any sort.

In short, they have no digestive organs. During the early cleavage of the embryo there is evidence of an ‘endodermal gut primordium’. This is normally the first step in the embryo’s development of a gut, however in the Pogonophora it never develops and quickly disappears. Exactly how these worms digest their food is still unknown.   When feeding, beard worms form a cylinder with their tentacles (or single tentacle in the case of Sibioglinum sp.).

These tentacles are lined on one side by masses of fine hairs or threads called ‘pinnules’ (each one only one cell thick). These threads in turn are covered in microvilli, minute projections normally found only in the intestines of animals – where they are important in the absorption of nutrients. At the base of each pinnule, are some cilia. These cilia beat backwards and forwards and generate a current of water which flows through the cylinder made by the coiled tentacles.

Just how this morphology works in terms of gaining the animal nutrition is still not really understood, or at least not proven scientifically. It is known, however, that Pogonophorans can absorb amino acids from the sea water all over the surface of their bodies.

The Vestimentiferans, which live at the bottom of the deepest ocean trenches where there are ‘hydrothermal vents’ (places where hot mineral rich water rises up through the ocean floor), have a commensal flora of bacteria.

These bacteria live within the cells of the animal’s body.. The bacteria metabolize the sulphur compounds that are common in these places and they gain a safe home by living inside the worms. Bacteria however always leak nutrients through their cell walls and it is these leaked nutrients that these worms live off.

Siboglinids are gonochoristic (meaning they are either male or female). The males produce packets of sperm called spermatophores, which he releases into the water.

How the females acquire these spermatophores is unknown. Fertilization is believed to be external and in some species the female retains the fertilized eggs within her tube, until they are hatched. The larvae are not very active and soon set up home not far from their parents. This tends to result in them occurring in large dense patches.