Home
inverts
Brachiopoda: Phylum Of The Brachiopods or “Lamp Shells”
Help us spread the word...
TwitterFacebookPinterest

Etymology: From the Greek Brachion an arm, and Pous a foot.

The Brachiopoda, (or Lamp Shells) are an ancient phylum of filter feeding marine worms.

They live inside a pair of shells, much like the more numerous bivalves. However, they are no more related to bivalves than people are to starfish!

Brachiopods differ from bivalves in many ways, but perhaps the easiest to see is in their shells. Brachiopod shells have a definite dorsal and ventral (upper and lower) half. Bivalves, which are molluscs, have left and right halves to their shells.

Scientists distinguish upper and lower or left and right halves, depending on how the animal’s body relates to their shell. Brachiopods also normally have the ventral (lower) shell larger than the dorsal (upper) shell, whereas most bivalves have the two halves of their shell nearly equal.

They are called Lamp Shells because the ventral valve in a number of mediterranean species resembles the shape of the oil lamps of ancient Greece and Rome.

Brachiopods are small animals, with the largest living species having a shell length of about 10 cm (4 in) and most species being much smaller than this. 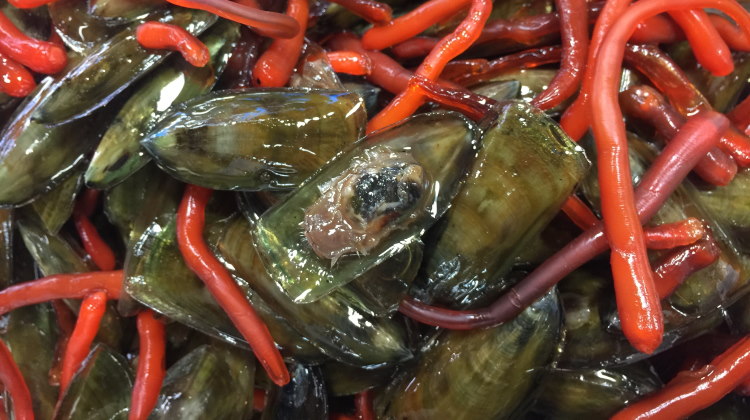 There are only about 396 living species of Brachiopods (Catalogue of Life) known to science now. However there are over 30,000 fossil species known, showing that they were once a much more successful phylum than they are today. The largest fossil (Gigantoproductus giganteus) species had a shell length of over 30 cm (12 in).

Some scientists believe that they were out-competed by the bivalves. However, even though the Brachiopoda appear to have evolved earlier than the bivalves, they were quite a diverse group by the beginning of the Cambrian 600 mya (million years ago). Whereas the bivalves didn’t really get started for another 50 to 100 million years. However both groups were highly successful throughout the rest of the Paleozoic (until about 230 mya).

Four major lineages became extinct between the beginning of the Triassic and the end of the Jurassic, while only one small lineage came into being.

Modern Lingula ungius look almost identical to their Paleozoic ancestors of 400 mya. Because their shells are hard calcareous structures, they are easily preserved in the fossil record – which is why we know so much about the number of species living in the past. 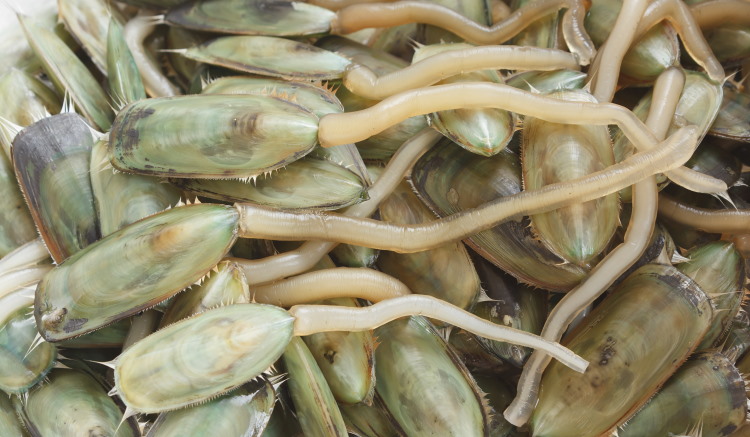 Most species are gonochoristic (having two separate sexes) and asexual reproduction is unknown.

The most obvious aspect of a Brachiopod is its shell.

This shell is a hard, solid object that often remains intact long after the animal is dead. This is why we have such a good fossil record of the Brachiopoda.

The shell is composed of about 50% calcium carbonate or phosphate, which the animal extracts from the sea water. The rest of the shell is composed of either chitin (the same sort of molecule that insects use in their exoskeleton) or proteins. Chitin is the normal choice, with only one genus (the Crania) making use of protein. Never-the-less, the Craniacea are a very successful group.

The shells grow continually throughout the animal’s life. New material is laid down along the larger, rounded edge of the shell (called the ‘margin’) by the cellular epithelium. The outer surface of the shell is covered by the periostracum. The two halves of the shell are normally not equal, the larger half being called the ventral or brachial valve and the smaller half the ventral or pedicle valve. 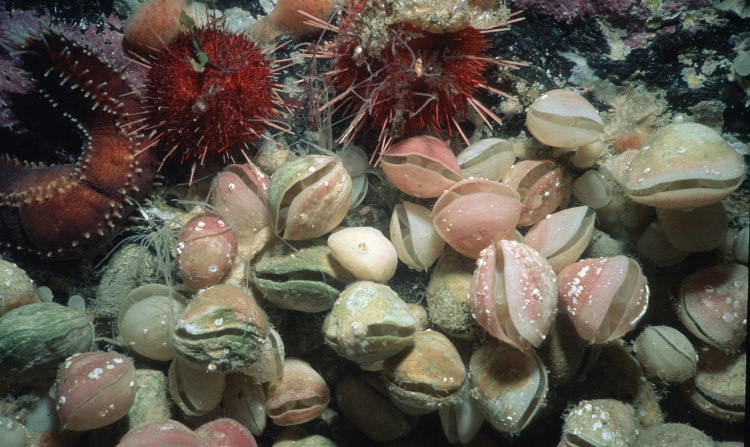 In some brachiopod species, particularly fossil species, the shells have spine like outgrowths that form a grid across the open space between the two valves of the shell when the animal is feeding. They also have possible sensory and storage roles in the animal’s life (interpreting the biology of fossil structures is difficult even for scientists).

Each valve is ribbed – with the ribs radiating outwards from the umbo – and possesses growth lines which run concentrically around the shell, thus crossing the ribs. When closed, the two valves of the shell meet perfectly. The line where they meet is called the commisure.

Taxonomically, the Brachiopoda are divided into two major groups: the Articulata and the Inarticulata – on the basis of the shell structure.

The Articulata are distinguished by the presence of teeth and a definite hinge where the two valves meet at their lower edge. There is therefore an ‘articulation’ between the two shells and the pedicle passes through a hole in the ventral valve.

The Inarticulata have no teeth or special hinge and the pedicle, when present, passes between the two valves of the shell. Most Brachiopod shells are brown while the animal is living, or perhaps greenish from the presence of algae… a few only are white.

Food and Respiration In Brachiopods 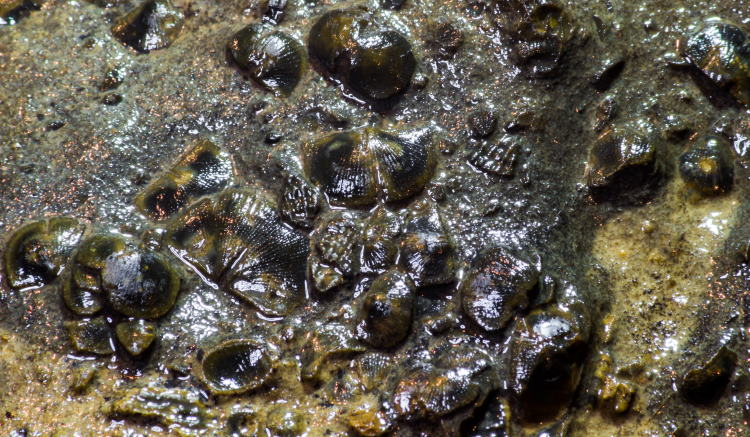 The lophophore, which is the animal’s feeding and respiratory mechanism, is supported – except in very small species, those less than 5mm – by a stiffening rod or calcareous loop that arises from the inner surface of the shell. The lophophore normally has two arms that rise out spirally into each half of the mantle cavity.

Each arm of the lophophore is comprised of a number of slender parallel filaments. These filaments are mucous covered and support larger cilia.

The beating of the larger cilia creates a water current that flows in from each side of the mantle cavity, carrying water over the two arms of the lophophore. The water is then driven out of the mantle cavity in a central stream. Thus we have two incoming flows and only one outgoing flow – because the two central out-flowing streams unite to form a single outflow or exhalent current.

Smaller cilia drive a flow of mucous along the lophophore arms and into the animal’s mouth. Food particles are trapped in the mucous and are eventually digested by the animal. Faeces are carried away from the animal in the departing central water stream. The continual flow of water over the lophophore arms also makes them the ideal organ for gaseous exchange; and it is here, and over the mantle lobes, that respiration takes place.

The Inarticulata, which are the more modern of the two groups, have an anus which directs the wastes into the exhalent current. The Articulata have a blind ending gut with no anus and wastes are passed out of the mouth. 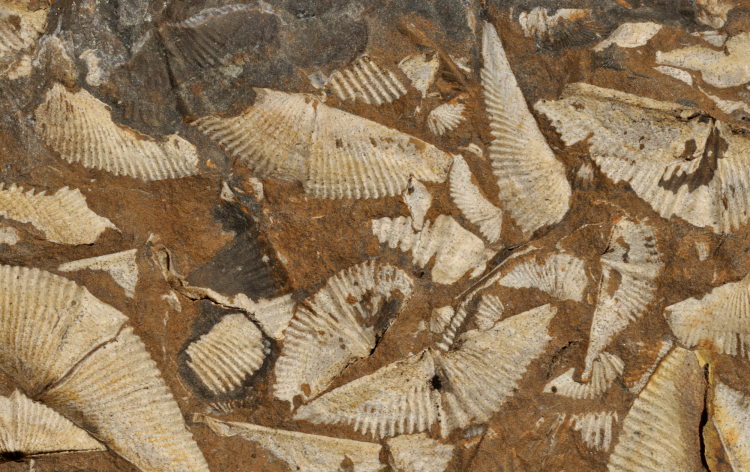 Metabolic wastes are collected from wandering cells called coelomocytes, which collect nitrogenous material through the body and release them into the nephridia. The nephridia have a thin duct leading into the mantle cavity from the body cavity, so that these wastes can also be passed into the exhalent water current. There are two nephridia in the Articulata and four in the Inarticulata.

Within the Brachiopoda body, or coelomic cavity, there is a fluid which contains blood corpuscles. These blood corpuscles contain a respiratory pigment called hemerythrin – which, like haemoglobin, contains iron. These cells carry oxygen to the various parts of the body and take the carbon dioxide away.

There are canals within the body through which this coelomic fluid flows, but it is not a true blood system. There is only one blood vessel which has muscular walls and beats once every 30 to 40 minutes, to keep the fluid circulating around the body.

Most Brachiopod species are gonochoristic (meaning there are two separate sexes). One exception to this rule is the European Argtrotheca cistellula, which is a hermaphroditic species. The gonads are housed in either peritoneal bands or in other special bands in the mantle lobe.

Gametes are sometimes released into the open water, though in many species the ova or eggs are retained within the coelomic cavity – where they can be brooded and protected for a variable length of time.

In Terebratella inconspicua, the fertilised eggs are protected within a fold of the lophophore until after they have hatched. Notasaria nigricans also retains its fertilised eggs in its mantle cavity, this time inside the spiral formed by the lophophore. In other species, the eggs are discharged after fertilisation but before they are hatched.

In some species, such as Lingula sp., the eggs hatch directly into a miniature brachiopod – but in others there is a larval stage. This larval stage has three body segments which will develop into the body, the pedicel and the mantle of the new animal.

Both however spend some time as part of the plankton, before sinking to the floor of the sea and settling into their sedentary life.

The nervous system is fairly similar in all Brachiopoda species and consists of ring of nerves which encircle the oesophagus. From this ring, a few other nerves reach out into the mantle, the lophophore and the muscles.

There is no true brain as brachiopods are ancient – and rather simple – animals. 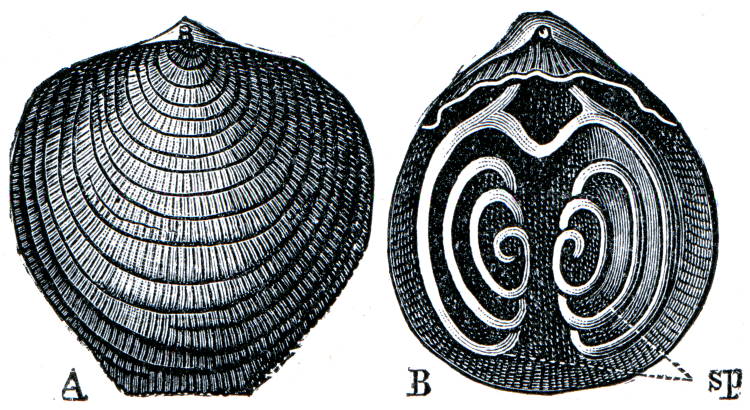 In the Inarticulates, because their is no hinge for the muscles to operate on, the shell opens only through the elasticity of the relaxed muscles. There are three adductors to close the two valves: a single posterior muscle near where the pedicel leaves the shell and a pair of anterior adductors. There are also various oblique muscles, which allow the two valves to rotate, or slide against one another.

The Brachiopoda are not an economically important phylum.

Well, I hope this introduction to the world of the lamp shells has been interesting!