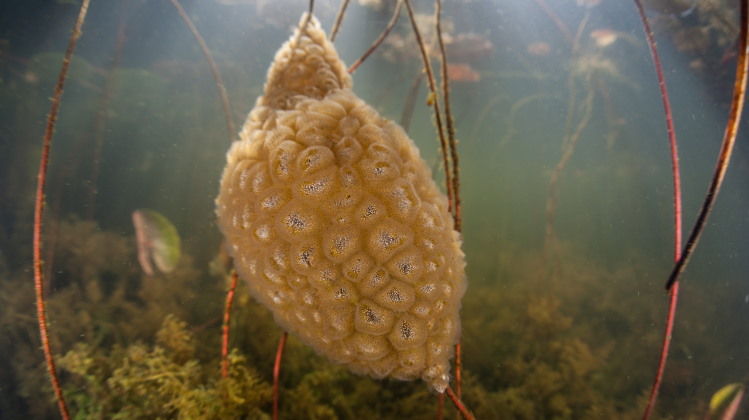 Bryozoa Etymology: From the Greek Bryon for moss, and Zoon for animal.

The Bryozoans are an ancient phylum of small to microscopic – but fascinating and often beautiful – animals that build intricate colonies.

Watching them alive under a microscope is a wonderful experience.

They are well preserved in the fossil record because of their zooecia and we know they have been around since the Ordovician era (500 MYA). There were about 15,000 species during the Cretaceous era, though they were not all living at the same time.

Today there are in the region of 5,000 known species, most of which live in marine environments – though there are about 50 species which inhabit freshwater.

All but one species are colonial. The single known solitary species, called Monobryozoon ambulans, was only discovered in 1934 by a gentleman called A. Remone. It was quite a surprise for the scientific community, which until then had known all Bryozoans as colonial.

Most species live in relatively shallow coastal waters, though Menipea normani from Iceland lives commonly at depths up to 1,000 metres and other species have been collected from depths as great as 6,000 metres.

The original Phylum Bryozoa was split into two when scientists convinced themselves that a small group of about 150 animals, that were then considered as part of the phylum Bryozoa, deserved to be in a separate phylum of their own.

These animals are now known as the Entoprocta and are distinguished by having their anus inside the space enclosed by their ring of tentacles. The rest of the Bryozoans, now officially called the Ectoprocta, have their anus outside of their ring of tentacles. However, they are often still referred to as Bryozoans – or even as Moss Animals – because the colonies of some species look a lot like moss.

Like all phyla, the Bryozoans have their stars and notable exceptions.

A number of species will show what is called by scientists the ‘Disgust Response’. This involves the animals letting their normally straight, upward pointing tentacles droop and bend outwards… in a manner that makes you think the animal is saying “yuck, that’s awful”.

Species in the genus Electra will do this when the water temperature rises above 25C or sinks below 11C. Members of the genus Forrella exhibit the same response if a drop of lemon juice is added to the water. They can detect citric acid (they active ingredient in lemon juice) in sea water at concentrations as low as 1 part of citric acid to 7,200 parts of water. This makes them ten times as sensitive to this as human beings.

The species Hypophorella expansa lives in a symbiotic relationship with several tube dwelling polychaete worms such as Lanice conchylega. Harmeriella terebrans attacks and destroys the zooids of another species of Bryozoan (Tubiporella spp.), then takes up living in their zooecia.

Finally in the 18th and 19th centuries, species of Paludicella caused civic authorities problems by living in and clogging up the water pipes of towns and cities. Eventually scientists learned how to filter the larvae out of the water running into the pipes and the problem was solved.

Colonies of Bryozoans are started by a single individual, which after its larval existence settles onto a substrate and after a little growth begins to reproduce asexually (by budding). Thus a bryozoan colony is composed entirely of clones (genetically identical individuals) of the first animal – which is called the ancestrula.

Colonies can grow quite quickly if the circumstances are right. A colony of Schizoporella sanguinea was observed to grow from a single ancestrula to a colony of 38,000 individual zooids in just five months, in the Yugoslavian harbour Ravingi. It was 12 cm or 5 inches across by this stage.

The individual animals within a colony are called zooids. Each zooid secretes and lives inside a non-living case, called a zooecium (pl. zooecia). These zooecia come in many different shapes and are interconnected in different ways, depending on their shape.

Species with simple, rectangular, box-like zooecia form mat like colonies. While other species, with vase shaped zooecia, build branching tree-like and fan-like colonies up to 30 cm or 1 foot high.

The walls of these zooecia are strengthened with a variety of substances, depending on species. Normally this is either calcium carbonate, chitin or a mixture of both. Each zooecium has a hole at the top called an orifice, through which the animal can extend its ring of tentacles or lophophore when it is feeding. In some species this orifice can be sealed shut by a sort of door called an operculum.

The living animals can extend, and particularly retract, their lophophore as circumstances require – a bit like a ‘Jack-in-the-Box’, often with great speed.

This is a defence against predation and also helps protect the animal against accidental damage and dehydration, in those species that live in the intertidal zone (between the low and high tide limits).

The individual zooids are very small, the largest species is only about 4 mm (5/32 of an inch) long. Although colonies can become quite large, up to 1 metre (3 feet) across, they are more commonly only a couple of cm (less than 1 inch) across or 1 cm (1/2 an inch) high. Species in the genus Flustra can have up to 1,000,000 individuals in a colony only 10 cm (4 inches) high.

Within a colony, the individual zooids are not completely isolated. Each zooid is connected to its nearest neighbours by a strand of protoplasm.

This enables nutrients to be transferred from one individual to another. This in turn allows some zooids to adopt morphologically distinct forms, which can dedicate themselves to the good of the colony without having to worry about feeding themselves (or defending themselves, or even breeding).

This polymorphism (having many forms) is most common in the Gymnolaemates where some or all of the following forms can be found.

Most colonies are entirely sessile (unmoving) but in some species, particularly those which live in freshwater, the whole bryozoan colony is able to walk or glide to a new locality.

Species of Cristatella can move up 10 cm (4 inches) per day. However the fastest species is Selenaria maculata which can move up to 1 metre per hour.

Individually, Bryozoans are much like their relatives the Phoronids. They have a U-shaped gut and a lophophore of ciliated tentacles that generate a water current and trap small particles of food on a constantly moving stream of mucous.

This mucous stream moves down the tentacles and into the digestive tract, taking anything it has caught with it. The digestive tract consists of an oesophagus, a stomach and an intestine which terminates in an anus. The base of the lophophore is circular in marine forms and horse-shoe shaped in fresh-water forms.

All Ectoprocts and Entoprocts feed on small particles of matter free floating in the water column.  They are not fussy and will eat anything that is small enough to be caught by their ring of tentacles and passed into their digestive tract.

All Bryozoans, as far as we know, are hermaphrodite (meaning they are both male and female). Although colonies grow by means of asexual budding of individuals. New colonies are usually started by individuals resulting from sexual reproduction.

The exception to this is that in a few species, if the colony gets too big, it will divide in two. One half will then move a small distance away from the other, before settling down to life again.

Sexual reproduction involves the release of sperm through the tips of the tentacles. Eggs come in two forms. They are either small and also released into the water, where they are eventually found by a sperm. Or else they are larger and retained within the animal’s body (in ooecia in those forms that have them).

These are then fertilised by sperms that are brought in on the feeding current. In this later case the larvae are released after they hatch. These larvae can swim but do not feed. They swim towards the light at first, then after a few hours they swim away from the light – down to the sea floor to look for a suitable substrate to start a new colony on. Most species of Bryozoans practice some form of brood care such as this.

Here they hatch into a ‘Cyphonautes’ larvae, which spends 1 to 2 months in the plankton feeding and growing until they too are large enough to descend to the substrate and start a new colony.

Once the temperature rises, or the water returns, the statoblasts germinate into new ancestrulas. Some species, such as those in the genus Plumatella, produce huge numbers of statoblasts.

As many as 800,000 per metre squared have been recorded, mile on mile along the shores of lake Michigan USA.

Because of their small size, Bryozoans have no need of a blood system. Gaseous exchange occurs across the entire surface of the body, but particularly through the tentacles of the lophophore. Bryozoans also have no special organs for the excretion of metabolic wastes.

The nervous system is composed of a single bilobed ganglion at the base of the lophophore, near the pharynx. This has a number of nerves leading off from it to the internal organs and muscles. It also connects to a nerve net in the body wall and the nerve ring which supplies nerves to the tentacles of the lophophore.

Well, I hope this has been an interesting introduction to the fascinating world of the phylum ectoprocta!

They are incredible animals and more than worthy of our most sincere study.