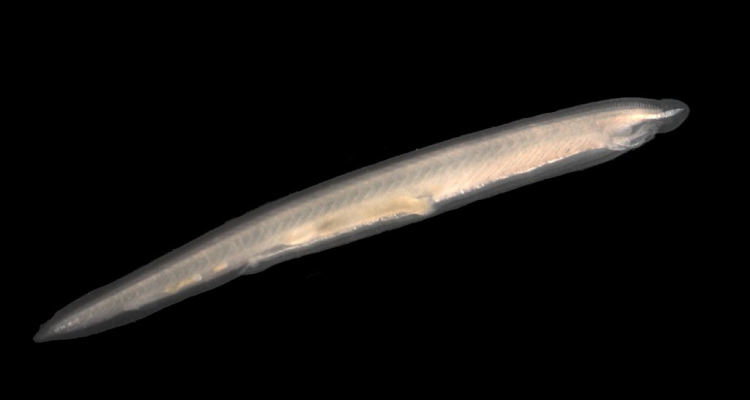 The Cephalochordata are a small subphylum of small (5 to 10 centimetres long) but fascinating animals, also known as lancelets.

According to the Catalogue of Life there are 30 known species of Chephalochordate as of May 2021.  Because COL do not deal in subphyla to find them you have to go straight to Class Leptocardii.

Visually they look like simplified fishes and they are quite capable of swimming short distances. Normally however they prefer to spend their time in the sand of marine shores. All known species are marine.

They occur all around the world, in both temperate and tropical waters.

They have long fascinated biologists because they exhibit all four basic characteristics of the phylum Chordata (a dorsal nerve cord, a notochord, a post annul tail and pharyngeal gill slits) in the adult stage of their lives.

Among the 30 known species, one occurs off European shores (Branchiostoma lanceolatum) which was the original lancelet, and four occur of the coasts of North America, one of which is Branchiostoma virginiae.

The lancelet body is designed with three openings:

Cephalochordates have a closed blood system, with a main ventral and paired dorsal aorta connected by an intermeshing series of smaller vessels. There is no central heart, but instead a series of branchial hearts, where each of the main branches of the system meet the ventral aorta.

The blood of Cephalochordates lacks haemoglobin and is colourless.

Cephalochordates have a simple dorsal nerve cord enclosed in a sheath of collagen fibres, which runs the length of the body below the notochord. From this arise a series of smaller nerves which serve the rest of the body. There is no brain or cranium such as we will find in the Vertebrata.

This is a structure we will come across again in the vertebrates, particularly the fish. It is the rhythmic contracting of these blocks of muscle which allow the animal to flex its body in the sinusoidal movement that allows it to swim like a fish.

In the lower image below I have coloured each myomere differently to show how they overlap.

The Cephalochordata are filter feeders, like the Urochordates, with most of the body being occupied by the large pharynx which exists within the atrial cavity.

Water, drawn in through the mouth by the action of numerous beating cilia, passes through many small slits in the pharynx before exiting via the atriopore. The inside of the pharynx is lined with a thin layer of mucus which is secreted by an organ called an endostyle, found along the ventral surface of the pharynx.

This mucous is kept constantly moving up across the inner walls of the pharynx by more beating cilia, until it meets the dorsal groove of the pharynx. From here it is swept back towards the animals stomach where it and the small particles of matter which have become trapped in it are digested.

Lancelets are gonochoristic, meaning the sexes are separate.

Both sperm and eggs are released into the water and fertilisation is therefore external. From these eggs hatch small ciliated larvae. These soon change into what is called amphioxis larvae (it looks a bit more like the adult form). Both of these larval forms are pelagic, meaning they live in the water not on the sea floor.

The amphioxis larvae feeds on plankton until it is large enough to metamorphosise into an adult, whereupon it moves to the sea floor to take up its fairly sedentary life style.

The Taxonomy of the Cephalochordata

The Cephalochordata represent a very primitive example of the basic Chordate plan, and in some ways resemble what scientists think the original ancestor to the vertebrates may have looked like. However in their current form it is generally agreed that they represent a side branch of evolution rather than a direct ancestor.