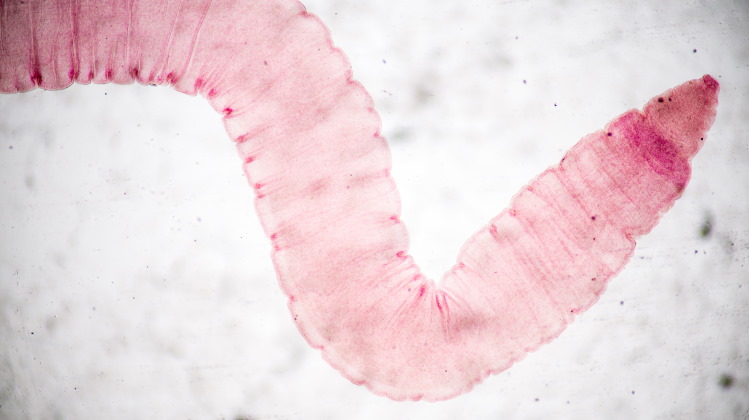 Cestoda or tapeworms are the most specialised of the Platyhelminthe parasites.

All cestodes have at least one, and sometimes more than one, secondary or intermediate host as well as their primary host.

While the intermediate hosts are often invertebrates of some sort, the primary host is normally a vertebrate. Having said this, in some cases both hosts are vertebrates – as in the common Beef Tapeworm Taenia saginatus – and in a few species their may be only a single host.

A number of tapeworms include humans in their life cycles, but infection is not normally a serious health problem and can be cured.

The mature Cestode always lives in the host’s intestines, where it can obtain all its food for free.

Cestoda have evolved to have no digestive system of their own, they simple absorb nutrients from their host’s guts. To aid this process the entire surface of their body is covered with microscopic wrinkles or projections, which greatly increase the surface area available for the absorption of nutrients.

They have no need to travel and therefore have no locomotor organs, i.e no external cilia. Their excretory and nervous systems are similar to other Platyhelminthes. The traditional adult tapeworm is little more than a head with a complicated set of hooks – to hang on with – and a continuously produced series of reproductive segments behind this.

The Class Cestoda is divided into two subclasses:

The Eucestoda contains all the animals we usually think of as tapeworms.

The Cestodaria contains only a few species of unusual worms. Their bodies are unsegmented and roughly oval in shape. They have only one set of reproductive organs and the larvae have 10 hooks for attachment.

The subclass Eucestoda contains very few species that do not conform to the standard tapeworm body plan.

The larvae have 6 attachment hooks. The adult body consists of a head, called a ‘Scolex’ which is distinguished by the presence of suckers and hooks – though the hooks may be absent as in Taenia saginatus.

Because they live in darkness there are no eyes… and because they do not feed in the usual manner, there is no mouth.

Behind the scolex is a band of rapidly growing material that produces an endless series of reproductive segments called ‘Proglottids’.

The proglottids contain both male and female reproductive organs, making the tapeworms hermaphrodites. The male organs mature before the female ones.

In some species such as the Fish Tapeworm (Diphyllobothrium latum) can reach 20 metres in length, contain 3,000 proglottids and produce millions of eggs every day.

Within the Subclass Eucestoda those species which infect humans can be found in two orders: Pseudophyllidea and Cyclophyllidea, which can be recognised by their different life cycles, see diagrams below.

The disease that results from a human being infested or infected with Cestodes or Tapeworms is called ‘Cestodiasis’.

There are two forms of Cestodiasis called ‘Larval Cestodiasis’ and ‘Adult Cestodiasis’, depending on whether or not it is the adult or larval stage of the tapeworm that is living in the human’s body.

In all three cases, humans are not the normal host and is only occasionally infected. Never-the-less, despite the uncommon occurrence of infection, they are all fairly important diseases because the effects on the human host can be quite serious.

Hydatid disease in particular, is a problem because in many cases the infestation can not be treated either by Chemotherapy (Medicines) or Surgery.

Adult Cestodiasis in humans is both far more common and far less pathogenic (makes people less ill). Only heavy infestations are able to cause physical damage (of the gut wall), and possible blockage of the intestines.

The most serious possibility is for people infected with Taenia solium, because under poor sanitary conditions it is possible for them to become infected by the Cestode eggs from their own faeces. This then results in them having Larval Cestodiasis as well, i.e. Cysticercosis.

Well, I hope you have learned a little about class cestoda.