Etymology of Cnidaria: From the Greek knide, for nettle.

The Cnidaria (pronounced ‘nidaria’) as a group of animals are well known to many people under their common names. Sea Anemones, Corals and Jellyfish are all Cnidarians as are Hydras, Sea Whips, Sea Fans and Sea Pansies.  Another, much less well known group of Cnidarian are the Myxozoa.  These are a moderately large group (2,400 identified as of March 2021) of microscopic endoparasites of mostly aquatic invertebrates and fish.

They are linked together by their carnivorous feeding habits, their simple anatomical design and the possession of nematocysts – though one species of Ctenophora possesses nematocysts as well. 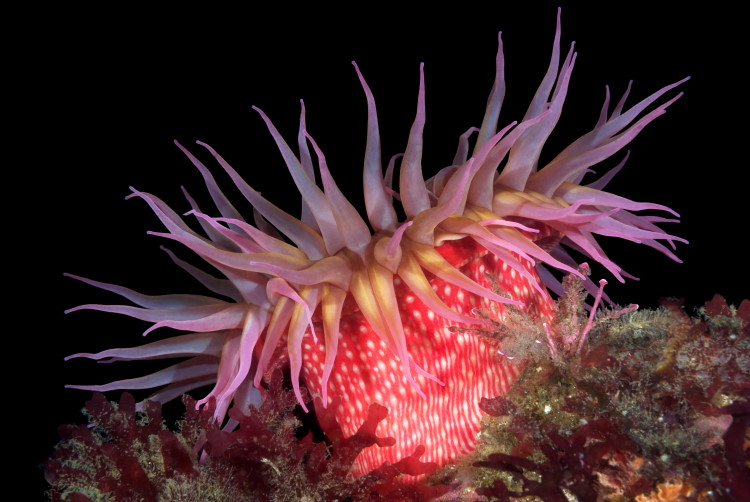 The name Cnidaria has now pretty much replaced the older term of Coelenterata (pronounced selenterata), which these days is often applied to both the Cnidaria and the Ctenophora together. These two phyla are also known as the Radiate Animals because they both have radial or biradial symmetry.

The word Cnidaria refers to Cnidocytes, specialised cells which contain the Nematocysts – the stinging organelles that allow the Cnidaria to subdue their prey.

The Cnidaria are the oldest of the true metazoan phyla. A fossil Hydrozoan from South Australia called Ediacara is 700 million years old, while numerous fossil Cnidarians exist from the Cambrian 500 million years ago.

The Cnidarians, particularly the corals, often make up an important component of the shallow marine fauna of tropical and subtropical seas. All the Cnidaria are aquatic and nearly all are marine. Corals, because of their shallow marine environment and their habit of accumulating a mineralised skeleton (coralite), tend to fossilize well and we know quite a bit about their evolution. 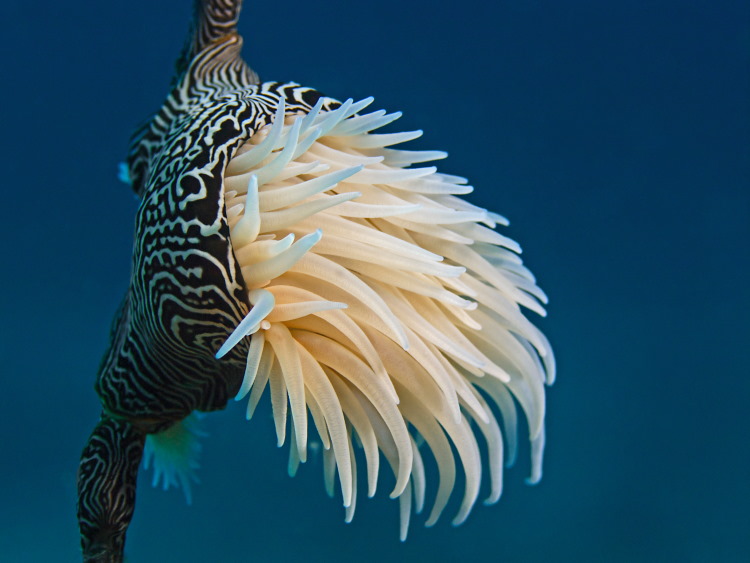 The Cnidarian body is basically a U shape, with intact walls that surround a central digestive area and a mouth at the opening (generally surrounded by tentacles). There is no distinct anus.

In Anemones, the mouth faces up and in Jellyfish it faces down.

The Cnidarians show a more complicated arrangement of cell layers as well as a greater range of cell types than the Porifera. Their bodies show two distinct layers of cells and thus they are called ‘Diploblastic animals’. The two cell layers are an outer Epidermis (or Ectoderm) and an inner Gastrodermis (or Endoderm).

These two layers are separated by the mesoglea, a non-cellular fibrous jelly like material. This is thin in some groups, such as the Hydras, but can be quite thick in others such as the Jellyfish (where it helps provide ‘negative buoyancy’, i.e., makes the animal more likely to float).

The endodermis consists of three or four basic cell types:

One of the most important distinguishing characteristics of the phylum cnidaria are the Nematocysts.

Nematocysts – and their enclosing Cnidocytes – come in about 24 different forms. The differences play a functional role in the classification of the phylum.

A Cnidocyte is a cell that secretes a nematocyst within it. A basic Nematocyst is a capsule made of something like chitin, within which rests a coiled thread. This thread can be shot out of the capsule to encounter prey items, or in some cases to repel predators.

The Cnidocyte has either a modified flagellum, called a Cnidocil, or a cone as a sensory trigger. If this trigger is touched, the nematocyst thread is rapidly ejected. 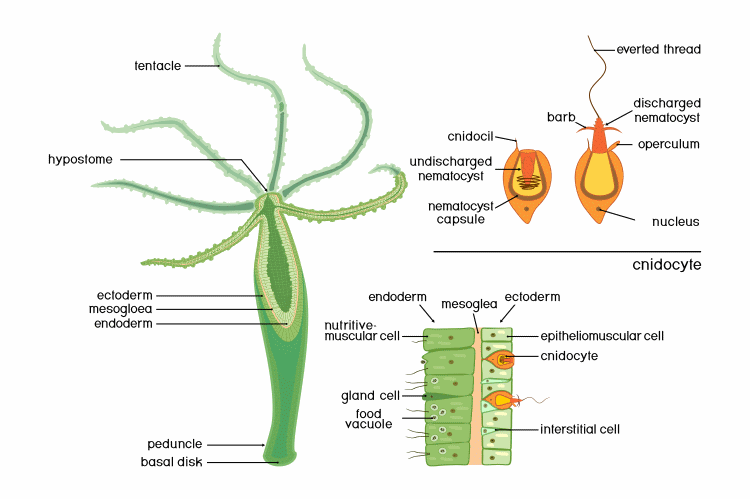 Nematocyst threads come in 3 basic types. The fundamental nematocyst is a thin tubular thread with barbs at the far end, though there may be barbs near the base as well. When the nematocyst is discharged, the barbs penetrate the skin of the prey and a toxin can be injected.

Spirocysts also lack barbs or spines. They are an enclosed tube that is adhesive and are used to trap prey in a tangled net of sticky threads.

Though a few people get stung by jellyfish every year – and a very few of these stingings may be fatal – the only Cnidarians to have a real impact on human beings are the corals.

Corals, and the reefs they form, are important breeding areas for fish – some of which are commercially important. They are also important in terms of biodiversity, because of the wide range of creatures that live preferentially (or only in or near) in coral reefs. 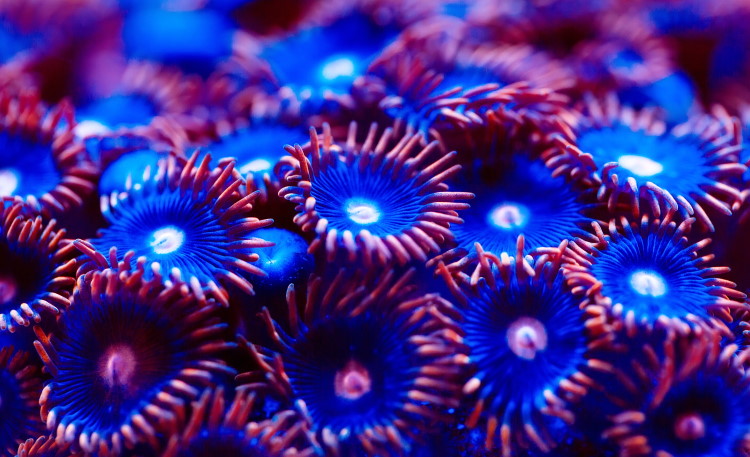 Corals in a marine aquarium

Thirdly, they are of importance because of their beauty and thus have use as a tourist attraction. Coral reefs are among the most beautiful and colourful places on the planet. It is a sad truth (and a condemnation of humanity) that these structures, which take hundreds or thousands of years to develop, are rapidly being destroyed in one way or another by mankind.

Over 75% percent of reefs are now suffering some sort of damage, many are completely dead. However, their is a glimmer of hope: scientists are now conducting coral transplants on the barrier reef.

To add to their troubles, reef building corals, which live in a delicate balance with the dinoflagellate Symbiodinium microadriaticum, have a very narrow temperature range within which they produce new coral skeleton faster than the rest of nature wears it away. This temperature range is 23 to 29 degrees C, or 73 to 84 degrees F. There are fears that global warming could have a disastrously destructive effect on the world’s remaining coral reefs.

For several centuries, scientists have been unable to completely understand how coral reefs – among the most diverse ecosystems on the planet – could live in crystal clear tropical waters where there appears to be too little food to support them.

Recent studies by scientists from Australia and America have discovered that the key lies in the extremely rough surfaces that corals have. These surfaces cause microscopic turbulence, that breaks up the ‘boundary layer’ of still water that surround most submerged objects.

This then allows the corals to access a far higher percentage of the dissolved nutrients than they would be able to otherwise. This also explains the fact that corals grow more quickly in rougher waters.

The Cnidarians are either carnivores or omnivorous filter feeders.

The carnivorous forms do not hunt their prey. Instead they use various ‘sit and trap’ or ‘float/swim and trap’ strategies. They use their Nematocysts – which are not only found on the stinging tentacles, but can be all over the animals body – to stun and or kill their prey.

The Taxonomy of the Cnidaria

There are about 13,351 species of Cnidarians divided between six classes. The Myxozoa were only finally proven to be a part of the cnidaria after 2010.  See Classification and Phylogenetics of Myxozoa by Ivan Fiala, Pavla Sojková (Bartošová) & Christopher M Whipps 2015.