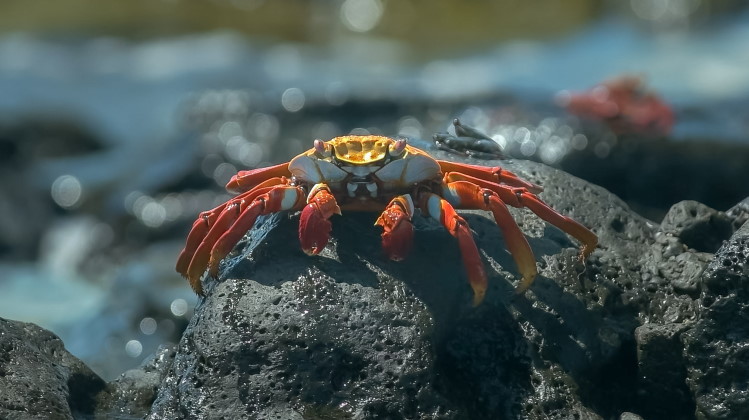 The Crustacea are highly diverse and successful group of animals.  They include Crabs, Prawns, Shrimps and Lobsters (but also Woodlice and Barnacles) are but a few of the wonderfully diverse members of the group of organisms known as the Crustacea.

The Crustacea are only the third largest of the great Arthropod subphylla.

They contain a lower number of species than either the insects or the arachnids. However in terms of diversity of form, they exceed both these groups together.

This great flexibility of structure, along with the general successfulness of the Arthropod plan (exoskeleton and jointed limbs), has enabled them to be extremely successful as a group of animals.

However it has also made it almost impossible to describe a typical Crustacean.

All Crustacea can be distinguished from the other groups of Arthropods by the possession of two pairs of antennae, and by the presence of biramous limbs.

Biramous limbs have a second section or branch, so they look in fact like two limbs stuck together (see diagram). The limbs of people, spiders and insects are all uniramous.

The Crustacea are an ancient group of organisms, with a fossil record stretching back to the early Cambrian 600 million years ago.

There is a Russian fossil of a 12 legged Sea Spider called Karagassiema that is reported to have come from rocks 650 million years old.

Crustaceans are almost entirely aquatic, with only a few hundreds of the 40,000 known species living terrestrially.  Most species have free swimming larvae that become part of the plankton for a time.

The subphylum, or class in some classification schemes, is divided into 9 classes, or subclasses and about 43 orders.

Crustaceans in the genus Gigantocypris are renowned for having the best night vision in the world.

If you measure the sensitivity of eyes using f-stop values (the way photographers measure camera lenses, where the lower the value the smaller the amount of light the eyes can detect) you will find that these Ostracods have eyes that register f-0.25, whereas human eyes register f-2.55.

The Boxer Crab (Lybia tessellata) has evolved special claws to help it carry two sea anemones around with it!

When danger threatens it waves the sea anemones at the intruder, so that the stings of the anemone will drive it away. There are costs to everything in nature however… and the crab has had to learn to use its first pair of walking legs to eat with. It would sting itself in the face or lose its protection, if it ate with its claws like other crabs. Crabs are messy eaters so the anemone is happy, as he gets all the crab’s scraps.

A Mantis Shrimp is the hardest hitting animal known to science, at least for its weight.

Mantis Shrimps are members of the family Stomatopoda. They are shrimps that prey on other Crustaceans by spearing or smashing them. A large species such as Hemisquilla ensigera, which is 25 cm long found in the waters off Californian, can deliver a punch with the impact velocity of a .22 rifle bullet and is capable of breaking double layered safety glass.

A Mantis Shrimp once made the headline news when it smashed one of the glass walls of the aquarium it was living in. Some Mantis Shrimps can strike at a speed that is ten times faster than a terrestrial Preying Mantis

That some Mantis Shrimps (family Stomatopoda) are believed to have the best colour vision of any animal known to science. They have ten different visual pigments in their eyes, as compared with the three that we as humans have. This would allow them to distinguish far finer grades of colour than us.

Many Crustaceans are directly important to our human lives, mostly as food but in a few cases as pests.

Crabs, Crayfish, Lobsters, Prawns and Shrimps are all part of the average human diet. Other species are important indirectly because they are food for other animals, such as Fish, Squid and Whales.

However, as a group the whole class is of great importance because of the role they play in maintaining the balance of productivity of the world’s lakes, oceans and seas.

Crustaceans are also interesting and valuable because of their beauty, their evolutionary diversity and the great enjoyment that can be gained by striving to understand the many wonders of their biology and ecology.

Sometimes they occur in such huge numbers that counting them is impossible. Krill, Euphausia superba, are small 6.5 cm (2.6 in) long, shrimp-like animals – that are probably the most numerous animals in the world. They live in the oceans near the poles, where they are eaten by whales, seals, penguins and many fish.

Despite these numerous predators, this small animal still exists in swarms so large they can tracked by satellite. Scientists estimate that a huge swarm spotted near Antarctica in 1981 contained at least 10 million tonnes of Krill. The word Krill comes from the Norwegian word for ‘Whale Food’.

The largest Crustacean in the world depends how you look at size.

The heaviest is the American, or North Atlantic Lobster Homarus americanus, the heaviest know specimen of which weighed 20.14 kg or 44 lb 6 oz.

The smallest Crustaceans in the world are the Water Fleas of the genus Alonella, which can be adult at a mere 0.25 mm or about 100 of an inch in length.

While many crustaceans occur in large numbers, others are much rarer.

The IUCN has over 479 species on its list. One of these, the Socorro Isopod (Thermosphaeroma thermophilum) is now considered extinct in the wild. Of the rest 57 are listed as Critically Endangered and 77 as Endangered.

Taxonomy of the Crustacea    Body in three parts, thorax in eight segments.

Well, I hope you have enjoyed this introduction and few facts about the incredible world of crustaceans!

Perhaps now you’d be interested to learn about trilobites.