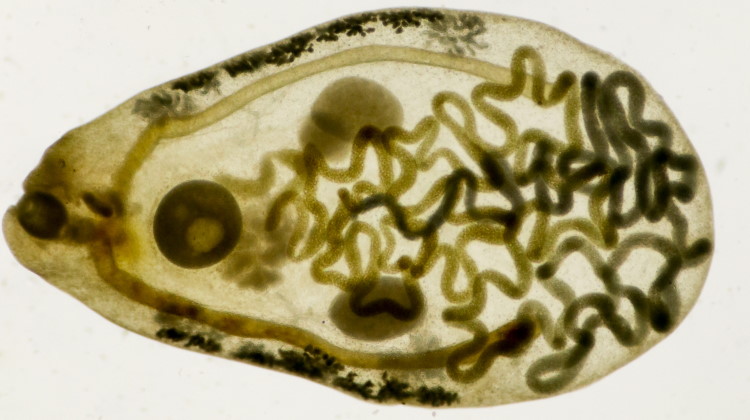 The Digenea are a large and successful group of parasites, including the infamous “flukes”.

Digenea as adults are flat worm shaped animals, that have two suckers. The first is the oral sucker, around the mouth. This has two functions,

The second sucker is found a little way further down the animals body and it has only a single function, that of attachment.

Digenea have what is called an ‘alternation of generations’ in their life cycle. This means the egg hatches into a larval form, this larval form then reproduces asexually to produce numerous copies of itself. Eventually these copies change into another larval form, which in time grows into a sexually reproducing adult.

This possession of an asexual generation means that a single egg can produce not just one infectious agent, but many – maybe even tens or hundreds of thousands.

Only about 12 of the 6,000 known species are infectious to mankind, but some of these species are important diseases with of 200 million people infected world wide. The species that infect humans can be divided into groups, the Schistosomes and the non-Schistosomes.

The Schistosomes are all parasites of the circulatory system of their primary host, meaning they live and feed inside the blood vessels. Because of this they are all very thin animals, ranging in size from 10 to 30 mm (0.43 to 1.26 ins) in length to 0.2 to 1.0 mm in diametre.

The males are shorter and thicker than the females. Females only reach sexual maturity after they have been mated by a male. The male has a long groove along one entire side of his body that he uses to clasp the female.

After mating the two remain locked together for the rest of their lives. They can live for several years and produce many thousands of eggs.

The eggs are simply released into the blood vessels, where they are carried away from the major vessels to the capillaries. The eggs tend to collect in the capillaries and this can be a problem in heavy infestations.

The eggs are oval, but have a sharp spine on one end. This spine allows some of the eggs to rupture the capillary wall and escape into the host tissue. Eventually some eggs will escape from the animal via the urine, faeces or spit and – if they are lucky enough – to find their way into a water body where they will hatch.

The eggs hatch into a sort of larvae called a Miracidium (pl. Miracidia). These Miracidial larvae seek out an aquatic snail and enter its body. Here they turn into another sort of larvae called a Sporocyst. The Sporocyst is the asexual generation and it produces many daughter Sporocysts. Sporocysts eventually become a third larval form called a Cercaria (pl. Cercariae). These Cercariae leave the snail and actively seek out the mammalian host.

The host is penetrated through the skin while it is in the water.

Cercarial larvae are not able to recognise the correct mammalian species, so they just infect any mammal. Large numbers of cerariae die as a result of penetrating the wrong host.

Each species is specifically evolved to survive the immune system of a particular mammal species. In the wrong species they are killed off. In humans this can cause a non-infectious temporary discomfort known as “swimmers itch”.

Four species of Schistosomes are found to effect human beings, they are all members of the genus Schistosoma and all have snails as the intermediate host.

S. mansoni is the most common while S. japonicum represents the greatest problems in control because it infects a large number of non-human mammals such as Cattle, Dogs and Rats.

The non-Schistosome Digenea are often called ‘Flukes’ because of their flat leaf-shaped bodies.

Instead, flukes form cysts on vegetation or in the snail’s body – or in the body of an animal which has eaten the snail. Thus the primary host always becomes infected as a result of eating material contaminated with encysted cercaria or metacercaria. There are seven major species of non-Schistosomes which infect mankind, all of them infect people when they are eaten as metacercarial cysts.

All leave humanity in human faeces.

One species, Paragonimus westermani, lives in the lungs, and so can also have its eggs passed out in spit. The other six species of flukes live in the human digestive system. Normally infection with these parasites is mildly to (occasionally) seriously unpleasant, only very rarely is it life-threatening.

There are many species of Digenea parasites that infect other animals besides mankind – and some of these infect our stock and pet animals.

Some such as the Cat and Small Liver flukes have two intermediate hosts.

The Small Liver Fluke has its eggs eaten by land snails such as Zebrina detrita and Cionella lubrica. Larvae escape in mucous and infect ants, which are then eaten accidentally along with vegetation by the primary host – eggs are passed out in the faeces as usual. The Cat Liver Fluke goes Snail > Carp > Carnivore.

Sometimes this species can infect Humans as well.

Well, I hope you have learned a little about the fascinating (and unnerving) world of flukes!

Perhaps now you’d like to learn more about the Turbellaria.