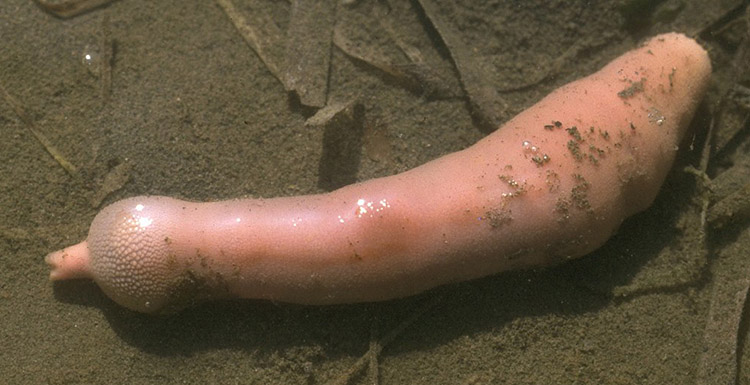 Echiuran Etymology From the Greek Echis for Viper and Ura a tail.

The echiuroidea (spoon worms), once known as the phylum Echiura, are small group of polychaete worms in the phylum Annelida.  They occupy marine, or occasionally brackish ecosystems and mostly live in burrows in soft sediment.  Echiurans live from the sea shore to depths of more than 7,000 meters, however most species are known from coastal areas and they can be common on mudflats. Most echiurans have sausage-like bodies that are narrower in the middle than at either end.

The majority of species live in U-shaped burrows and are detritivores, feeding on animal and plant debris and the micro-organisms that inhabit the sea floor. One of the exceptions to this is Urechis caupo (the “Inn Keeper” worm) which is a filter feeder.  Urechis caupo is called the “innkeeper worm” because of the other organisms such as small crabs, polychaete worms, and fish, live commensally with the echiuran in its burrow.  A few species, such as the thalassematids and bonelliids, chose to live in cracks and crevices in rocks rather than buried in the sediment of the sea floor.

Echiurans get their common name of Spoon Worms because they possess a large flattened and laterally curved proboscis.  They use this proboscis to bring food towards their mouth.  In some species the proboscis is longer than the rest of the animal.   Echiura come in a variety of colours, brown, green, red, or trans­parent. The size of different species is quite variable with the largest being giant Ikeda taenioides, which can reach lengths of nearly 2 m (7 ft) with its proboscis extended, and the smallest the minute Lissomyema melllita, measuring just 1 cm (0.4 in) in length.

The Ecology Of Spoon Worms

Detritus feeding echiura use their scoop-like proboscis to collect detritus and to bring it to their mouths.  The proboscis is ciliated below, these cilia allow it to be walked out across the substrate.   The proboscis can be used to search out and retrieve food particle or (in other species) it can be extended beyond the burrow so that detritus will collect on it.  Food particles are transferred to the mouth by streams of mucous moved by ciliated hairs.   The proboscis can be curved up to make a tube in some species and can be contracted into the burrow when not in use.

The digestive system of spoon worms consists of a mouth, pharynx, esophagus, (stomach in some species), gizzard, intestine, and hindgut or rectum. The mouth, pharynx and esophagus are lined with ectoderm and there is a sphincter at the posterior end of the esophagus.

Many bonelliid echiurans have a green body color derived from the green pigment ‘‘bonellin” in their skin. This pigment has toxic qualities and likely protects the animals from predators. Some thalassematids are also coloured green, however it is not known yet whether their spin contains bonellin.

Echiura are dioecious and gonochoristic, meaning the males and females are separate individuals.   For the majority of species their is little difference between the species.  In these cases fertilization is external, meaning the females release their ova into the water and males release their sperm into the water simultaneously. The sperm then swim through the water until they find an ovum to unite with.  This is a chancy mode of reproduction, though quite common in marine animals, and usually involves the production of huge numbers of eggs and sperm to insure that enough find each other and survive to maintain the species.

In the orders Bonelliidae and Ikedidae the males are tiny, much, much smaller than the females and actually live inside the female’s body.  This allows for internal fertilization of the young.  Any larvae bonelliid that touches a females skin becomes male and stays with that female.

Once the ova is fertilized it immediately blocks any other sperm from entering.  Within the ova the zygote undergo spiral cleavage. Gastrulation (when the bi-layered blastula becomes a mulit-layered gastrula) usually occurs occurs at about the 148 cell stage. The larval stages of most species free-swimming trochophores  The exceptions again being the Bonellids, whose larva are well ciliated and crawl about on the substrate.

The trochophore larvae stage may last up to 70 days. Metamorphosis is usually gradual, and the larva eventually settle out on a suitable substrate to take up adult life.

Spoon worms have little impact on humanity outside of their interest to scientists.

Larger species are eaten in parts of Asia.  In Korea, Urechis unicinctus (the fat inn-keeper worm) is considered a delicacy when chopped and eaten raw.

The bonellin that gives various Bonellid species their green skin is being investigated by scientists as has many antibiotic properties.

Currently no species of Echiuran are listed as recently extinct, endangered or even vulnerable.

The Echiurans have had a troubled time since their first recognition by science in 1766 when Pallas placed them in the Annelida and in the genus Lumbricus.   For the next 200 years they were moved around in the phylum Annelida until in the middle of the 20th century they were raised to the level of phylum. They remained a phylum for the next 50 years or so, but by the beginning of the 21st century their time as a independent phylum was coming to an end.  Between 2000 and 2015 better scientific technology and DNA analysis proved that they were in fact Annelids that had secondarily lost their segmentation.

During this time their taxonomic status varied as different authors tried to place them in the correct relationship to the rest of the phylum Annelida.  In their seminal work, published in 2015, Ruggerio et. al. Placed them as a subclass of the class polychaeta.  A Higher Level Classification of All Living Organisms      The website Catalogue Of Life currently lists them as an order in the class polychaeta, but then the COL does not deal in the taxonomic rank of subclass at all.

Internally the Echiuroidea are divided into two groups and five orders.