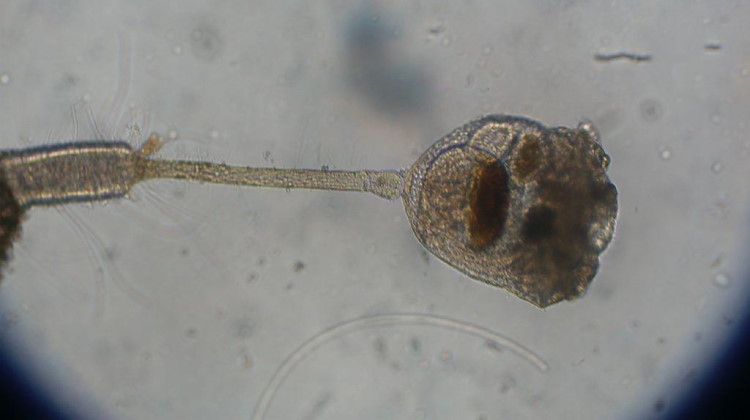 Etymology: From the Greek Entos inside, and proktos for anus.

Entoprocts, sometimes called “Goblet Worms” because they look a lot like drinking goblets, are small to minute (0.5 mm to 5.0 mm aquatic animals.

Of the approximately 150 known species most are marine. They live primarily sedentary and either colonial or solitary lives in coastal marine environments. A common marine genus is Pedicellina. The members of genus Urnatella are the only species to live in fresh waters and Urnatella gracilis is a common species in such environments in both Europe and North America.

In some text books, the Entoprocta are called Kamptozoa (Nodding animals) and in other texts, particularly older ones, they are described as being part of the Bryozoa. The Entoprocta were originally included in the Bryozoa, however scientists later decided that they deserved to be in a phylum of their own.

Although the general body plan and ecology of the Entoprocts indicates that they are an ancient group of animals, because their bodies have no hard parts we have no fossil record of them at all.

All Entoprocts are filter feeders, trapping small particles in the mucous secreted by their tentacles. This mucous is kept constantly moving towards their mouth by numerous small cilia on the tentacles. Most species have larger cilia on the sides of their tentacles which generate a water current when they beat.

They have a U-shaped gut which ends in a raised anus in the centre of their 6 – 36 tentacles. The water current moves from below the animal, up through the tentacles and away. Carrying the faeces away from the mouth, which is lower than the anus, and out through the central space between the tentacles – such that it does not contaminate the food bearing mucous.

In the Bryozoans and Phoronida (which are both also lophophore bearing filter feeders) the water current moves down from above the animal and passes over the mouth last – before exiting the tentacular ring. Here the faeces, being released outside the tentacular ring, also do not contaminate the food bearing mucous. Two different ways of doing the same thing.

Nearly all species of Entoprocts are sedentary once they achieve the adult form. The exception to this rule being members of the genus Loxasomella, which lives in the tubes of marine annelids where it is reported to be quite actively mobile.

Entoprocts are attached to a substrate by a stalk or pedicel. The bulk of the body is contained in a cup-shaped calyx at the upper end of this stalk.

Many species form colonies by asexual budding, beginning from a single original founder. Some species however are solitary, and most species exhibit sexual reproduction as well.

Sperms are released directly into the water, but the eggs are retained in a depression in the upper surface of the calyx until the larvae hatch. The larvae are generally free swimming and are technically referred to as a trochophore larvae.

At the end of their planktonic life, the larvae sink to the substrate and look for a place to settle. Once settled, they will either metamorphose into a small adult or give rise to an adult by budding – depending on which species they are.

Entoprocts have no blood system and no special respiratory organs. Instead gaseous exchange takes place over the whole surface of the body. Marine species have two nephridia for the removal of metabolic wastes, while fresh water species have many.

The nervous system consists of a single large ganglion in between the mouth and the anus from which individual nerves reach out to the whole body.

The bulk of the body is filled with mesenchyme tissue, which some experts interpret as a pseudocoelom. Others consider the Entoprocts to be acoelomate, or else closely related to the Ectoprocts.

Which ever classification system you use Entoprocta are generally considered to make up a single class of animals, which in turn contains 3 families: Loxosomatidae, Pedicellinidae, Urnatellidae.

Like all living things, the Entoprocta or Goblet Worms have their unique part to play in the life of this planet. They feed on microscopic organisms and are themselves food for small crustaceans and molluscs.

The fact that none of them are economically important to mankind means there is still an awful lot we have to learn about the beauty of their lives.