The gastropod shell is a distinctive and charismatic characteristic of most gastropods.   The majority of gastropods possess a shell of some sort and the design of these shells is highly variable.  However, in terrestrial slugs it is greatly reduced or absent and in sea slugs it is lost before the animal reaches maturity.

The majority of gastropods have coiled shells, however in limpets and abalone the shell is reduced to a cap shape.  In abalone this is partly a visual effect caused by the last whorl being 90% of the shell.

The study of mollusc shells, which includes gastropod shells, is called “conchology”. People often collect these shells because of their great beauty of form and colour.  Like flowers, they are one of the great forms of beauty in our world.

The shells of many marine species are often adorned with spines and ridges for protection against predators.  In terrestrial species the shell is quite thick in species from dryer, or desert habits and much thinner in species from humid tropical habitats.

A gastropod has just a single shell throughout its life.  As the snail grows, so it needs to enlarge its shell.  This is a continually ongoing process.  For most gastropods, coiling the shell around a central pillar (called a columella) as opposed to simply growing a larger cone, has two benefits.

Firstly it make the snails home much more compact, meaning it is easier to carry around and more fully protective.  Secondly it theoretically can be cheaper, meaning the animal needs less material to build itself a functional home. 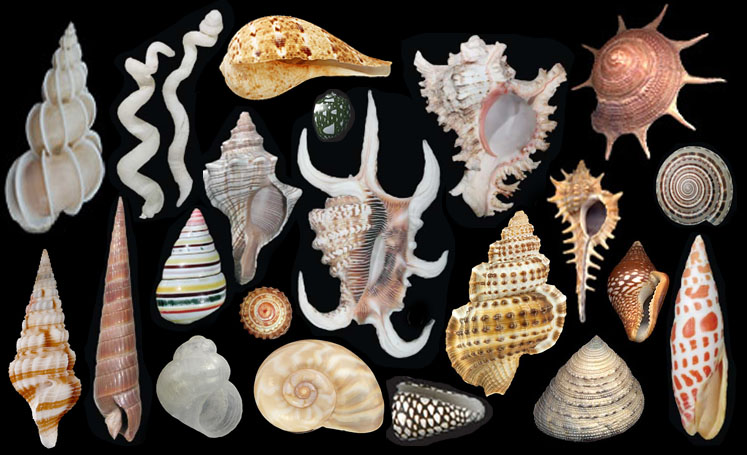 A selection of gastropod shells, showing the diversity of form.

The Structure & Anatomy of the Gastropod Shell

Gastropod shells are comprised of a mixture of calcium carbonate and an organic protein matrix called conchin or conchiolin.  The gastropod shell is constructed in three layers.  The outer layer is made up of conchiolin and is called the periostracum.  This periostracum is typically what gives the shell its colourful pattern. 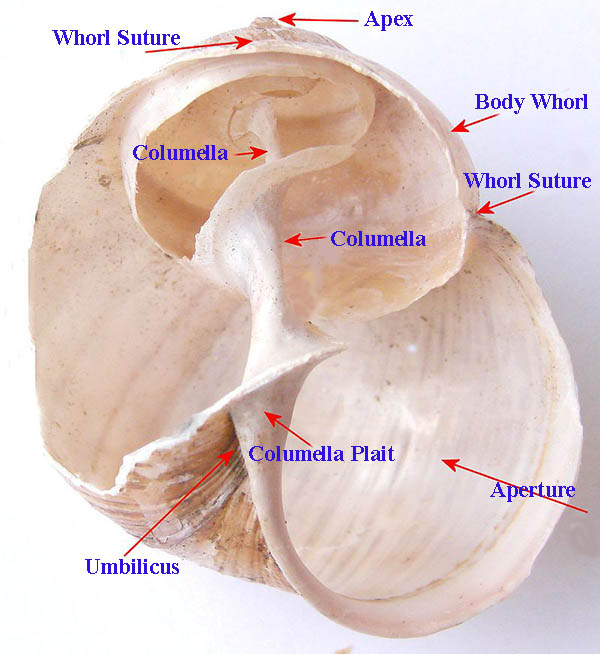 The Anatomy of a Snail Shell.

The gastropod shell, much like the bivalve shell, is secreted by the mantle. The growth of the shell begins in the larval stage.  This first growth is called the protoconch.  The protoconch forms the axis (peak) of the adult shell.   The areas where one whorl or coil meet another are called “sutures”.  Through the center of the shell is a column of shell material called the “columella”.  Looking at the shell from below you can see a hollow.  This hollow is aligned with the axis and cone shaped, getting smaller as it approaches the apex.  It is called the “umbilicus”.

Coiling in the Gastropod Shell

In typical gastropods the shell is an expanding spiral supported by a central rod called a columella.  Shells can be coiled in either of two directions. These are referred to as ‘Dextral’ = right-handed, and ‘Sinistral’ = left-handed.  Most snail shells are dextral, especially among marine species. Coil direction is usually the same for all specimens of a single species.  However there are some families, predominantly from arboreal tropical habitats, in which the population is a mixture.  Limpets have bilaterally symmetrical shells with no coiling.

For some reason sinistral coiling is much more common among terrestrial species than in aquatic species.  Strangely some groups are known to have changed their predominant coiling direction over time.  Today most Cone Shells are dextral coilers, but the fossil evidence suggests that in distant past this family were more often dextrally coiled.

Some species of gastropods may change the coiling direction of their shell during their larval development (their ontogeny).  This usually happens during the metamorphosis from larval to post-larval form. 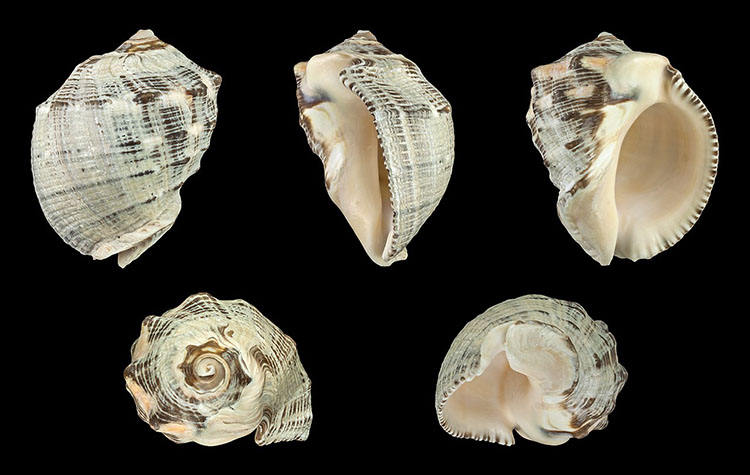 Different perspectives on the shell of Purpurea bufo.

Snails have three ways of sealing shut their shell.  They can possess either an operculum or a clausilium, calcareous structures that act like doors, or they can build themselves a dried mucous epiphragm.  Any individual species of snail will only use one of these methods to shut up shop.  An epiphragm is a disposable door.  Any time a snail wishes to rest, and be safer from predators and the weather it can secrete a layer of quick drying muscous from its foot that is stretched across the opening of the shell.

Once the snail becomes active again the epiphragm is broken and lost.  When the snail wishes to retire from the world again it must make a new epiphragm.  Some snails, such as the edible Helix pomatia create a general mucus epiphragm for short daily periods of rest, but make themselves a different, harder epiphragm, prior to their annual hibernation. This kind of epiphragm is a more solid structure composed mainly of calcium carbonate.

Although the operculum and the clausilium are similar in that they act like doors to seal shut the snail’s home they evolved separately, occur in different families of snails and operate using different mechanisms.

The gastropod operculum can be either calcareous (made of calcium carbonate) or corneous (made of material like horn).  It is usually located on the upper surface of the foot toward the back of the body.  In this way it can be drawn up to seal the shell like a trapdoor.  The shape of the operculum is governed by the cross-sectional shape of the last whorl of the shell. I some species they are nearly round, but in others they are more attractively shaped.

In comparison a clausilium is always calcareous and is method of operation is more complex.  The clausilium is located inside the snails shell and can be slid into place.  The shape of the clausilium varies in different genera of snails, it can be tongue-shaped, spoon-shaped or spatulate. To help it move the way the snail wishes it to the longer and thinner end of the clausilium slides in a groove which is formed by spiral folds on the inside of the shell around the columella.

In quite a few species, aberrantly coiled specimens occur. Meaning some individuals have shells coiled in the opposite direction to the majority of the population.   This can cause a snail problems because a right-handed snail cannot mate with a left-handed snail.  This is a result of the positioning of the genitalia in relationship to the shell coils.

In the freshwater snail Lymnea stagnalis about 2.0% of the population are sinistral.  Furthermore, fans of escargot (snail for dinner) report that in Helix pomatia, perhaps the most eaten terrestrial snail, one specimen in several thousands will be sinistral.

These are humorously referred to as King Shells.  Among shell collectors shells displaying aberrant spiraling, ether sinistral in a dextral species or dextral in a sinistral species, are highly sort after.  Rare sinistrally coiled specimens of normally dextral cowries for instance can fetch prices in excess of US $1000.00. 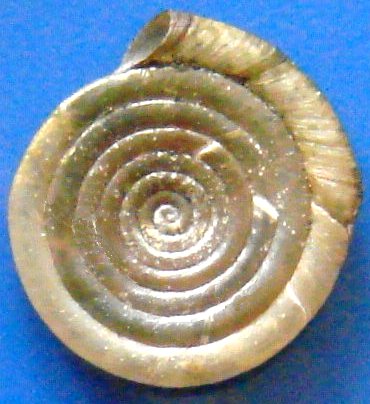 A few species of snails have shells that are neither dextral or sinistral.  This is because they are flat coiled.  This is called planispiral coiling.  The dextral – sinistral distinction is obvious in most snails because the snail’s shell is normally in three dimensions with an obvious up side and down side.  However if the coiling is flat, only through two dimensions, then there is no up or down – and the right side or left side look exactly the same. The freshwater snail Anisus septemgyratus is an example of a planispirally coiling snail.

The choice of coiling direction actually reflects the direction of torsion, which as it occurs in the juvenile state predates shell development.  Some research published in 2019 shows that the difference between dextral and sinistral coiling in snail shells is the result of a single gene called Lsdia.  Lsdia1 results in dextral coiling and Lsdia2 in sinistral coiling.  If both genes are present Lsdia1 is dominant.

For example, the aperture of the shell must expand to generate the basic cone shape, and in a simple Raup model of shell growth, the helical coil would be generated by greater extension at the dorsal side of the mantle aperture relative to the ventral – and greater aperture extension on the side near the apex relative to the abapical side.