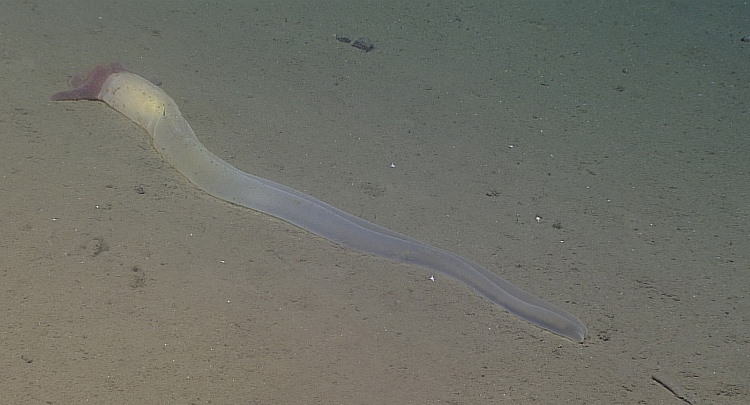 Etymology: From the Greek Hemi for half, and the Latin Chorda a chord.

The Hemichordates (or Acorn Worms) are a small phylum of generally small animals, that were once considered to be a part of the Chordata.

They are all marine worm-like animals. There are only about 90 known species, all of which are benthic (living on the sea floor) in their adult form. The smallest species are only a few millimetres long and the largest, Balanoglossus gigas can reach lengths of 1.5 metre (4.7 feet).

All known species feed on small particles of organic matter, either as filter feeders of as substrate eaters. They have a wide distribution and can be found in most of the world’s waters, both in shallow coastal waters and in the deeper seas.

The basic hemichordate body plan is tripartite (in three sections):

The first section is called the ‘Protosome’. This is a modified proboscis and in many species it is short. It is these species that have given the Hemichordates their common name of ‘Acorn Worms’.

The protosome is followed by a ‘collar’, which bears tentacles in the Pterobranchia but not in the Enteropneusta. Behind this is a ‘trunk’, which contains the digestive and reproductive organs.

The phylum hemichordata is divided into two classes, the Pterobranchia and the Enteropneusta. The two classes share some attributes but are quite different in others.

Note: the colours in the anatomy diagram above do not represent the real colour of the animal, but are used to emphasize the different body sections.

The Enteropneusts, with more than 70 species, comprise the majority of the Hemichordata. They are the typical Acorn Worms. They live in burrows in the substrate (mud or fine sand) or under rocks, in both shallow and deeper waters. Feeding is either filter feeding or substrate eating. The proboscis is small in both types and the collar is very small.

Substrate eaters like Balanoglossus clavigerus from the Mediterranean are generally larger than filter feeders. They consume large amounts of mud and/or sand and digest the organic matter within it.

They deposit their wastes on the surface, much like earthworm castes. Their burrows may have several openings at one end. They seldom leave their burrows.

Filter feeders have mucous secreting glands and numerous cilia on their proboscis. The proboscis is held out of the burrow entrance and organic particles are caught in the mucous, which is swept to the mouth by the beating of the cilia. These species can cover their mouth with their collar and thus avoid eating inorganic or otherwise undesirable materials.

The hemichordate digestive system is a through gut, ending in a terminal anus. Behind the mouth is a buccal cavity which leads into a pharynx which possess gill slits. These gill slits are believed to be used primarily to assist gaseous exchange (respiration). The Pharynx leads into an oesophagus, which in turn leads to an intestine which is the main site of digestion. The intestine leads ultimately to the anus.

Gaseous exchange occurs over the whole body as well as in the pharyngeal slits. The blood is colourless and has no respiratory pigments. It is forced through the animal’s few vessels by the beating of a muscular heart that forces blood through the central sinus. The heart constricts the sinus, but the blood does not actually enter the heart, so it is not a heart in the strictest sense. The blood passes through two longitudinal blood vessels and a series of sinuses.

The nervous system derives from a sub-epidermal net and is thickened in the mid-dorsal region of the proboscis and the mid-ventral area of the trunk into hollow nerve cords.

In the collar their are giant nerve fibres, but their function is poorly understood and the animal can survive reasonably well without them.

Reproduction can occur as a result of fragmentation of the adult’s body. However it normally involves the two sexes and egg fertilisation. Both sexes have numerous gonads and fertilisation is external. The females extrude egg masses onto the surface of the substrate from within their burrows (2,000 to 3,000 eggs at a time).

The males also release their sperm into the water. The sperm swim and seek out the eggs, which it is believed they detect chemically. The fertilised egg develops into a ‘tornaria’ larvae and lives as part of the plankton (floating in the sea) for several weeks – until it undergoes a metamorphosis into the 3 body sections that the adult possesses and sinks to the sea-floor.

With only between 10 and 20 species, the Pterobranchia make up less than one fifth of the Hemichordates.

They are small animals, ranging in size from 1 to 12 millimetres in length. Pterobranchs live in much deeper water than the Enteropneusts. This and their soft bodies means that they are difficult to study and much less is known about their ecology.

The proboscis is modified into into a shield, which secretes the collagenous burrow in those species that live in one. It is also used as an organ of locomotion, much in the way a snail uses its foot – both for movement inside and outside the burrow.

The collar is modified to produce between 1 and 9 pairs of tentacles or lophophore arms. These arms possess a double row of smaller ciliated tentacles. The tentacles secrete mucous, which is driven – along with the food particles trapped in it – to the mouth by the beating of the cilia. The mucous and the accompanying food particles are then digested.

The trunk is short and sac like, rather than being long and thin – and the digestive tract is U-shaped. The animal’s anus is then on the animal’s back, approximately opposite the animal’s mouth.

The truck ends in a contractile (can lengthen or shorten), prehensile (can grip like a monkey’s tail) stalk. This stalk is used for support in some species, but is joined at its farther end to a common stolon in colonial species.

Asexual reproduction by budding is common and often gives rise to colonies starting from a single individual. However sexual reproduction is the normal method of reproduction and it is similar to that in the Enteropneusts with external fertilisation. However, each animal has only a single gonad and the larvae is believed not to be a tornaria, though it is poorly known.

The Pterobranchs also differ from the Enteropneusts in the possession of only one, or in some species no, pharyngeal slits (Cephalodiscus sp. = 1, Rhabdopleura sp. = 0).

Because these animals are generally very small, there is no problem with respiration occurring simply across the body surface. Their other organ systems are similar to those of the Enteropneusts.

Well, I hope you have enjoyed this brief introduction to the hemichordata, phylum of the acorn worms. Perhaps now you’d like to learn about the goblet worms.