Home
inverts
Hirudinea: Most Marvelous Order Of The Leeches
Help us spread the word...
TwitterFacebookPinterest

This is a common response in a world where most people think of leeches – if they think of them at all – as being horrible, blood sucking monsters which we would be better off without.

I would like to encourage you to look again.

There are about 500 species of leeches or hirudinea known to science. Most of them live annual life cycles, meaning they live for one year. However some of the larger species will live longer.

The most obvious thought is the medicinal leeches.

Used for centuries to cure anything and everything that might possibly relate to the blood, they are still being researched today with medical concepts in mind. 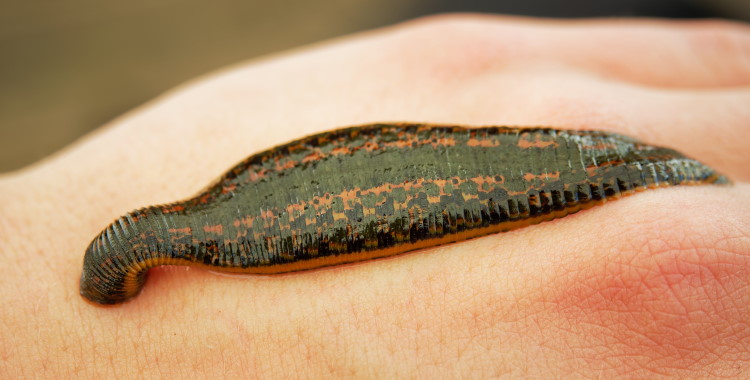 Millions upon millions of Hirudo medicinalis in Europe, and Haementaria officionalis in Mexico were dragged from their happy homes to be kept in unpleasant captivity, until it was their time to sup the putrid alcohol and other drug ridden blood of unhealthy humanity.

Many people made their living catching and selling them. To the extent that, in much of Europe, H. medicinalis is now an endangered species.

Some people may even owe their lives to the leeches. A single H. medicinalis can consume 5 times its own weight in blood, but then it doesn’t eat again for 6 months.

Most leeches have 33 segments but the number of segments actually looks a lot more than this.

This is because each segment has several rings (or annuli; singular annulus). In most leeches the segments are not well developed internally either, certainly less so than in the other annelids.

The segments are divided by a wall of connective tissue but otherwise most of the interior is filled with connective tissue. Apart from the Acanthobdellida (see below) there is no real blood system.

The suckers of leeches, one at both ends in most cases, work through a combination of mucous and the suction generated by circular muscles. The gut contains a large number of side pockets called diverticula which allow the animal to store huge quantities of blood from a single meal.

Technically speaking most leeches are not parasites because they only take one meal – or bite – from a host and then leave.

Rather, they are highly evolved predators.

Only a few leeches really are parasitic in behaviour, these include Calliobdella lophii which lives permanently attached to Angler Fish, Hemibdella soleae which parasitises Soles, several species of Ostreobdella which can be found in Oysters and various species of Theromyzon which live in the nasal cavities of some water birds.

Not all leeches are blood suckers either. Many species are straight forward predators on smaller invertebrates including insects, crustaceans and other annelids. These prey animals are sucked in and swallowed whole. 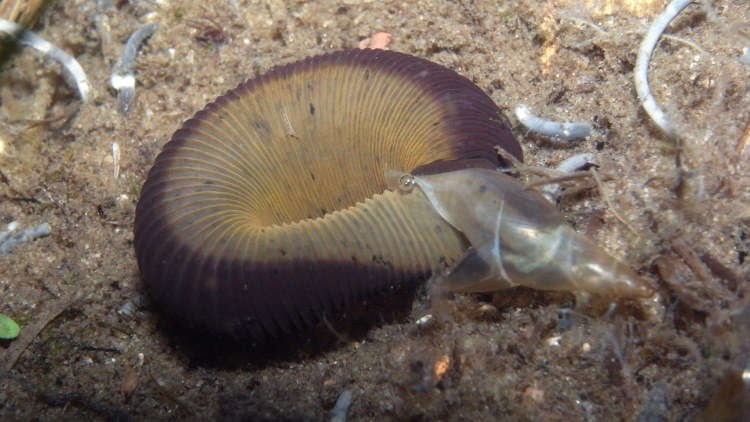 The Horse Leech, Haemopis sanguisuga (whose scientific name means blood sucker) does not suck blood at all. Instead it feeds mostly on smaller worms. Also the so-called Dog Leech Erpobdella octoculata is another example of a misperceived predatory leech. It has a long and strong oesophagus which it use to suck water snails out of their shells and it has no more interest in the blood of dogs than the Horse Leech has in the blood of horses.

Two of the largest leeches in the world, which both reach about 30cm (1 ft) in length are Americobdella valdiviana from Chile (which like those mentioned above is purely predatory) and Haementaria ghiliani from the Amazon basin. This last animal is a traditional blood sucking leech.

The most notorious leeches are the land leeches in the family Haemadipsidae, which are relatively common in South Eastern Asia, Oceania, South America and Madagascar.

Many of these leeches specialise in sucking the blood of mammals and the Ceylon Leech (from Sri Lanka) Haemadipsa zeylenica is a well known and serious pest to humans and their livestock.

Like all blood sucking leeches, these leeches posses a proboscis with a triple set of jaws (mammals have two jaws an upper and a lower one). Each of these jaws is equipped with a sort of semicircular chitinous saw, which can be moved backwards and forwards in order to cut through the skin of the host of prey. 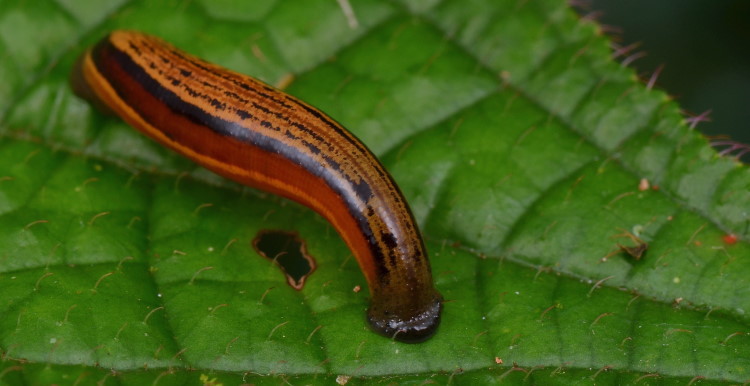 They also possess well developed salivary glands which secrete a substance called hirudin. This mixes with the consumed blood and stops it from clotting in the animals stomach.

They also secrete substances which have an anaesthetic effect, preventing the victim from being aware that the leech is feeding. The exact nature of these substances is still unknown.

While the leech is feeding, blood is pumped into the crop by the pharynx. The crop possesses special nephridia which remove up to 40% of the water from the blood. This reduces the volume of the blood, allowing the animal to actually store a greater volume of food.

The rest of the digestive tract consists of a stomach, a short straight intestine and an even shorter rectum which leads to the anus. Blood sucking leeches do not digest their own food. Instead, like so many animals from insects to cows, they rely on a special collection of symbiotic bacteria to do it for them. In the case of leeches the bacteria is called Pseudomonas hirudinis.

Hirudinea are members of the Clitellata and as such possess a clitellum. However unlike the Oligochaeta, leeches do not show the clitellum all year. Instead it only becomes visible during the breeding season.

Like the Oligochaeta, the leeches or Hirudinea are hermaphrodite. This means they possess both male and female reproductive organs. Normally several pairs of testes and one pair of ovaries, which share a single genital opening. During copulation both parties give and receive sperm.

The exception to this rule is the Gnathobdellids which are often protandrous, meaning they are reproductively male first and then female later because the male reproductive organs develop first.

In some species such as most Rhynchobdellids and Epicorids, a spermatophore is deposited on the partners skin. This then secretes enzymes which dissolve the mate’s skin allowing the sperm to enter its body. Once inside the body, they migrate to the ovisacs where fertilisation takes place.

Some other species possess a penis which is inserted into the opposite partners vagina before free swimming sperm are released.

During copulation the two animals lie ventral surface to ventral surface. In some species, the orientation is head to head but in others such as the Gnathobdellidae they lie head to tail. 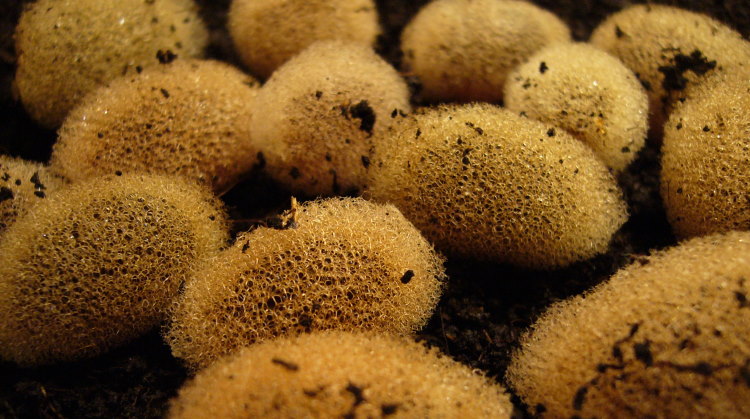 The young hatch inside the cocoon and remain there for some time after hatching. Newly hatched leeches look just like miniature adult leeches and feed on very small worms and the larvae of flies such as Chironomids.

Hirudinea or leeches all look pretty similar, being basically tubular and flatish when not well fed and thinner at the ends than in the middle.

The order Hirundinea is divided into 3 suborders.

Of these, the Rhynchobdellae is the smallest in that it contains only a single ancient species.

Acanthobdella peledina – a parasite of Salmonid fishes – is unique in the leech world because it possess some chaetae, an indication of its ancestral relationship to the other Annelids. Also, its posterior (rear) sucker is derived from 4 segments and not 7 as in all other leeches. Furthermore they lack an oral or anterior sucker and have only 30 body segments, rather than the 33 as do the rest of the leeches.

Well, I hope this has been an interesting introduction to the world of the Hirudinea!

But there’s still much more to learn. Why not learn about ragworm?