Etymology: From the Greek Kinema for motion, and Rhynchos for snout. Meaning “animal with a movable snout”.

The Kinorhyncha are a smallish class (100 species) of marine worms that was until recently considered to be a phylum. 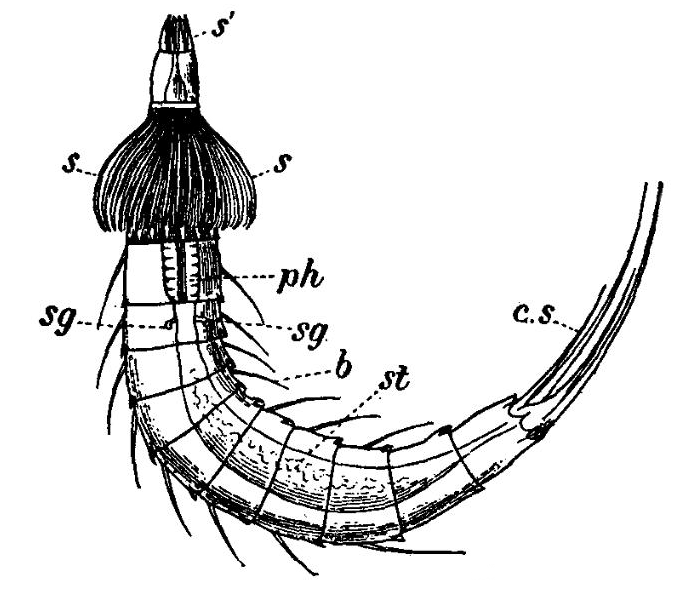 Kinorhyncha are not a very speciose phyla, with only about 188 species currently known to science and a number of un-named species awaiting classification. They live in marine sediments ranging from coastal, to depths of up to 5,000 metres – and have been found in all the world’s seas and oceans.

They can not swim and move by pushing their heads forward into the mud, extending their scalids then retracting the head into the body. Because the head is held in place by the spines, this has the effect of dragging the body forward. The spines can then be closed and the head pushed forward once more. They feed on diatoms and other organic matter they find in the mud.

The Biology of the Kinorhyncha

The Kinorhynchan body is comprised of a head, a neck and a trunk. The trunk has 11 segments or zonites.  The head and the neck each constitute a zonite on their own meaning the adult animal has 13 segments or zonites.  Each zonite has a single dorsal plate (tergite) and two ventral plates (sternites).

The head, which bears recurved spines or scalids and can be retracted into the trunk, and is therefore called an ‘introvert’. The head also bears an oral cone or mouth, surrounded by more spines called stylets. These oral stylets are anteriorly directed (point backwards).  There are nine outer stylets and three to four rings of inner stylets, each inner ring possesses 5 stylets.  Behind these can be seen five to seven rings of posteriorly directed scalids.  These are sensory, and or, locomotive spines. Each ring may have between 540 and 1,860 scalids. The neck is the second zonite and is made of up to 16 placids (plates), which can fold over the head when it is retracted.

The gut passes straight along the body and there is an anus at the posterior (tail) end of the body. Metabolic excretion and water balance are performed by a pair of protonephridia in the 10th zonite. Wastes are eliminated through a duct opening through the 11th zonite called a nephridiopore.

Kinorhynchans have a reasonably well-developed nervous system, composed of a nerve ring or brain which encircles the anterior (front) end of the pharynx, a double nerve cord (which runs down the ventral side of the body) and various other nerves and ganglia.

The Kinorhyncha are dioecious and gonorchoristic, meaning they have the two sexes separate, though to us they often look the same. In both males and females the gonads are paired.  The gonads are situated towards the posterior end of the body and the gonopore can be found between the 12th and 13th zonites.

Very little is known of their reproduction. The eggs are fertilized by a spermatophore attached to the female’s cuticle.  As best we know between three and six eggs are laid at one time.  The female encloses each egg in a capsule.  The development is direct and the larvae that hatch out with 11 segments, the last two segments are acquired after several moults.  The hatched  larvae are free living and go through at least 6 moults of their cuticle before they reach maturity.

No kinorhyncha fossils have yet been found.