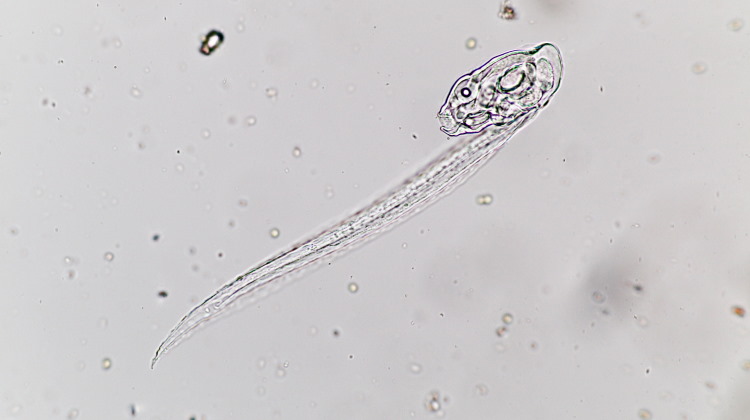 The Larvacea (also called Appendicularia) are small animals quite different in form to the rest of the Urochordata.

Larvacea are extremely common in the surface layers of many warmer waters.

Only about 70 species are known to man and they are all planktonic.

Their body consists of a basically oval trunk and a relatively long thin tail. This tail, which contains the notochord, is retained all through the animals life. Unlike the rest of the Urochordates, where it is lost before maturity, or even during embryogenesis.

In order to feed they first secrete a gelatinous ‘house’ around them. This ‘house’ encases the trunk or body, but not the tail. The tail has muscle cells attached to it and the Larvacean uses it to swim.

The house contains some very fine filtering equipment and Larvacea feed on far smaller particles than their fellow Urochordates. Particles as small as 1 micron can be trapped in these filters.

This means that Larvaceans are one of the few animals to feed on the numerous coccolithophorids which abound in the oceans of the world. The larvacea house is quite a complex structure, ensuring water flows through in only the desired channels. It is however the same colour and density as sea water and therefore difficult for us to see.

In the diagram above I have coloured parts of the house and the animal to make them easier to see, but these are not their natural colours.

The water flows in through two inhalent openings on either side of the animals head. These two streams flow down near the edges of the house, up through the filter system and then down again – now as one single stream – and out through the single exhalent opening.

The screens and filters become clogged up with detritus quite easily and the Larvacean has to abandon it and secrete a new one every 4 hours or so. The entire structure is about the size of a walnut, or 2.5cm or 1 inch across.

Larvacea are entirely sexual in their reproduction. Most species are hermaphroditic (each animal is both male and female), but at least one species is gonochoristic (meaning each animal is either male or female).

In the hermaphroditic species, the testis mature before the ovaries thus preventing self fertilisation. The sperm are released into the sea and then the eggs (ova) are released.

The release of the ova is by means of rupture of the body wall, thus the animal dies in the process.

The eggs are fertilised in the sea and the resulting larvae looks much like a miniature Tunicate larvae. It does not remain so for long however, but soon metamorphosises into a small adult Larvacea.