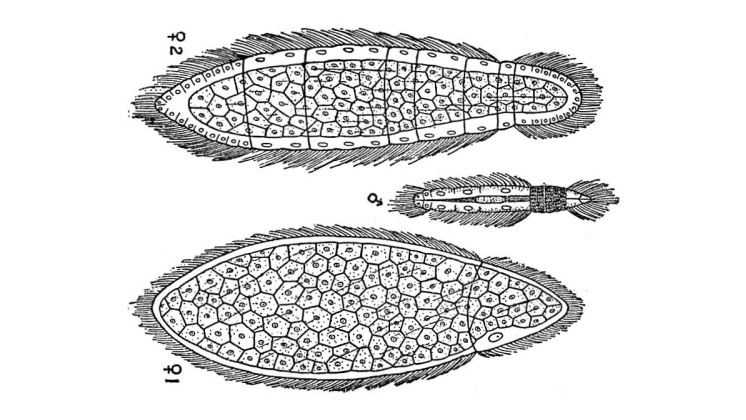 The mesozoa is an obsolete taxonomic term.  For a long time it was a phylum of extremely simple parasitic marine worms, however the phylum has now been divided into two separate phyla.  The Dicyemida (parasites of Cephalopoda) and the Orthonectida (parasites of Annelida, Echinodermata, Mollusca and Platyhelminthes).

The evolution of our knowledge of this group has passed through several stages.   The monophyly of the group was called into question, on morphological grounds as early as 1990

The phylogenetic affinity of dicyemids and orthonectida was called into question on the grounds of morphology by Kozloff, 1990, this idea was supported by Brusca and Brusca, 2003; and then by Ruppert et al., 2004.  By 2010 it appeared they were definitively two separate orders.  Then in 2017 Lu et. al., published some research based on phylogenomic analyses that suggested the Mesozoa was really a monoplyletic group and that the old taxon of Mesozoa as an order should be reinstated.

This was not the end of the story to date.  For a small group of organism (less than 100 known species) they have received a lot of research time.  The following year Schiffer et al. (2018) using a dataset of 469 orthologs (190,027 alignment positions) from 29 spiralian species, including an orthonectid and two dicyemids, concluded that the Orthonectida and the Dicyemida had evolved independently within the Lophotrochozoa.  Their data showed that the orthonectids exhibited a clear affinity to the annelids, and that the dicyemids occupied an isolated position within Lophotrochozoa.

Finally (to date) in May 2019 Zverkov et. al. published the results of a larger study which supported the work Schiffer et. al. 2018.   So the conclusion so far maintains that the old concept of the Mesozoa is discontinued and has been replaced with two new orders, the Dicyemida and the Orthonectida.