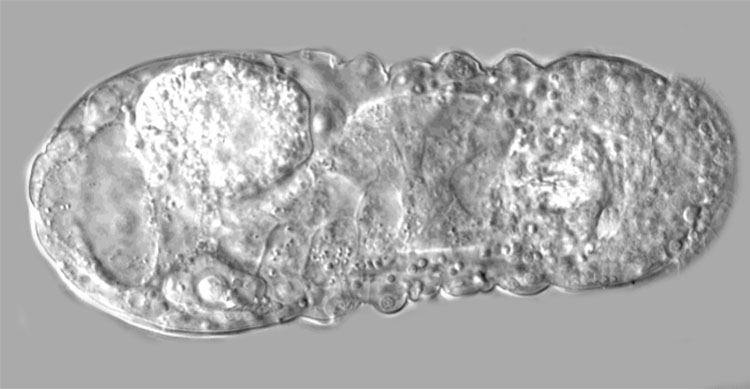 Etymology of Micrognathozoa: From the Greek Micros (for very small) Gnathos (for jaw) and Zoon (for animal)

There is only one species of Micrognathozoa known to science (COL).

The micrognathozoa is a relatively new phylum of animals as it was only described in 2000.  So far only a single species has been found or described.  That species is Limnognathia maerski, it has no common name.

It is a microscopic species being only about one tenth of a millimeter long (the length of the first specimen studied = 142 μm, and the maximum width of the abdomen was 55 μm).

The first specimen was found in a cold spring on Disko Island, Greenland in 1994, it was first described by Kristensen and Funch in 2000.   Since then other specimens have been found in other springs and lakes in Greenland and on the Crozet Islands in the South Pacific ocean.

L. maerski is famous for having one of the most complex jaw apparatus known in the animal kingdom.  Within its pharynx it actually has four sets of jaws.  The exact details of the various parts of the jaws have not yet been studied fully or fully described.   The phylum is related taxonomically to two other phyla of microscopic animals; the Rotifera and the Gnathostomulida.

The micrognathazoan body consists of a two-part head, an accordion-like thorax and an ovoid abdomen with a small tail.  The animal possesses a number of cilia that it can use for locomotion.   Limnognathia also has an adhesive ciliary pad which is located dorso-ventrally. This consists of ten ciliated cells, which create a very sticky glue. Limnognathia has a complex jaw mechanism, but an otherwise simple gut ending in a posterior anus. The anus seems to only work occasionally and is not constantly fully functional.

Micrognatozoans likely spend most of their life crawling slowly through the moss in the cold freshwater ecosystems they inhabit, however they can also swim in a spiral path.  They feed on micro-organisms such as bacteria, blue-green algae and diatoms.

All specimens of L. maerski collected so far have been female. Therefore reproduction, as far as is known, is parthenogenetic.  Female Limnognathia lay two different types of eggs. Type one is thin-walled eggs and hatches quickly.  Type two are thick-walled and believed to be able to survive the freezing temperatures of Greenland’s winter and hatch in the spring. This makes it possible for the species to over-winter, as the adult animals cannot survive freezing.

It is considered possible that the species may produce males that are very much smaller than the females and also short lived, they mate and die, or that young Limnognathia hatch as males and then become females, which would make them sequential hermaphrodites.

Image Credits:-  Cover Image adapted from Kristensen and Funch in 2000.