Home
inverts
Nematodes: Phylum Of The Ubiquitous Round Worm
Help us spread the word...
TwitterFacebookPinterest

The Nematodes; Phylum Nematoda (Round Worms)

Etymology: From the Greek Nema for Thread, and Eidos for form.

Nematodes (Round Worms) are the second most speciose invertebrate phylum after the arthropods and the Mollusca.  They occur in nearly every habitat, including as parasites in all sorts of plants and animals (they don’t like dry places however).

One species is known that can live in old vinegar (Turbatrix aceti) and another, (Panagrellus redivivus) is most commonly found in German beer mats.  However P. redivivus is also known to aquarists as it is used to feed very young fish.

Though only about 25,000 species have been described, some scientists estimate there may be as many as a million species all told. They can occur in very dense numbers in the soil and rotting vegetation. As many as 90,000 have been found in a single rotting apple, while millions occur in the top 3cm (1 inch) of a square metre of good quality soil.

While there are a huge number of free living Nematodes, there are also a large number of parasitic species. Many of these cause diseases to man and other animals, as well as to plants. In fact nearly every living organism has been found to be parasitised by one species of nematode or another.

Most nematodes are reasonably small, they range in size from 100 micrometres in length (1/10th of a mm or 1/250th of an in) to the female Giant Nematode Dioctophyme renale which may be up to 1 metre, or 3 ft long. 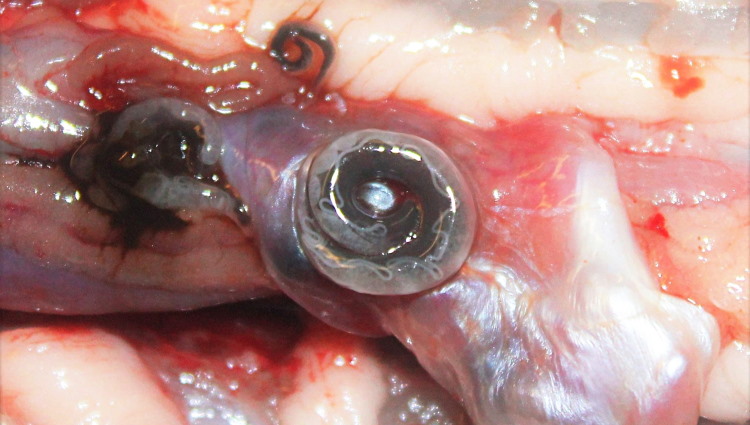 Free living nematodes are long, thin worms with transparent and typically curled bodies. Parasitic species have a variety of less streamline shapes relating to their degenerate parasitic life styles. One unifying characteristic that makes the phylum unique, is the lack of cilia or flagella – even the sperm of nematodes are amoeboid.

Nematodes as parasites have been known for a long time and the earliest recorded literary mention of them is an Egyptian papyrus from 1500 BC. They are also mentioned by the ancient Greeks, Aristotle and Hippocratis the father of scientific medicine.

Nematodes live in a vast variety of habitats. Ecologically, they can be divided into free living forms and parasitic forms. Free living forms have a simple life cycle involving 4 juvenile instars on the path from egg to adult. Parasitic species have developed a wide range of variations on this basic theme.

The variations involve whether there is a secondary host and the amount of time spent in one or either hosts. There is also considerable variability in the way they move from one host species to another. Thus, many species lay eggs that pass out of the primary host with the faeces, where they are eaten by the secondary host, which then gets eaten in turn by the primary host after the Nematodes have developed. 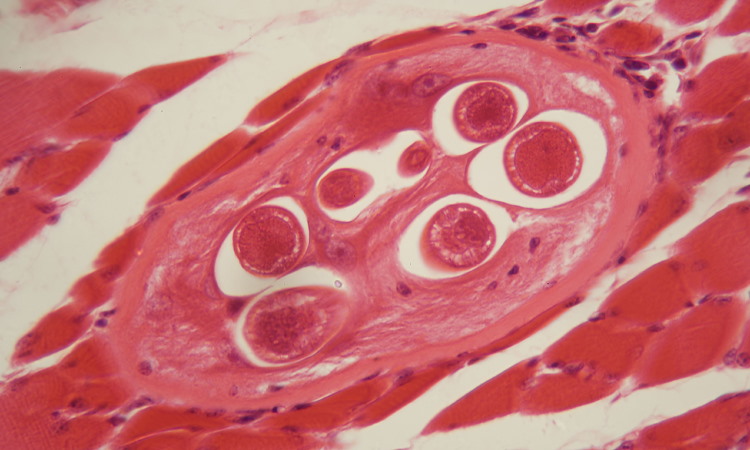 Trichinella spiralis larvae in muscle tissue under the microscope

Because it is not always totally reliable that the secondary host will be eaten just as the Nematode larvae have developed into the infective stage, many species have the ability to encyst themselves in the muscle or cuticle of their secondary hosts.

Some species use another animal to transport them from one host to another. Thus Wuchereria bancrofti releases minute live young called ‘microfilaria’ into the primary host’s blood stream, rather than eggs into the digestive tract.

These microfilaria get ingested by mosquitoes when they feed on an infected person. Inside the mosquito, they live in the mosquitoe’s gut where they develop until the Larva 3 stage. They then wait for the mosquito to bite another host, whereupon they enter the host via the mosquitoe’s proboscis sheath and the wound it makes in the host’s skin.

Human beings, along with all other living things, are host to numerous Nematode parasites.

The most common of these is Ascaris lumbricoides, with an estimated 700 million people effected globally. This Nematode is not normally fatal and in low numbers may have very little effect on adults. However in heavy doses it can be quite debilitating, especially for children.

The Nematodes infecting mankind include several species of filarial worms. The most important of these are Wuchereria bancrofti and Brugia malayi (which are very similar and cause lymphatic filariasis), Onchocerca volvulus (which causes River Blindness) and Loa loa (which causes Loiasis).

Basically a Nematode is a long hollow tube within which is another tube, the alimentary canal and the reproductive organs. Nematodes are round in cross section.

This is because, unlike the other worms that are below them in the phyla table, they maintain their body fluids under great pressure (on average, internal pressure in a nematode equals 70mm of mercury or 1.49 PSI – with a maximum recorded value of 125mm of mercury or 2.41 PSI).

To contain this high pressure, nematodes have an extremely tough, yet elastic and flexible cuticle. This cuticle consists of up to 9 layers of proteinaceous fibres. With 3 layers being easily discerned, these are called (from the outside in) the cortex, the matrix layer and the fibre layer. 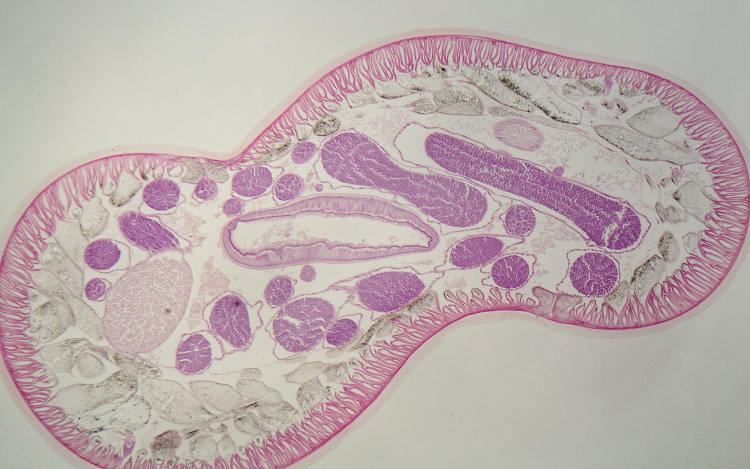 Despite its complexity, the Nematode cuticle is permeable to both water and gases – so respiration occurs through it. Beneath the cuticle is a hypodermis and a layer of longitudinal muscle. The combination of the flexure of these muscles, with the high pressure of the system, produces a characteristic whip-like wriggle that Nematodes use to swim.

Scientifically this is called undulatory propulsion with sinusoidal waves passing back along the body.

At the anterior (head) end there is a mouth which has 3 lips – behind which predatory species possess a few teeth. This leads to a pharynx which is triangular in cross section.

Because of the high pressure within the body, unsupported organs such as the intestines tend to collapse… in much the same way that an un-inflated bicycle tube tends to become oval or flat in cross section, when laid flat on the table.

This pressure is so great that the parasitic nematode Ascaris lumbricoides which is about 12cm to 18cm long (5 to 7 inches), may shoot its faeces 60cm or 2 feet into the air.

Nematodes, especially free living forms, generally have a reasonably well developed nervous system. This is comprised of a circum-pharyngeal nerve ring made up from 4 nerve ganglia, from which 6 longitudinal nerves extend down through the body to the various parts of the gut and the reproductive organs. There are also 6 shorter nerves which extend forwards from the circum-pharyngeal ganglia towards the mouth.

Nematodes have no circulatory or respiratory organs and the excretion of metabolic waste is via two simple ducts, or tubules, which have no nephridia or flame cells.

Fertilisation is internal and females lay eggs over a prolonged time period. Thus a female Ascaris lumbricoides may lay her eggs at the rate of 200,000 per day and have had a total 27 million eggs within her at the start of her reproductive career. Young nematodes hatch from these eggs and go through 4 moults before they become adults.

Further information can be found on Tolweb. Below are two lists of organisms and the Nematodes that infect them. This is only a minute example, covering only two groups of organisms: Commercial Plants and Domestic Animals.

In the plant list, many of the species listed for one plant group also infest other plant groups.

Some Nematode Parasites of Commercial Plants

I hope this introduction to the nematodes – these round worms – has been useful.

These parasites, while perhaps not beautiful, are more than worthy of our study. Perhaps now you’d like to learn about another parasite, the horsehair worms.