Home
inverts
Nemertea: Phylum Of The Ribbon Worm And Its Amazing Proboscis
Help us spread the word...
TwitterFacebookPinterest

Etymology: From the Greek Nemertes a sea nymph, daughter Nereus and Doris in Greek Mythology

The Nemertea (Ribbon Worms) show the most advanced development of all the acoelomate phyla. In some books they are also referred to as the Rhynchocoela, Nemertinea, Nemertina, Nemertini or ‘Proboscis Worms’.

They are a quite successful phylum (900 named species) of mostly marine worms that are generally characterised by being extremely long and thin. Lineus longissimus has been recorded being 30 metres long, while still only a few millimetres wide.

Some scientists estimate they may reach 60 metres in length. If a specimen this long is ever found, it will become the longest animal in the world.

Nature likes to experiment however, so not all Nemerteans are long thin marine worms. Some live in freshwater, such as Potamonemertes sp. and Dichonemertes sp., a few are even terrestrial in damp habitats like Geonemertes sp., while others yet are quite chubby, Dinonemertes investigatoris can reach 5.6cm or 2.5 ins in width.

The Nemertea are believed to be an ancient order, with their origins in the Cambrian period over 500 millions years ago. However because of their soft bodies, fossil Nemerteans are nonexistent as far as I know. 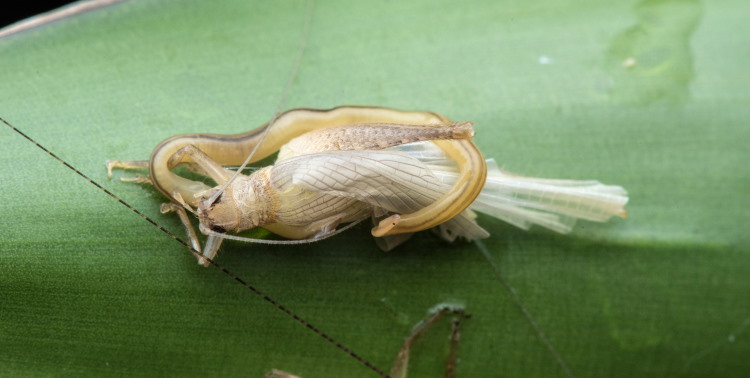 Most Nemertea are dioecious (having two separate sexes), free living organisms that like to spend much of their time beneath rocks or thick algal growth, or else burrowing into soft mud or sand. Though most of the free living species live on the sea floor near the coast, some have been recorded from depths as great as 4,000m. There are a number of genera adapted to live permanently swimming at sea, where they feed on other planktonic organisms.

The 4 species in the Genus Malacobdella live commensally in the mantle cavity of bivalve mollusks. They do not feed on mollusc tissue, but as far as is known, the mollusc’s gain no advantage from the Nemertean’s presence.

Various species are also commonly found in the pharyngeal cavity of tunicates. The 4 or 5 species in the genus Carcinonemertes are parasitic on crabs, usually female crabs. Otherwise, Nemerteans are mostly carnivores or scavengers on recently dead animal remains.

The commensal Malacobdella species are filter feeders on small organisms that enter their host’s/partner’s mantel cavity with the inflow of water. Thus it can be seen that Nemerteans occupy a wide range of habitats.

Note: Species of animal that live in the open oceans are called ‘marine pelagic species’ while those that live on the sea floor near the coast are called ‘littoral marine species’.

Most Nemerteans are carnivores and many have voracious appetites. Some species, such as Lineus corrugatus, have very cosmopolitan diets eating anything they can find.

In aquariums, these species have been fed on cooked animal fats and tinned sardines in tomato sauce.

Other species appear to have more specialised diets, such that Paranemertes peregrina shows a strong preference for the annelid worm Platynereis bicaniculata, but will feed on other polychaetes as well. Amphiporus lactifloreus however, has only ever been observed to feed on a single species of crustacean, Gammarus locusta.

Terrestrial ribbon worm with its prey

Nemerteans appear to detect their food either chemically – particularly this applies to already dead items – or by blind chance. Even some species that possess both eyes and cerebral organs, do not necessarily use them to locate prey when hunting (i.e. Paranemertes peregrina when hunting polychaete worms on mudflats at low tide).

Carnivorous Nemertea use their proboscis when hunting. In those species with unarmed proboscis, the proboscis is shot out of its cavity and wrapped around the prey item. Toxins may be injected into the prey’s body through holes made by special structures on the proboscis called rhabdites.

Those species with armed proboscis have special spines or stylets on the end of the proboscis. These stylets pierce the body of the prey and inject toxins. Generally in these species, the proboscis is not wrapped around the prey. In either case, common prey items are normally quickly subdued (in less than a minute) and drawn towards the mouth by the proboscis as it is returned to its sheath.

Most Nemertea reproduce by sexual reproduction, being either male or female. However some freshwater and terrestrial species are hermaphroditic and can be self fertilising. In a very few species, the eggs are retained within the female and hatch as small copies of the adult to then be released into the world.

The gonads are temporary structures only, developing during the breeding season and then degenerating again.

Each ovary or testis has its own duct to the outside. Normally the eggs are laid in gelatinous strings and the sperm released into the water near them, so that fertilisation takes place outside of the female’s body. The development of the eggs can be either direct or indirect.

Indirect in development in Nemerteans occurs in 3 forms. The egg either becomes a pilidium larvae, a Desor larvae or an Iwata larvae. 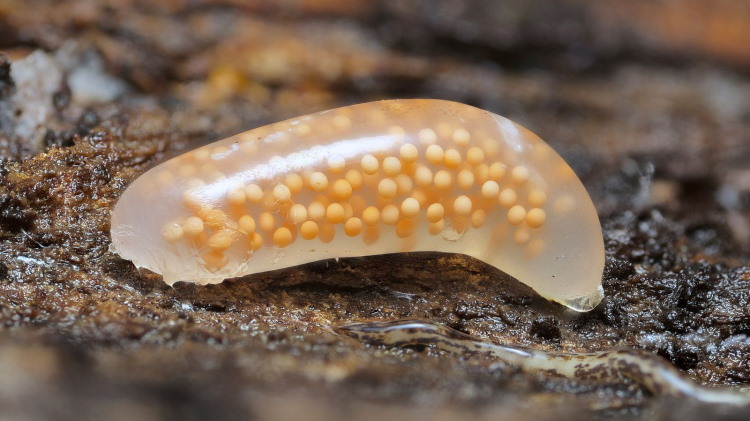 This is an egg-case of A. australiensis, a terrestrial nemertine, or proboscis worm

The pilidium larvae looks like an old Roman legionnaire’s helmet, with a tuft of cilia arising from the top. It also has a lot of shorter cilia which beat regularly, to generate a currents of water towards the mouth. After a short feeding period this then undergoes a metamorphosis to become a small adult-form juvenile Nemertean.

The Iwata larvae is found only in one species, Micrura akkeshiensis, and is free swimming. The Desor larvae is characteristc of species such as Lineus ruber and does not swim. Neither of these larval forms feeds – and after a time of development they undergo a metamorphosis to a an adult-form juvenile.

A number of Nemerteans can reproduce asexually through fragmentation of the body. Nemerteans have a good ability to regenerate damaged tissue and this form of asexual reproduction is related to that ability. Smaller fragments of the parent animal may secrete a mucilaginous case to develop in – this is called a cyst.

Nemertea are distinguished by their having a long protrusible proboscis, that is housed in a separate fluid filled cavity called the rhynchocoele.

This proboscis may be coiled within the rhynchocoele and be longer than the animal’s body. Hence the name ‘proboscis worms’.

The proboscis itself can be either armed with spines or unarmed. 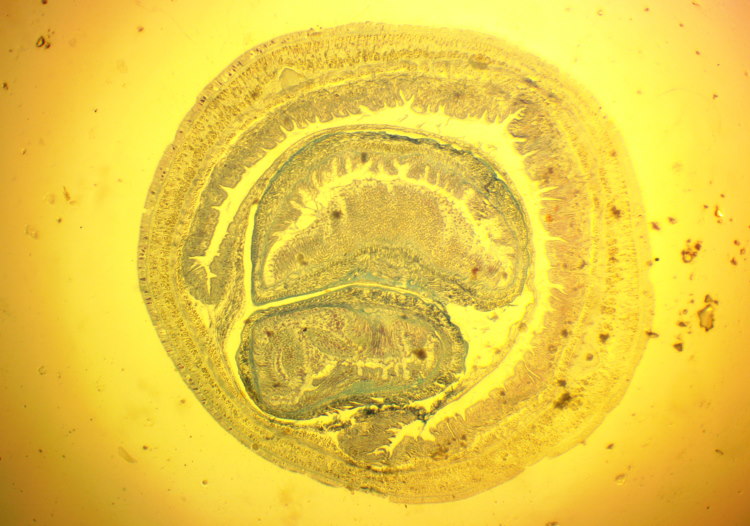 Nemerteans have a well developed blood system, with two types of blood vessels but no heart. The blood vessels have valves and some have muscle layers, that allow them to constrict thus causing the blood to flow.

The blood of Nemerteans is general colourless, though is some species the corpuscles may be coloured green or red.

Nemerteans have a well developed nervous system with cephalic ganglia and a nerve network connecting various sensory organs. Usually there are a pair of cerebral ganglia, a pair of large ganglionated nerve cords as well as main nerve net.

Many Nemerteans possess eyes, from two to two hundred per individual. They are located towards the front of the animal’s body near the cephalic ganglia. Other sense organs possessed by Nemerteans include cephalic grooves and sensory pits, both with chemotatic functions.

The Nemertean gut is basically a ciliated tube running from the mouth to the anus. A metabolic excretory system exists in most Nemerteans, in the form of pairs of nephridial ducts. There may be from two to three hundred pairs of ducts in a single animal.

Well, I hope this brief introduction to the world of ribbon worms – or proboscis worms, if you prefer – has been interesting.

While they may not be beautiful animals, they are surely worthy of our most sincere study.