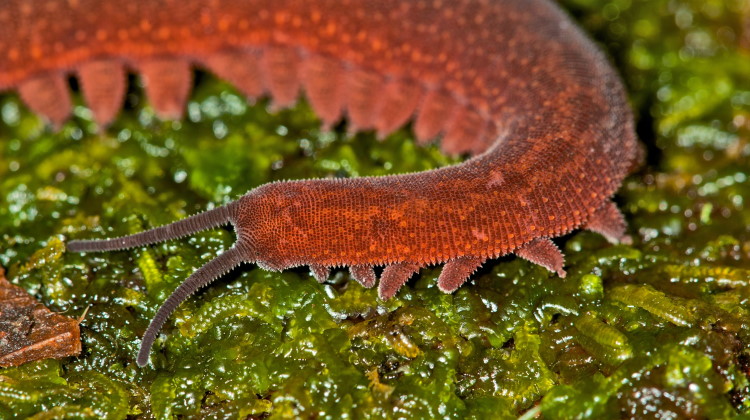 Etymology: From the Greek Onychos for claws, and Phoros for bearer.

Characteristics of the Onychophora:

The Onycophora are a small phylum of about 70 species of quite fascinating animals, often referred to by the common name of Velvet Worms, Walking Worms or Peripatus.

They are nearly all tropical and subtropical in distribution, though there are a few temperate species in the Southern Hemisphere. They range in length from 1.5 to 15 cms and have between 28 (14 pairs) and 86 (43 pairs) of unsegmented walking legs.

They are often colourful animals. There is at least one white cavenicolous (cave dwelling) species, otherwise they come in various shades of grey, brown, orange, red, green and even blue.

Onycophorans are ancient animals. Many of the earlier forms were marine, such as the members of the genus Aysheaia whose fossils are found in rocks which are 540 million years old. This means there have been Onycophora living on this planet ever since what is called the Cambrium period of prehistory.

Modern Onycophorans, though they are all terrestrial, are still poor at maintaining their body’s water balance and thus are only found in damp, moist habitats.

Onycophorans are normally nocturnal. Many Onycophora have their cuticle covered in tiny tubercles. It is these that give the animal the velvety texture from which they gain their most popular common name: Velvet Worms.

Onycophora have a mixture of morphological traits which make them effectively a cross between the Annelid worms and the Arthropods. However, our most modern understandings suggest they do not represent a missing link between the worms and the arthropods. Instead, like the Tardigrades, they are looked on as a separate line of evolution that arose independently from some long forgotten ancestor.

Onycophorans have a cuticle but it is amazingly thin, only 0.001 millimetres thick. This means it is flexible and cannot act like an exoskeleton, as does the cuticle of Arthropods.

Rather they have what is known as a hydrostatic skeleton, supported by a layer of smooth muscles in the body wall. A hydrostatic skeleton is generally a fluid enclosed in a muscular wall. Because the fluid is trapped under pressure in a limited area, it becomes semirigid (in the same way the air in a balloon renders it rigid) which allows it to be used as a skeleton.

This and the fact that metabolic wastes are secreted by means of a series of paired ciliated ducts (known as nephridia) are the main characteristics that link them with the Annelida. The fact that the body is primarily a haemocoel, that they have legs, longitudinally partitioned blood sinuses, a heart with ostia and jaws derived from walking legs all link them to the Arthropoda.

Onycophorans have three pairs of modified legs making up their head region.

The first of these are the two thick stubby antennae. Onycophorans have only a pair of small, simple eyes. This and their nocturnal habits mean that their antennae are their main organs of perception.

The second set of modified limbs is a pair of short, limb-like organs called the oral papillae. These secrete a sticky substance which dries on contact with the air. They can squirt this fluid up to 50 centimetres (1.5 feet). They use it both as a means to deter predators and as a means of capturing the small prey animals they feed on.

The third set of modified limbs are the jaws of the mouth, which operate across the axis of the animals body – as in insects – rather than along the body axis as in vertebrates like us. The legs of onycophorans are unjointed and have a series of pads towards their ends and a pair of claws at their tips.

Onycophorans are predatory animals feeding on insects and molluscs, which they trap in the sticky spray of their oral papillae. The jaws are then used to break through the prey’s cuticle. Next, saliva is secreted onto the exposed flesh and the partially digested mush sucked up through the pharynx into the gut.

To facilitate this, the mouth has an ‘oral ring’ which gives it a sucker-like shape and allows it to form a seal over the wound.

Velvet worms are gonochoristic, meaning they are either male or female. Very little is know about their courtship.

Onycophora show a variety of reproductive strategies. A few species are oviparous, meaning they lay the eggs outside of the body. Most others retain the eggs inside the body, within the mother’s uterus, but not attached to the mother’s body. They receive no further nutrients once fertilised and the mother’s body serves only as a safe and environmentally stable habitat for them to develop in. This is called ovovivapory, or being ovovivaporous.

A few Onycophora keep the eggs within the female’s uterus and they are maintained in contact with a sort of placenta. They gain nutrients slowly throughout their development from the mother’s system. This is known as vivapory or being vivaporous – and though common among mammals is quite rare for invertebrates.

In both these last two examples, the young are live born. Meaning they leave the mothers body as small, fully formed velvet worms.

Onycophorans have a tracheal system for gaseous exchange. This is a series of small pipes or tubes that lead from spiracles on the animals cuticle to various parts of the animal’s interior. This allows air from the outside to reach all the body’s organs. Unlike the spiracles of Arthropods, Onycophoran spiracles cannot be closed, which means they cause the animal to lose moisture rapidly in dry conditions. This is one of the reasons they are limited in distribution to damp habitats.

The blood system of Onycophorans is similar to the basic arthropod plan, with the body organs being contained within a haemocoel filled with blood. This blood is kept in constant movement by the beating of a hollow tube-like heart, but there are no veins or arteries.

Onycophora have a well developed brain which lies dorsal to (above) the pharynx. It is linked to the rest of the body by a pair of ventral nerve cords and a series of cross-connecting nerves in each body segment.