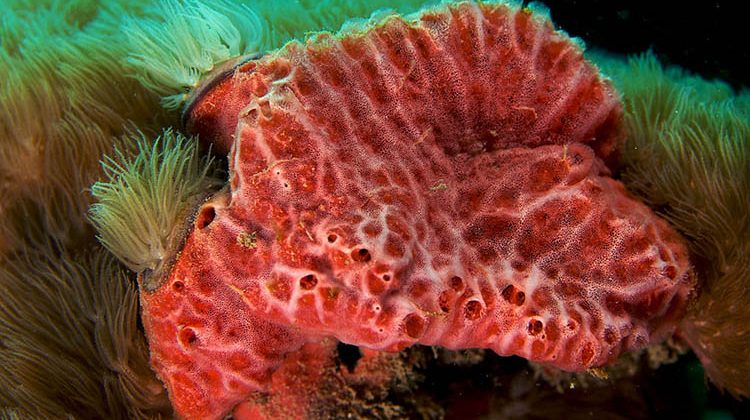 Etymology:- From the Latin porus for pore, and Ferre to bear. Hence: an animal with with pores.

Introduction To The Porifera

Porifera (Sponges) are one of the better known groups of invertebrates. Due to their usefulness in the bath, many people who care nothing for invertebrates at least know their name and may even have seen a sponge’s skeleton on sale in a shop.

One of the more amazing things about sponges is their ability to suffer damage. Because the cells are not linked in a tissue, it is possible for them to be separated and then come together again.

Some species, such as the freshwater sponge Ephydatia fluviatilis, can be pushed through a sieve. Then, if given time, the individual cells will come together again and make a new sponge.

A sponge is a simple organism that is easy to describe:

A sponge is a sedentary, filter-feeding metazoan which has a single layer of flagellated cells that drive a unidirectional current of water through its body.

Such a brief description though does not do them justice. Porifera are an ancient and highly successful group of animals. In the Palaeozoic, they are believed to have comprised more than half the biomass in marine reefs. They have been living in the waters of the world for more than 600 million years, and can now be found in all marine and many freshwater habitats.

Sponges occur in rivers and streams, from rock pools to the deep ocean depths, from frozen arctic seas to the warm tropical seas. They are perhaps at their most beautiful in tropical marine seas.

There are about 10,000 known species and though their basic organisation is pretty simple and remains fairly constant throughout all the species, they do manage to show a great variety of forms.

The body of a sponge is a collection of a few different types of cells, loosely arranged in a gelatinous matrix called a mesohyl, mesoglea or mesenchyme. This mesohyl is the connective tissue of a sponge body and it is supported by the skeletal elements. The skeletal elements of sponges are variable and important in taxonomy.

Many, if not most, of these canals are lined with special flagellated cells called ‘choanocytes’. These choanocytes keep the water flowing through the canals in the correct direction by beating their flagellum. They are also important in trapping food items.

There are three main types of sponges, based on their canal systems: Asconoid, Syconoid and Leuconoid.

The simplest form is Asconoid. Here the canals run straight through the sponge body and all the choanocytes line the central large space called the ‘spongocoel’.

The water enters the ostia, is drawn through to the spongocoel, and leaves through a single large osculum. Asconoid sponges have cylindrical hollow bodies and tend to grow in groups attached to some object or other in relatively shallow seas.

Slightly more complicated are Syconoid sponges. Externally they are fairly similar to asconoid sponges, except that their body wall is thicker. The canals are branched however and do not allow the water to flow straight through in to the spongocoel.

Most modern porifera species are Leuconoid. In leuconoid sponges the canal system is more complicated, again with the canals being longer and more branched. They lead to special chambers whose walls are lined by choanocytes (there are no choanocytes in the canals).

There is no real spongocoel, just a central exit canal leading to the osculum. Leuconoid sponges tend to live in large groups, with each individual sponge having its own osculum. However the borders between individual sponges are often hard to define and the sponge may act more like a large communal organism.

Cell Types of the Porifera

Sponges are built up from relatively few cell types. The main ones being choanocytes, pinacocytes, amoebocytes and lophocytes.

Choanocytes are vase shaped cells with a collar of fine fibrils connected by microvilli. This is a filter which strains out the smallest food items from the water, such as individual bacteria. Extending from the centre of this collar is the single flagellum, whose beating drives the water currents that keep the sponge alive and healthy.

Pinacocytes form much of the epidermis of sponges and are as close as a sponge gets to having a tissue. Generally they cover the exterior and some interior surfaces.

They can change their size (they are contractile) and can therefore change the size of the openings of the ostia, thus controlling the flow of water through the sponge. Pinacocytes are also implicated in the absorption into the sponge of larger food items.

Amoebocytes come in several forms, they are alike in that they are mobile and move around within the sponge body. Archaeocytes are the basis of some asexual reproductive gemmules. If an amoebocyte secretes the spongin fibres of the skeleton, they are called a spongioblast. If it secretes spicules, it is called a scleroblast and if it is star shaped and secrete collagenous fibrils, then it is called a collencyte.

Lophocytes are a type of amoebocyte. They are the most motile of the sponge cells, moving around relatively freely within the mesohyl where they are important in the secretion of fibrils.

Sponges have skeletons. If it were not so, they would be just blobs.

There are two main components of a sponge skeleton: a protein called spongin which forms a tough fibrous network throughout the sponge and normally works in conjunction with the spicules. Spicules are non-living aggregates of a chemical nature, secreted and made from either silica or calcium carbonate as calcite or aragonite.

These spicules are important in the classification of sponges. Thus we can say that:

Individual spicules can be arranged loosely within the spongin or interlocking and fused together. Siliceous spicules come in two sizes called megascleres and microscleres.

Reproduction In The Porifera

All sponges are filter feeders on small to extremely small particles and most are sedentary or immobile as adults, i.e they spend their adult lives fixed to a substrate.

The reproductive ecology of most sponges has never been studied, so it is hard to answer the question “how do sponges reproduce”. The following generalisation is based on the few species that are reasonably well known and should not be taken as the last word in sponge reproductive ecology.

Porifera are generally hermaphroditic, however they are only one gender at a time, being either male or female or neuter.

Some species such as Halichondria moorei change colour when they change sexes, though most do not.

Porifera have no permanent gonads, instead a number of areas of the sponge will, during the reproductive period, become differentiated (changed) to produce either sperm or ova (eggs). Sperm is released into the canals and is then pumped out of the sponge through the osculum, where it is likely to be drawn into the canal system of another sponge.

Here incoming sperm of the same species are trapped by the choanocytes, which then loose their flagellum and collar and migrate through the mesohyl to the ovocyte – a cell generating ova – where the sperm are transferred to the ova (assuming this is a sponge in its female form). Sperm release can be an individual act, as in Verongia archeri, or it can be a co-ordinated affair with many sponges in an area releasing their sperm simultaneously as in Neofibularia nolitangere.

The fertilised ova are retained within the adult sponge, until some unknown signal indicates it is time for their release. They are then set free into the surrounding waters.

Once an adult begins expelling its larvae it continues to do so for some time. Thus Microciona coccinea releases 4 or 5 larvae per minute for 3 to 4 days.

Larval sponges are small, 50 microns to 5 millimetres in diametre. All known sponge larvae are ciliated, though the cilia may be longer, shorter or absent from different parts of their surface. After release, they swim or crawl for a period of time before settling down to begin life as a new miniature sponge.

Swimming species tend to have a crawling phase immediately before settling down. This free living stage may last as long as 18 to 20 days in Polymastia spp., or be as short as 4 to 6 hours in genera such as Ophlitaspongia.

Larval sponges are not complicated organisms and there is much variation between species. However many species have a positive phototaxis when they first leave their parents body, which switches to a negative one before they enter the presettling stage.

Some porifera species have been shown to have a preliminary negative geotaxis, while most species have shown a preference for surfaces with an algal or bacterial film. As with the larval stage, so the time taken for the larvae to reorganise itself into and functioning sponge varies between species. Microciona spp. are up and running within two days, while Polymastia spp. can take as long as 7 days to get themselves sorted.

Sponges also reproduce asexually by releasing fragments of themselves, or special groups of cells called gemmules. These gemmules, at least in freshwater species such as Ephydatia fluviatilis, have a protective coat of spongin and have particular environmental conditions they need to have met before they germinate.

The higher classification of the Porifera is considerably confused by different experts preferring different schemes.

The best I can do is to offer two different schemes, to give you some idea of the problems. Either one is satisfactory for secondary schools and beyond that you should consult your teacher or lecturer – unless you would become a Sponge taxonomist. 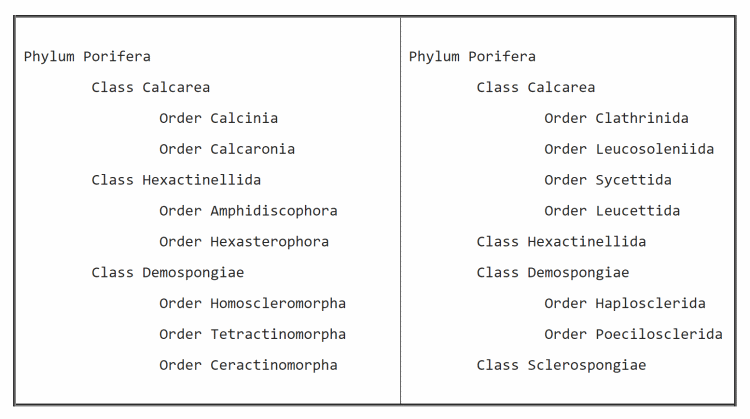 Well, I hope this has been an interesting introduction to the phylum porifera and all the wonders that it contains!

Perhaps now you’d like to learn about the horseshoe worms.