Many snails are edible, nutritious and easy to catch. They also produce shells that are strong, long-lasting as well as being attractively coloured and shaped.  Therefore, it is not surprising that they have been part of our human lives since long before history (the written record) began.  The full story of Man and Snail would be a large and fascinating book.

Escargot, the French for edible snails (includes several species) have been written about as food in Europe since Roman times. However, according to archeological evidence published in 2014, people in Spain were eating snails 30,000 years ago.

Today, according to the magazine Independent, the French eat 25,000 tonnes of snails a year – the equivalent of 700 million individual snails (about 11 snails per person per year).  They also report that France consumes two thirds of the snails eaten in the world.  Meaning human beings consume over 1,000 million snails a year.

Of course this is just terrestrial snails.  Marine snails, commonly called Whelks, Winkles and Abalone in English, are eaten all over the world.  In Cambodia for instance, hawkers walk the streets of every town and city with wheeled trays full of small marine snails and bivalves.

Fresh water snails, known as Khyang in Cambodia for example, are also a common fare in many Asian countries.

Snails are also exceedingly important as food for other animals. In particular fish, especially fresh water fish that we hunt and eat, depend on snails as a part of their diet. Gastropods in all three habitats are also important food items for many of the birds that we love and sometimes eat.  Finally, many small mammals, particularly hedgehogs are happy to munch down on a snail snack.

Snails as a Nuisance or a Danger

Some snails are highly venomous such as the beautiful, but deadly cone snails, see the gastropoda intro page,    However while most people never encounter a live cone shell gastropod molluscs do impinge on our lives in other negative ways.

Every gardener I know curses snails and slugs because of their nightly depredations on our beloved gardens.  As a result of this garden centers around the world stock huge amounts of products designed to kill snails.  Sadly, this often negatively affects birds and small mammals which later eat the dead or dying snails.   Some companies now produce more selective poisons, but generally speaking, poison is not a good idea.

An alcohol baited pit, beer or wine in an old margarine or yogurt pot sunk into the ground will attract and kill numerous slugs and snails.  If rain is likely a cover over the trap, raised off the ground will help the alcohol avoid becoming a diluted.  Another alternative is to provide shelter for the hungry hordes.  This involves laying pieces of wood, flat board and unpainted or treated on the ground around your plants.  Gastropods, especially slugs, will retreat to this cozy recluse as the day comes in, lifting the board you can deal with them as you will.

In some parts of the world, particularly in Californian Orange groves, introduced snails are a major pest.

Snails as Vectors of Disease

About 200 million people are infected world-wide by the five known species of human schistosomes, trematode worm parasites which are transmitted by freshwater snails.  The guilty snails are the genera Bulinus (Schistosoma haematobium in Africa and the Middle East, and S. intercalatum in Central Africa), the genus Biomphalaria (S. mansoni in Africa, Caribbean region and South America), the genus Oncomelania (S. ]aponicum in the Far East) and the genus Tricula (S. mekongi in South East Asia).  These all cause the diseases known as schistosomiasis (or bilharzia or snail fever), which is highly unpleasant and somewhat debilitating though generally not fatal. 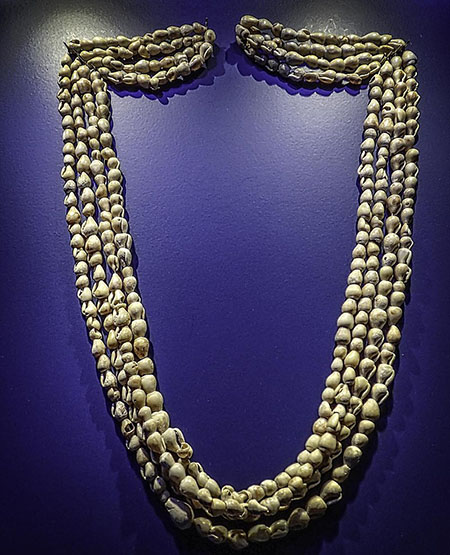 Snail shell necklaces, made from the shells of small marine snails Nassarius gibbosulus, are the oldest know pieces of jewelry made by humans.  In the Skhul cave in Israel archeologists found a necklace assessed to be 110,000 years old.  Other similar artefacts have been unearthed in sites in Morocco and South Africa dated at 80,000 and 75,000 years old respectively. By 50,000 years ago shell jewelry was quite common and even today shell necklaces are made and sold.

According to the book “South and Meso-American Mythology A to Z” the sea snail was considered a symbol of rebirth and joy for Mesoamericans, who believed the whirled shape of its shell represented the circle of life. Pre-Columbian Mesoamerican cultures used conch shells in religious ceremonies and to make jewelry.

Shells, or parts of shell, have been used as money in the Americas, Asia, Africa and Australia. The most familiar form may be the wampum created by the native American peoples of the East Coast of North America.

The sea shell most widely used worldwide as currency was the shell of Cypraea moneta, the money cowry. The shells of species were collected and used as money in various parts of the African coast from Ras Hafun to Mozambique as well as in the Maldive Islands, Sri Lanka, Borneo and on other East Indian islands.  Cowry shell money was an important part of ancient trade networks of the ‘Old World’; i.e., Africa and Asia.

Hélène van Zuylen, a 19th-century French socialite and writer, completed the 1898 Paris–Amsterdam–Paris trail, reportedly becoming the first woman to compete in an international car race. She raced under the pseudonym ‘Snail’.  Her husband, the president of the Automobile Club de France, raced under the name “Escargot.”

Sad news for slow race enthusiasts.  The International Snail Racing Championship – UK, usually held in Congham, near King’s Lynn, in Norfolk UK had to be cancelled in 2020 in order to comply with Covid-19 safety regulations.  However, rest assured they plan to be back and fully operational in 2021.  This will give you plenty of time to get your snail fully fit and in peak condition.

Snails In Literature (A Few Highlights) 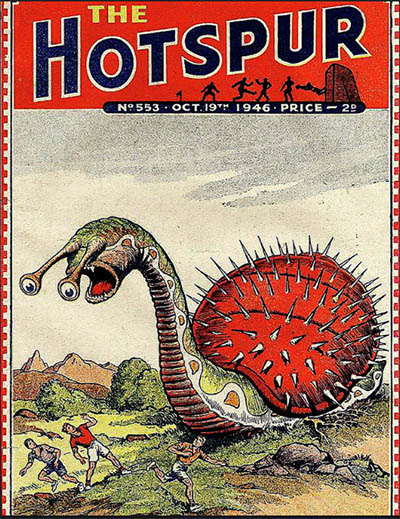 From Shakespeare’s Venus and Adonis:

Or, as the snail, whose tender horns being hit,
Shrinks backward in his shelly cave with pain,
And there, all smother’d up, in shade doth sit,
Long after fearing to creep forth again;

“Will you walk a little faster?” said a whiting to a snail.
“There’s a porpoise close behind us, and he’s treading on my tail.”

You can read the whole poem here.

“The further off from England the nearer is to France—
Then turn not pale, beloved snail, but come and join the dance?”

The British Boys Magazine, The Hotspur, featured a giant and rather carnivorous looking snail on its cover of its 553rd issue, released on October 19th 1946.

Patricia Highsmith, whose novels Strangers on a Train and The Talented Mr. Ripley were adapted into now-famous films, was a well known snail lover. She kept around 300 snails as pets.  She seemed to prefer the company of animals and snails to people, and apparently once took 100 snails in her handbag to a party in order to have someone to talk to. Patricia Highsmith published two short stories about snails in the volume ‘Eleven’; ‘The Snailwatcher’ and ‘The Quest for Blank Claveringi’. 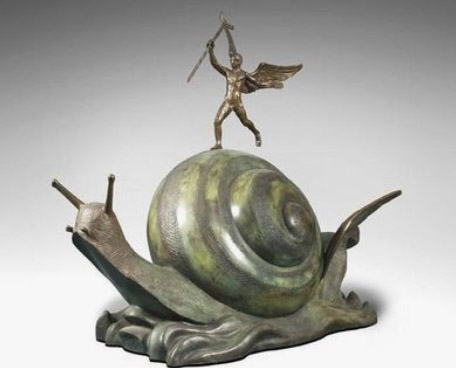 Dali’s Snail and the Angel

In the middle ages, snails were sometimes included in paintings of the Virgin Mary.  Apparently snails in medieval art were considered to be symbols of modesty – because their shells hid their reproductive organs.  In fact they hid them so well, that the artists believed that snails reproduced without having sex.  If only they had known!

But snails appear in art in various places and times; Dali was fond of snails and produced a small bronze called Snail and the Angel.  Later he became a snail in the painting “Salvadore Dali and Gala” by Nikola Gulubovski.

In Sweden, an artist called Stefan Siverud has become rather renowned for painting the shells of living snails – apparently to help people avoid stepping on them

Meanwhile in 2016 a famous Street artist in India, ‘Bandit’, was out and about in the city of Bengaluru sticking paper printouts of snails on the walls of the city.

In 1957 there was a film entitled “The Monster that Challenged the World”.  The monster in this film is supposed to be a giant prehistoric mollusc, though in fact it looks more like a caterpillar with a snail’s shell stuck onto its back. 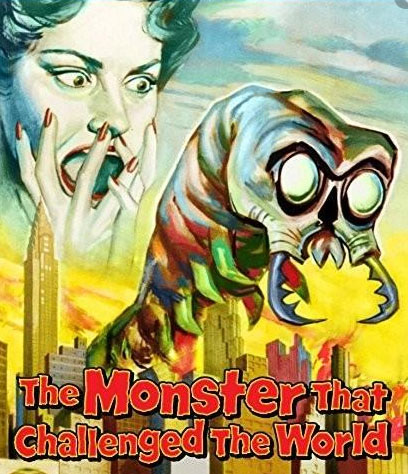 Cinema Poster for The Monster That Challenged The World.

The “Snails” is another Sci-Fi film released in 1966 and set on a distant planet where the snails are … I’m tempted to say amazing.

In 1983 Boris and Arkady Strugatsky published “The Snail on the Slope” (in Russian as they are Russians).  It is a Sci-Fi story set on another planet, though snails are not what it is about. In 2012 Tudor Giurgiu named his cultural film “Of Snails and Men”, though to be honest the snails are not an important feature here either.  The film is a post-Ceaușescu humanity drama set in Romania.

Also in 2012, the Korean documentary “Planet of Snail” about a young blind and deaf man, has even less to do with snails.   More recently “The Quest For The Holey Snail” is a 2016 Sci-Fi book about Time Travel and a now extinct snail with some interesting properties.

Finally no discussion of snails in films would be complete without mentioning the 2103 animated sports-comedy Turbo.  Which really does have a snail in it, even as the main character.  Turbo, the protagonist is a snail who dreams of speed.

In 2002 there was a video game called Snails.  All the characters in the game are cute snails, at least visually cute.  Morally they seemed much more like human beings, as the three clans, or factions (The Moogums, The Lupeez or The Nooginz) constantly fought each other for world domination.