The class Thaliacea contains about 70 species of small, barrel shaped animals that spend their lives swimming slowly through the warmer seas of the world.

They swim as they feed, or visa versa, because – like all the Urochordates – they are filter feeders and they have their inhalant and exhalent siphons at opposite ends of their bodies.

Class Thaliacea is divided into 3 orders:

Like the Tunicates, they feed by drawing a current of water in through their inhalant siphon and out through the exhalent siphon. Between the two siphons, the water passes through the many pore or slats of the enlarged pharynx which occupies most of the body cavity. The water current is driven by beating cilia.

Small particles of plankton are collected on a film of mucous which continuously passes across the pharynx. This mucous is secreted by special cells and is kept moving by the beating of numerous small cilia, until it is swept into the digestive tract.

In the communal Pyrosomes, each zooid (or animal) is arranged within a common test, such that it draws water in from the outside and passes it into the inside or lumen of the communal form. Which, like the individual animals, is also barrel shaped. However, in the communal form, the barrel is only open at one end.

Water driven into the centre – or lumen – of the communal barrel by the individual animals thus has to leave by the open end of the barrel. This constant flow pushes the pyrosome community ever forward through the sea. 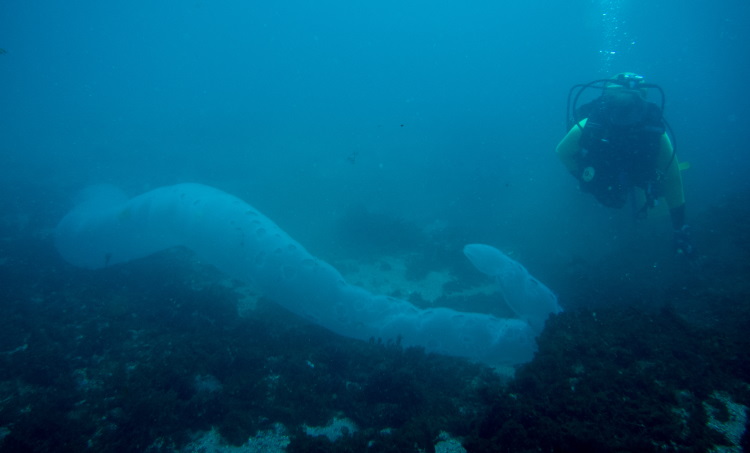 Like all members of the subphylum Urochordata, the Pyrosomes are filter feeders – using a mechanism similar to the tunicates.

Though the individual animals are small, the communal animal can become quite large, up to several metres long.

All the zooids in a given pyrosome colony are hermaphroditic and are therefore called gonozooids. They produce only one egg at a time and this egg is fertilized internally. It develops into a oozoid initially, a short lived asexual form. This in turn give rise to four buds ,which are called ascidiozooids individually, but collectively they form a tetrazooid. 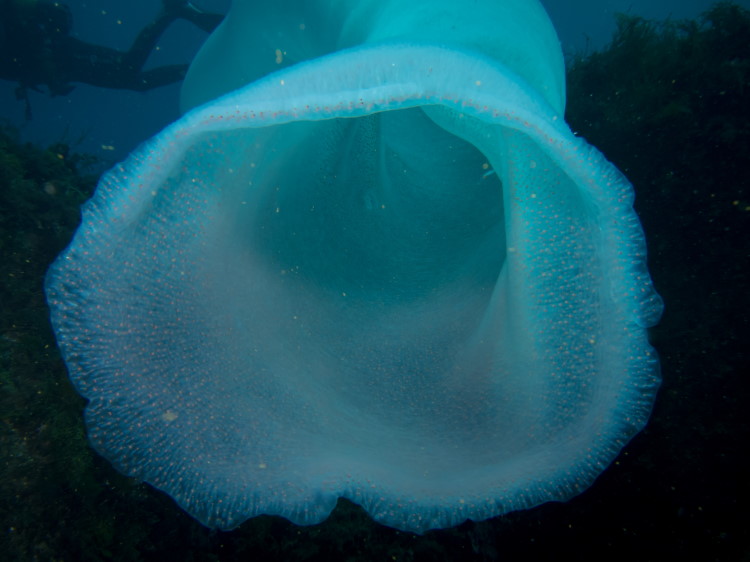 Close up of mouth of giant Pyrosome

This means that after the development of ascidiozooids, the oozoid has changed sufficiently to require a new name and it is now referred to as a tetrazooid. This tetrazooid is released into the water where it develops into a new gonozooid.

This gonozooid then grows into a new colony by asexual budding. This process of development whereby a colony grows by means of asexual budding of its existing members – but new colonies are formed by sexual reproduction of an asexual form, the oozoid in this case – is known as an alternation of generations.

One generation being sexual and the other being asexual.

The non-colonial salps and doliolids also undergo an alternation of generations though the dominant generation (whether it is the sexual or asexual form that the animal spends most of its time as) is different in the two groups.

The Salps range in size from 1.5 to 19 centimetres long and are often quite common in warmer waters. 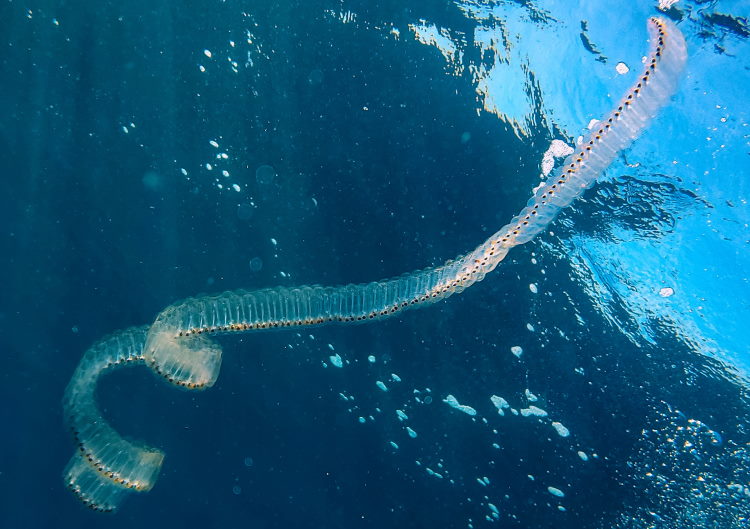 They are normally colourless and live most of their lives as asexual ozooid form. This form naturally has no gonads, but they have a central stolon, along which numerous buds appear. These buds will eventually grow into the sexual gonozooids.

Apart from the possession or absence of gonads, the two forms are basically the same. The developing gonozooids move along the stolon and are eventually released from its free end, however they remain linked to each other and long chains may develop before they break off from the parent oozoid.

These chains may be up to 2.5 metres long.

The individual gonozooids are hermaphroditic and again they produce only a single egg, which when fertilised and released grows into a new oozoid. The oozoid develops and hatches inside its parent gonozoid, meaning that salps are effectively viviporous (animals which give birth to live young) in their sexual generation.

The Doliolids are far smaller than the Salps, being on average only one centimetre long.

However their design and feeding mechanisms are basically the same as the Salps and Tunicates. Their body shape is basically cylindrical but they have a spur arising from the dorsal surface.

Photograph of Doliolid taken on a night dive in Florida

Their reproductive cycle is however quite complicated. The asexual generation are called oozoids and once they have reached a certain size, they give rise to three different sorts of buds which form a temporary colony.

Firstly there are trophozooids, these are specialised zooids whose job is to feed the temporary colony. Once they are developed, the feeding mechanisms of the original oozoid start to degenerate.

The second sort of buds are phorozooids, these are normal Doliolids but they have no gonads and their job is to support precursor gonozooids and to carry them away from the parent oozoid.

The third sort of buds are the gonozooids, but they are not really developed as gonozooids yet. They are sort of like embryo gonozooids, but we call them precursor gonozooids. They will grow into full gonozooids later. These buds are carried from where they develop on the oozoid to the phorozooids by special mobile cells called phorocytes. These phorocytes look a bit like amoebas.

The gonozooids are hermaphroditic, as in the Pyrosomes and Salps. But unlike them, both the eggs and the sperm are released freely into the sea. The eggs are fertilised in the sea and develop into oozoids and so the cycle starts again.

Well we hope you have enjoyed learning a little about the wonders of the class Thaliacea, with its most curious pyrosomes and salps!

Perhaps now you’d like to check out the larvacea.