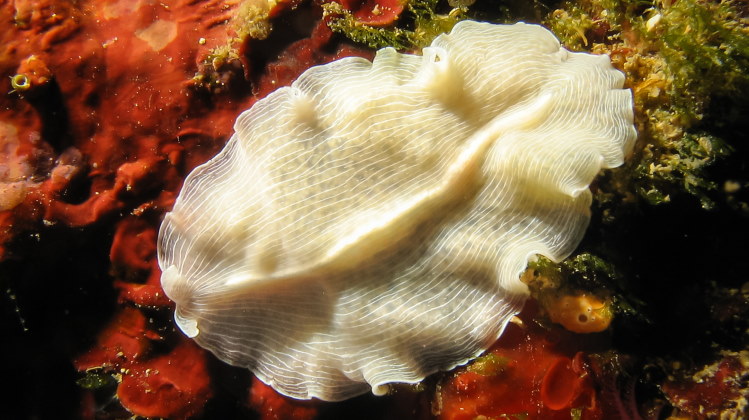 The Turbellaria are free living or commensal with larger animals (though it is possible a few species now thought to be commensal may actually be parasitic).

There are about 3,000 known species of Turbellaria, most of which are marine.

The terrestrial forms include the largest species and the Hammerhead Flatworm (Bipalium kewense) can reach a length of 60cm (2 feet).

The Turbellaria contain all the visually attractive Platyhelminths, including the Hammerhead Flatworm mentioned above which has 7 grey or green stripes along its otherwise yellow body. Among the more attractive species are a number of species of Prosthoceraeus, such as P. vittatus from the English Channel and P. roseus from the Mediterranean.

Other attractive species include Thysarozoon brocchii and the smaller, at 1.3 cm (0.5 in) Oligocladus sanguinolentus. Still very attractive, but small enough that you really need to look at it down a low power microscope, is the 2 mm Monocelis lineata

There are 12 orders within the class Turbellaria and between them they show considerable variability, however they all have certain features in common. These include:

Sexually they are hermaphrodites, meaning each animal is both male and female and that during copulation they exchange sperm. Here I will take a brief look at the more well know orders.

The Acoela are the simplest of the Turbellaria in that they lack intestines and oviducts.

Thus they shed their eggs either through their skin, or out of their mouth.

As adults they live in a sort of symbiosis with flagellated algae of the genus Chlamydomonas. The algae are eaten but not digested, so that they live in the body of the worm. The algae have a safe home and the Acoela absorbs nutrients produced by them. Thus they lose the need to eat at all and can survive without a digestive system.

Before they reproduce, the adults do digest their algal partners and then after reproducing they die. Naturally enough the presence of the algae tends to make them appear green.

As they are dependent on sunlight for their energy and nutrients, they can only live in shallow waters. A common European species of Acoela is Convoluta convoluta.

The Macrostomida are noteworthy for a few reasons.

Firstly they occur in both fresh and marine waters. In fact, one species, Macrostomum appendiculatum can live in either habitat, which is very unusual. Another interesting species is Macrostomum lineare, which will feed on the polyps of freshwater Cnidarians.

When it does so it absorbs the Cnidarians nematocysts (stinging organs) and secretes them in its own skin, so that they can protect it.

M. linare is also one of the species in this group that can reproduce asexually by budding off new individuals from its tail end. Sometimes several buds can form one after the other and you get chains of developing animals still attached to the the adult.

The Polycladida are often attractive and colourful worms mostly limited to benthic (sea floor) marine environments, though a few planktonic (near the sea surface) species are less brightly coloured.

Polycladida are distinguished by their having an extremely branched gut, a complicated set of sexual organs and an eversible pharynx (can be extended out from the body, though normally held within the body). Many species go through a free living larval stage.

Some Polyclads, such as Stylochus zebra live with Hermit Crabs inside their adopted snail shells and are therefore commensals.

Two other species that are well known to mankind are Stylochus pilidium from the Mediterranean and Stylochus frontalis from Florida USA. Both these species are sometimes found as pests in commercial oyster beds.

Tricladida are among the best known and most fully studied of the non-parasitic Platyhelminthes.

They can be found in both marine and freshwater habitats and there are also a few terrestrial species which can be found in damp or very humid soils. Like the Polyclads, some species of Tricladida live with other animals.

In the waters around the USA, Tricladida of the genus Bdelloura can be found clinging to the gills of Horse Shoe Crabs. Scientists are still unsure whether the relationship is a commensal one or a parasitic one.

By far the best known and studied Tricladida are the freshwater Planarians. They are common in many freshwater habitats and can occasionally be found in fish tanks, where they are not much appreciated by fish breeders because they will feed on fish eggs.

Personally I have always found them to be very attractive little animals and have kept them in ceramic basins in my kitchen quite happily – as well as in my fish tanks.

They tend to occupy a variety of habitats, ranging from alpine streams to stagnant ponds. Though you will find different species and/or different forms in the different habitats.

The genus Dugesia is common in both Europe and North America. It can often be caught by searching the undersides of the leaves of aquatic plants, or by tying a small piece of steak to a length of string and lowering it into a pond or slow moving stream until it reaches the bottom.

If Dugesia species are present they will soon be attracted to it and may remain attached to it by their pharynx if you pull the meat in slowly and then dunk it into a jar of clear water.

Freshwater tricladida are best known for their ability to regenerate after being damaged and to survive being mutilated. Some species will survive being cut into 3 parts, with each part growing into a new organism. Others have survived numerous mutilations, such that they grow multiple heads and tails.

Though it is amazing that they can do this, it is without doubt unpleasant for the animal to be chopped up, or mutilated. There is no real reason to let curiosity cause you to degrade your humanity by deliberately causing suffering to another living thing, just so that you can see the results. You can find pictures in text books if you really want to see the evidence with your own eyes.

More amazing yet is the fact that Dugesia dorotocephala, a species of Tricladida which has sufficient eyesight to distinguish between black and white, can be trained to navigate a simple T-maze.

Furthermore, if the trained animal is cut in half, the new animals that develop from both halves remember how to negotiate the maze!

By further research scientists were able to learn that it was RNA (and not DNA) that the animal was using to remember the correct response – it was remembering with its whole body.

See Long-term memory in planarians and its persistence through head regeneration.

The Temnocephalids are perhaps the most advanced group of the Turbellaria in terms of evolution.

All the species in this group are either commensals or parasites. The European species Scutariella didactyla is a parasite on shrimps of the genus Trogocaris. It lives in their gills and sucks the shrimps body fluids out from the gill filaments.

Well, I hope this has been an interesting introduction to the class Turbellaria.

Perhaps now you’d like to learn a little about the Monogenea.