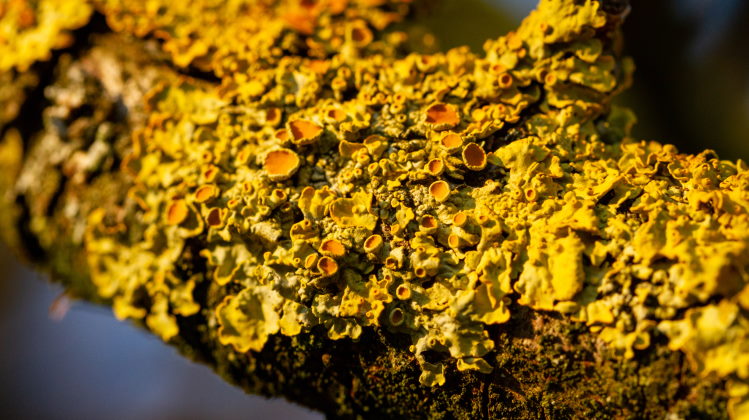 Growth and Development in Lichens

Like all living things, lichens need nutrients and energy to grow.

Nutrients they obtain from the air (including dust), water and some from the substrate they are growing on. Energy they obtain through photosynthesis, which is the role of the algal partner. They can also be incidentally fertilised by bird and insect dung.

Lichens will and do grow on just about everything, natural or manmade. Different species of lichens prefer, or only grow on different substrates. Thus some species will be found on smooth barked trees, some on rough barked and some on only one species of tree.

Also some lichens grow on basic rocks, while others only grow on acidic rocks and some have particular mineral requirements. Thus Acarospora sinopica only grows on rocks with a high iron content. However whereever they grow, lichens grow slowly so what ever it is they are growing on – the ‘substrate’ – needs to have been around for a few years.

Lichens grow differently at different times in their lives. When young and very small they grow slowly, then once they are reasonably well established, they grow much more quickly. Obviously when they are dying, for what ever reason, they grow more slowly again – or not at all.

Lichens grow by extending their thallus outwards, from either its tips or edges. They grow very slowly, some species more slowly than others.

Rates of growth can vary from 0.5mm per year to 500mm per year. Their slow growth rate equates with their long life.

How Long Does A Lichen Live?

The question “How long does a lichen live?” is difficult to answer. The reasons for this are twofold.

Firstly, because they can reproduce vegetatively and because any part of the thallus that becomes detached from the main plant can continue growing as a new part of the same plant (genetically they are the same individual), it is hard to define the limits of an individual lichen.

Secondly, in some cases, when two members of the same species meet they simply merge together to become one plant. Again this make identifying an individual lichen difficult.

Interestingly, not all lichens respond to meeting another member of their species in this way – in some cases they fight for their own individuality. This also occurs between different species and you can often see a mosaic of lichens on a rock – all sharply defined by black lines where their individual borders are demarcated.

In theory then, some lichens are immortal, and some famous Ascomycetes hold to the truth of this theory.

Certainly they can live for a long time and their lives can often be measured in hundreds rather than tens of years.

Lichens live all across the world. In Antarctica they can be found living just below the surface of rocks. In deserts, providing there is a permanent substrate, they can be found surviving the hottest sun. They can also be found in rock pools on the sea shore and on the roofs of our buildings.

However because they depend on their Algal partners to photosynthesise – in order to obtain energy for growth – all lichens need light. There are therefore no subterranean or deep cave dwelling lichens. Generally speaking, lichens like areas where their is plenty of light – such as the exposed surfaces of alpine rocks and the roofs of our houses, etc.

Optimum humidity for growth is between 40% and 70%. However some species can survive for up to 9 months without water. Obviously those that live in rockpools or streams and ponds survive – and even need constant moisture. Lichens have no special water storage organ, however they can trap and hold for a short while a considerable amount of water in their thalli. This can amount to initially 300 times their dry weight.

During their growth, lichens tend to absorb and store metallic ions in their thalli. It is unknown quite why they do this or what benefit they derive from it. However it is known that some lichens can tolerate much higher concentrations of metals than other plants or fungi. They also have a high tolerance for radioactivity and can be the first organisms to colonise, or the longest to survive, in areas of high radioactive contamination.

These include esters and organic acids and are produced, or at least stored, externally to the fungal and algal cells. They occur in a crystalline form.

There are over 350 ‘Lichen Products’ currently known to science, nearly all of which are totally unique to lichens. Exactly what their use is to the lichens remains a mystery, however they are often responsible for giving lichens their attractive colours and may serve to protect the lichen from slugs, snails, psocids and caterpillars, all of which feed on lichens.

They are useful to man in the identification of similar looking species, though it may be that some species produce different ‘Lichen Products’ in different habitats, so their taxonomic use is limited.

That’s why a taxonomic key of lichens is essential.

Well, now you’ve learned a little about lichen growth, perhaps you’d like to know more about lichens and air pollution.