Spore formation is a function of the fungal partner only and the form that the spores occur in reflects the type of fungus involved. As we already know, two main types of fungus are involved – and it will come as no surprise that each can be identified by its manner of spore production.

The most common fungal partners in Lichens are the Ascomycetes.

Ascomycetes are so called because they produce their spores in a bag or ascus. There are 8 ascospores per ascus and any of the fruiting bodies mentioned below will contain numerous asci (which is the plural of ascus).

Just to confuse you, some (about 8,000) Ascomycetes also produce spores not in an ascus, but on the sides of (or at the tips of) special hyphal filaments. These structures are called conidiomata and the spores they produce are called conidiospores. Conidiomata come in different forms, but by far the commonest is the Pycnidium.

The other main group of fungal partners are Basidiomycetes.

Basidiomycetes are relatively rare as lichen partners. One of the ways they differ from Ascomycetes is that they produce their spores on a basidium, a special structure which normally holds four spores at its top.

Spores come in a great variety of sizes, shapes and forms. They are, for instance, much larger in the genus Pertusaria than in the genus Acarospora. Many are simply a single whole spore, while in others the spore may be divided up into 2 or more subsections.

These spores are all microscopic in size and float easily in the air. This enables them to disperse widely when they are released. Quite how these spores meet up with the correct algal partners to form new Lichens is something nobody really understands. Though as most of the algae occur in the wild on their own, it may be that it is simply a matter of chance that some will come to rest on the right algae.

Spore producing bodies come in several forms, 3 of which are relatively common: Apothecia, Perithecia and Pycnidia.

Apothecia normally look like exposed disks, which may be raised above the surface of the thallus, level with it, or sunk below the surface. 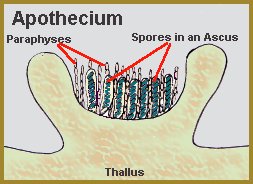 In some genera/species, the apothecia look more like slits, i.e. Graphus sp. The Asci are held within a mass of special sterile hairs called paraphyses.

These paraphyses are composed of fungal hyphae and often have coloured tips. These then give the Apothecia their coloured centres. Differences in the colours of Apothecia can be important in identification. 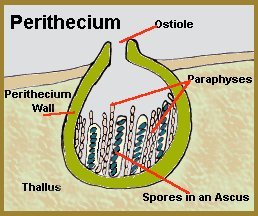 In perithecia, the spore bearing body is not open – as in apothecia – but is in a chamber, with only a small opening to the outside world. This opening is called an ‘ostiole’.

Perithecia are often buried almost completely in the substrate on which the lichen is growing.

Both these structures release ascospores – spores produced within an ascus (a sack). 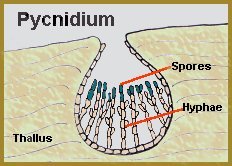 Pycnidia are reproductive bodies which release conidiospores – spores produced from the end or side of special hyphal filaments called conidia.

Lobules are living lobes which grow on the edges of the thallus of foliose lichens. They are flat and break off from the thallus for wind or water distribution.

Isidia are extensions of the surface of the thallus and may be cylindrical, globular, brachiate (branched) or lobula (lobe-like). 20-30% of foliose and fruticose lichens have isidia. Isidia are really very small bits of the top of the thallus.

Soredia are small bundles of algal cells in a fungal hyphae mesh. Unlike Isidia, they do not contain any of the cortex. Instead they are more similar to the medulla portion of the thallus with some algal cells included.

Well, now you’ve learned about the wonders of lichen reproduction in lichen, perhaps you’d like to know about lichen growth.

Otherwise, you can find some beautiful images of how lichens have reproduced to form intricate and complex formations at the University of Michigan or Alberta Lichens.