Home
mammals
Chiroptera: Welcome To The Wonderful World Of Bats
Help us spread the word...
TwitterFacebookPinterest

Chiroptera (Bats) are among the most diverse and successful of all mammals.

Bats are small to medium sized mammals that are instantly recognised because they have wings and can fly. They also have the knee directed backwards as a result of a rotation of the hind-limb.

They give birth to live young and often have complex social lives. Scientific studies, in contradiction to popular belief (which would have you think of them as dirty) have shown that, like all mammals, bats regularly groom themselves and are pretty clean animals.

For some strange reason many people seem to be afraid of bats.

There is no logic to this. Bats are harmless and, despite much bat mythology, are very unlikely to get caught in anybody’s hair.

They can of course bite – and like most animals they will if you mistreat them. But they pose no threat to humans. Even the dreaded vampire bat is only dangerous because of its predisposition to carry diseases. The amount of blood it drinks is less than you might lose from a cut finger.

Most known bat populations have undergone considerable population reductions in the last 50 years. Mostly due to modern agricultural polices and the increased hunting ability supplied by guns. There are many species of endangered bats.

Taxonomically, bats comprise the order Chiroptera (which means ‘hand-winged’) and are divided into two suborders: the Megachiroptera and the Microchiroptera.

Although there was some suggestion in the past that the two suborders may have evolved separately, it is now generally accepted that they are monophyletic – meaning that the all bats arose from a single ancestral lineage.

The Megachiroptera are the old-world fruit bats and blossom bats.

Generally they are larger than the microchiroptera and they can be found in Africa, across Indochina, down through the East Indies and into Australia and the islands north and east of Australia. They do not occur in the Americas.

The Megachiroptera are all included in a single family of about 180 to 190 species. They have elongated faces, especially those that feed on nectar, and large eyes which makes them look a little like foxes. Hence many of them have the common name of Flying Fox.

Most of them are incapable of echolocation and rely on sight and smell to find their way around.

The Microchiropterans are often called the True Bats. 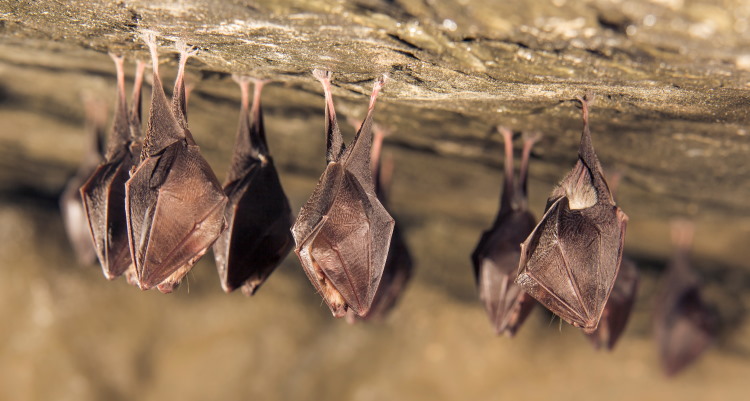 Because wing shape, and therefore wing length, is also function of a bat’s behavioural ecology – as well as a function of its size – body mass is a better indicator of overall size.

However some Flying Foxes in the genus Pteropus can have wingspans of nearly 2 metres, whereas Kitti’s Hognosed Bat, or the Bumble-bee Bat, Craseonycteris thonglongyai, has a wingspan of only 15 to 16 cm.

The Microchiropterans are primarily insectivorous to omnivorous. But there are species that feed on fruit, nectar, smaller vertbrates and even blood.

All the Microchiropterans use echolocation: high frequency sound production and detection, to help them in their navigaton. However the term “Blind as a bat” is highly misleading, as all bats have functional eyes. Many have good eyesight and are able to freely choose between echolocation and visual location.

Although the order Chiroptera is divided into 18 families most bats (95%) are congregated into only six families:

Bats can be found all over the world, except for the tops of mountains and the Arctic and Antarctic. The greatest density of species are found in the tropics however, including all the frugivorous species. Nearly all the bats that live in temperate habitats are insectivorous.

Given the size range and huge number of species in the order Chiroptera, it is little wonder that it is amazingly diverse. With bats showing wide ranges of feeding, roosting, behavioural, social and reproductive strategies.

In some species, it is usual for the females from a large area to congregate in a single cave – or set of caves – in order to give birth and raise their young. 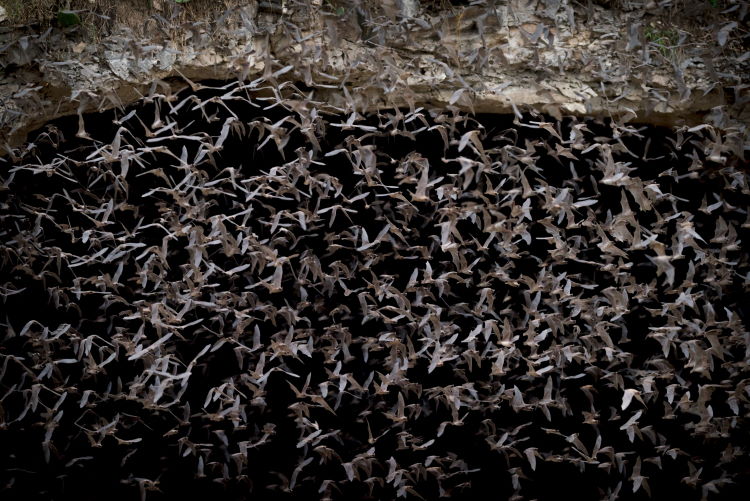 The mass exodus of millions of Mexican-free tailed Bats out of Bracken Cave in Southwest Texas.

These are called nursery roosts and the most famous of these are in Texas USA, where females of the Mexican Free-tailed Bat, Tadarida brasiliensis from as far as 1,000 kilometres away meet every summer. Before the age of DDT and pesticides, it was estimated that 150,000,000 bats used the cave complex.

However the poisons that were used to kill insects also killed the bats that eat the insects, especially their young, and the population crashed to a mere 3,000,000 in the 1960s. Since then it has recovered to some extent, but populations are still very low.

Bats evolved in the early Tertiary era more than 60 milion years ago.

The oldest known fossil is of Icaronycteris index from 53 million years ago (found in Wyoming USA). But this is a fairly modern sort of bat with a functional echolocation system as far as can be told. So bats must have already been around for a while by the time it lived.

Twenty four genera of bats are known from the Eocene, 9 of those from the early Eocene. I. index is related to the modern Microchiroptera, so the evolutionary branch that represents the Megachiropterans must have diverged from this lineage some time before I. index was flying.

It is now believed by scientists that flight in bats evolved before echolocation and that the early bats were omnivores which lived in a tropical environment.

Well, I hope this has been an interesting introduction to the order chiroptera, but there’s still plenty more to learn about these fascinating animals. Use the links below to navigate the bat section of our site: