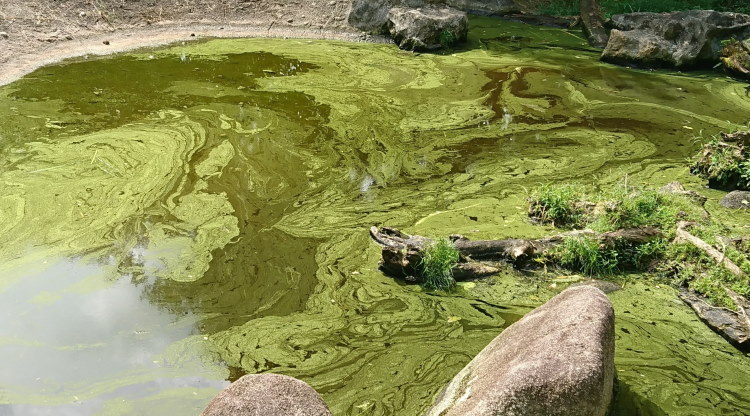 The cyanobacteria are morphologically a heterogeneous mixture of bacteria.

They come in five different types. Firstly they are either unicellular or filamentous.

Unicellular species come in two forms depending on whether they divide by binary fission or multiple fission, the latter tending to be colonial.

The filamentous forms are either branching or non-branching. The non-branching types are again divided into two groups, depending on the presence or absence of special nitrogen fixing heterocysts.

Cyanobacteria are photosynthetic organisms. Like plants, they trap the energy of the sun (autotrophically) to use in their own metabolism and give off oxygen in the process. In order to achieve this they have their own chlorophyll called ‘Chlorophyll a’.

Cyanobacteria can be found in many habitats: soil, on rocks, in fresh water and salt water.

They can also be found in the desert where they remain dormant for most of the time, taking advantage of the occasional rains.

In aquatic environments they often form thick mats. Like many bacteria they have a higher tolerance of heat and low pH values than green plants, so they are often the main autotrophs in hot springs.

In many aquatic environments cyanobacteria are the most important primary producers.

They contain chlorophyll and trap energy from the sun in the form of light.

In the depths of the sea – miles below the surface, where there is no light – bacteria can still be the primary producers. Only here they derive their energy from oxidising, or reducing, naturally occurring sulphur compounds.

In certain places in the ocean are upwellings of warm, minerally-enriched water called Hydrothermal Vents. They occur where the earth’s crust is spreading.

Around these vents live strange communities of organisms, including giant Pogonophoran worms, giant clams and various other invertebrates.

As no light ever reaches these areas, all the energy for life comes from the heat and mineral content of the water. The first step in this process are the bacteria, either ‘free living’ or living as partners (symbiotically) with the worms and clams.

A number of cyanobacteria have formed these symbioses with other organisms – including liverworts, ferns and cycads.

However, their best known symbiosis is with various fungi, to form numerous lichens.

Cyanobacteria were probably the first organisms on earth to release oxygen into the atmosphere.

In this way they would have played a major role in making the planet suitable for animals like ourselves.