In optimal conditions, they can reach maturity in 20 minutes.

They can then reproduce… and one becomes two.

The numbers just keep doubling every twenty minutes and they get horrendously large. Yes, ‘binary fission’ is scary!

My old bacteriology teacher assures me that in 48 hours the total weight of all the bacterial offspring of just this one bacterium would weigh 400 times the weight of the planet earth!

If this seems unbelievable, experiment with the maths.

The power of doubling is incredible. In 45 hours the bacteria would only weigh 78% of the earths weight. But a mere three hours later, they would out weigh it 400 times.

Fortunately for us, bacteria never actually end up in a perfect soup. In real life, a cell normally takes between 1 and 24 hours to reach maturity. In extreme conditions where there is very little food, or low temperatures it can take much longer still – which is good for us.

Also, many things eat bacteria or cause them to die. Which is why we aren’t swimming around in that soup of bacteria. Still, it is worth remembering how quickly one bacteria can become many when it finds something it likes to eat.

The simplest form of bacterial reproduction is called binary fission.

Basically, binary fission is where a bacterium grows to about twice the size of the smallest bacterium and splits in two.

Process of binary fission in amoeba

There is a little more to it than that though. First, the DNA in the cell makes a copy of itself. Then the two copies separate in the cell and the cell grows two new cell membranes (and two new cell walls) through its middle – effectively cutting the cell in half, to make two cells.

Binary fission is asexual (the ‘a’ in front meaning without) reproduction, because both the daughter cells have exactly the same DNA as the original cell and only one cell is involved.

With this sort of reproduction you can start a population with just one bacterium.

Sexual reproduction – like that used by most animals and plants – involves at lease two individuals and normally these are called males and females. Bacteria are not quite the same as the higher animals, but they do transfer DNA from one individual to another… and they can have a sort of sex.

Some methods of DNA transfer between cells seem almost accidental.

When one bacterial cell dies and its cell wall is ruptured, the contents are released into the environment. This includes the DNA, which may be complete or broken into bits.

Other nearby bacterial cells can absorb this DNA and add it to their own – and in this way they gain extra DNA. If the dead cell’s DNA codes for a property they do not have, then they have gained this property.

Viruses which attack bacterial cells can also be the agents of the transfer DNA from one cell to another.

Many bacteria can also contain smaller sections of DNA in the form of Plasmids.

Plasmids are small circles of DNA and they can replicate themselves within a bacterial cell. They often give the host cell extra abilities, such as resistance to antibiotics or the ability to make a useful enzymes.

Some plasmids give the bacterial cells that possess them a sort of masculinity. They cause the cell to grow special sex pili, which reach out from the cell and attach to other cells that they contact.

They then pull the two cells together. Once their cell walls are touching, these plasmids reproduce copies of themselves into the other cell.

In doing so, they give the other cell the ability to generate sex pili – effectively making the second cell male as well.

Sometimes, this plasmid DNA can become joined up with – or incorporated into – the normal bacterial cell DNA. Then the whole cell DNA is replicated into the other cell. This is called conjugation and it is as close to what we think of as ‘sex’ as bacteria get.

Plasmids can also move to new bacterial cells when a cell dies, the same as ordinary cell DNA can.

We get our energy from the food we eat – in other words from organic matter. All other animals are the same.

Plants and some of the Protista get their energy from the sun.

Various species of bacteria do both these things.

When an organism gets its energy from the sun, we call it a Phototroph

This is from the Greek works ‘photo’ for light and ‘troph’ meaning to feed. Literally this means ‘light eating’.

Organisms which do not get their energy from the sun get it from the energy already stored in chemicals.

These organisms are called Chemotrophs.

Which means ‘chemical eating’. Most bacteria and Protists, as well as all animals and fungi, are chemotrophs. 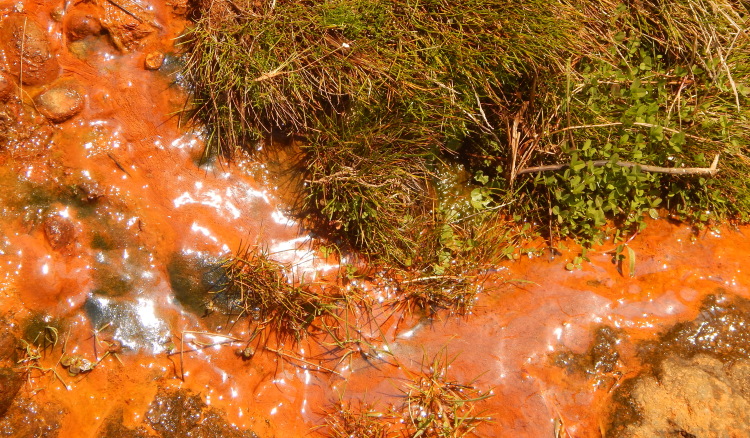 If the food chemicals are large, complicated molecules of organic origin (i.e., they were once organisms), then we call the bacteria and all the other animals that eat them ‘Chemoorganotrophs’.

But if the molecules are small and inorganic (i.e., iron, sulphur, hydrogen sulphide, etc.) we call the bacteria that eat them ‘Chemolithotrophs’.

Only bacteria are chemolithotrophs. Whereas animals, fungi and many protozoa are all chemoorganotrophs.

Chemolithotrophic bacteria are unique in our world… and because they require special adaptations to gain their energy, they are quite different to the more common chemoorganotrophic bacteria.

Some Long Words to Remember…

Don’t forget those, you never know when they’ll come in useful!

Bacteria are important in soil formation.

Not only through the breakdown of organic matter in already easily recognisable soils, but also in the conversion of rock to soil. Any organic matter, however small a particle, is attractive to bacteria.

The bacteria which live by degrading organic compounds are called Chemooganotrophs.

The carbon dioxide produced during respiration by chemoorganotrophic bacteria is converted to carbonic acid, which is an important agent in the break down of rocks.

You may be interested to know how bacteria eat.

Like all living organisms, bacteria need to eat in order to live, grow and reproduce.

However, bacteria are far too small to have a mouth. Instead they have special channels in their cell walls and cell membranes which allow (or even assist) some molecules to cross.

Once the molecules are inside the cell, they can be broken down into their component parts. Before then being rebuilt into the macromolecules the bacteria needs in order to build and repair itself, or generate energy.

Unfortunately for the bacteria, the surrounding environment is not always full of free-floating molecules of the correct sort.

Instead, the molecules may be all bound together in tissues such as a dead leaf, or you (or me)… or even our half digested dinner in our intestines.

To solve this problem, bacteria have evolved the habit of leaking enzymes out into the environment around them.

These enzymes then do what ever it is they do: attack specific tissues and molecules (proteases attack proteins, cellulases attack cellulose, etc.) and break them up into smaller units.

Eventually, molecules of a size that the bacterium can take into itself are made – and that the cell can then absorb through the channels mentioned above.

Well I hope this article has given you a good overview of the processes like binary fission that enable bacteria to reproduce and how bacteria eat and produce energy.

Perhaps now you’d like to know a bit more about how bacteria cause disease?