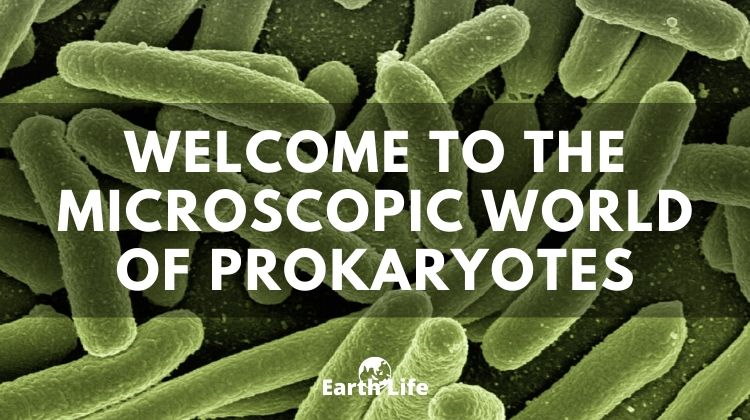 The Microscopic World of the Prokaryotes

The smallest and most diverse group of organisms living on this planet.

Prokaryotes are the original inhabitants of this planet.

The first successful living organisms may have looked very like some of today’s Archaea.

Both Archaea and Bacteria evolved somewhere between 3 or 4 billion years ago, as far as we are able to tell from the fossil record. This means they have been around twice as long as the Protozoans and more than 3 times as long as animals.

Prokaryotes are the toughest of the tough when it come to living things.

They hold all the records for living in the coldest, hottest, most acidic and most highly pressurized environments.

They live in incredible places such as miles beneath the earth in bare rock, under glaciers, floating around in clouds and miles down on the sea floor – and even at temperatures greater than 100 C.

They are also the worlds experts at surviving bad times.

In 2000AD scientists at West Chester University Pennsylvania succeeded in waking up the resting spores of a bacterium (Bacillus permians) that was last active 250 million years ago. The question this caused scientists to ask was. “Is it possible some Bacteria may be immorta ?”

Prokaryotes make up most of what is studied by microbiologists, the rest being some single celled fungi and algae.

Microbiology is a very important field of research these days. Contributing greatly to our studies of medicine, bioengineering, genetics and evolution.

Prokaryotes are single celled organisms that do not have a nucleus, mitochondria or any other membrane bound organelles.

In other words, neither their DNA nor any of their other sites of metabolic activity are collected together in a discrete membrane enclosed area.

Instead everything is openly accessible within the cell. Some free floating, some bound to the walls of the cell membrane. It is this lack of membrane-bound organelles which separates them from the Eukaryotes.

Some bacteria have internal membranes, invaginations of the cell membrane as sites of metabolic activity, however these membranes do not enclose a separate area of the cytoplasm.

Both of these are a Kingdom of life in their own rite. This is because they are as different, if not more different, from each other, than they are from protozoans, fungi, plants and us.

At the bottom of this page is a table listing most of the major differences between Archaea, Bacteria and Eukaryotes.

Nitrogen is an essential component of all protein and DNA molecules.

However gaseous nitrogen, N2, cannot be used by most organisms. So even though there is plenty of nitrogen in the atmosphere, often very little of it is available for living things to use to grow.

To build new proteins, etc., most organisms make use of nitrogen that is already part of a larger molecule, i.e. a dead plant or animal or animal waste product.

Gaseous nitrogen is free nitrogen. So far as we know, only prokaryotes, human chemists and the occasional blast of lightening can split the two atoms of nitrogen in gaseous nitrogen… and cause them to be combined with one or more carbon or oxygen atoms.

When a nitrogen atom is included in a molecule comprising other elements it is referred to as ‘fixed’ and organisms which can take gaseous nitrogen and incorporate it into such molecules are called ‘nitrogen-fixers’.

Nitrogen fixing organisms are very important to the balance of life on earth. Without them Eukaryotes (Animals, Fungi and Plants) would not be able to live and grow.

A Note on Measurement and its Terminology

All measurements made in the microscopic world are based on the metre, this is because the metre is the basic unit of all scientific measurements of length. If you are still thinking in imperial term (inches, feet and yards) a metre is about 39 inches or just over 1 yard.

Table of Differences between Archaea, Bacteria and Eukaryotes

Want to learn more about the prokaryotes? Check out the following pages