Home
Types of Pollution 101: Thinking about the greatest problem on earth

What is pollution? It is a simple question, one that everyone believes they can answer, however most answers raise many questions.  Like all things in our life the questions of:- What constitutes pollution?; What is a pollutant?; and What can be polluted? are worthy of a considerable amount of thought.  Various online dictionaries, and the National Geographic, define pollution something like this.

Pollution is the introduction of harmful materials into the environment.

For a basic beginning this is a good definition. National Geographic upholds the idea that pollution can be natural, and I would agree. The example they give is volcanic ash. From our definition this remains true, but it opens a Pandora’s box of questions.

Questions of scale, degree and quantity can make many simple statements look foolish.

Once we start to think about the question of what constitutes pollution in the light of the above definition we immediately come across other questions.

Does a just few square meters of volcanic ash that kills of few plants and some small animals before it is dissolved into the soil by the rain a day later constitute pollution? What about ten square meters, a hundred, a thousand?  How deep does the ash have to be, 1mm, 1cm 10 cms or 50 cms? 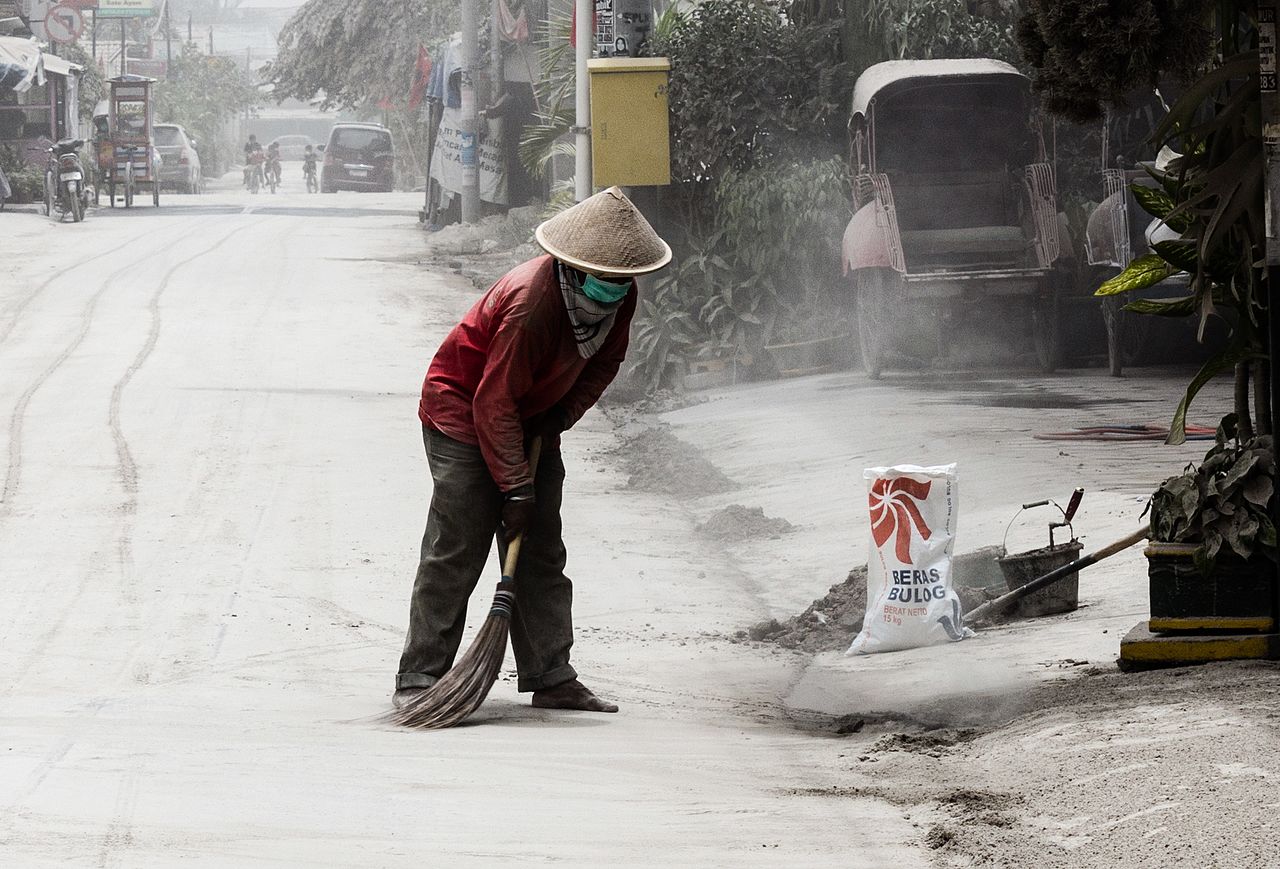 A man sweeping up ash volcanic ash in Yogyakarta; Indonesaia, during the 2014 eruption of Kelud.

If volcanic ash is a pollutant, because it kills off everything it covers, what about a fresh cow pat?  While plants later grow through it, and animals live and feed on and in it, especially as it gets older and loses its ammonia, at the moment of deposition it kills off both the plants and many of the small animals it lands on.

By our definition the answer must appear to be yes.

Lets get a little more outside the box.

When a grasshopper swarm roams across the land, introducing itself to new parts of the environment and devouring everything in its path, is this pollution?

When a human being makes an axe or gun, objects which are destined to hurt various parts of the environment, is this pollution?

What about mudslides or major long lasting flooding?

What about tsunamis introducing salt water into a fresh water pools and streams and killing off everything in them?

Finally what about the methane produced by most animals and ultraviolet radiation from the sun?

Our Definition of Pollution Is In Trouble

I hope you can see now that out definition of pollution is in a little trouble.  Definitions running into trouble when they are scrutinized is something scientists and philosophers are very familiar with.  It is a good sign really.

It is not a reason to stop scrutinizing, but a demand that we accept the limitations of words and the fuzzy interconnectedness of reality. Also it often requires us to rephrase our definitions and our mental maps of the world.

From the perspective of a collembolan living at the soil surface in a field somewhere the sudden occurrence of a lethal mass of cow dung from the heavens above might well be called pollution.  However we know this is not really what we mean when we use the word. 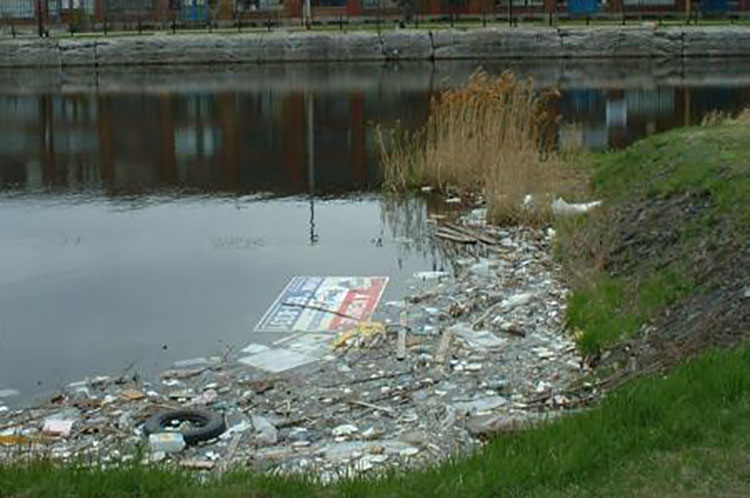 Water pollution in a canal in Montreal USA.

So… What Is Pollution Again?

Pollution is the introduction into the environment of substances that cause large scale, or long lasting harm because of their quantity, immediate toxicity or lack of biodegradability.

By this definition all nonbiodegradable products produced by human beings would constitute pollution if they are released into the environment.  It would also include things like oil spills, which, while biodegradable in the long term, cause massive destruction in the short term. It would also include all forms of plastic which do not degrade. Meaning those which break down into smaller and smaller particles creating the microplastic flux currently increasing all around the world..

Further more by this definition a single cow pat would not constitute pollution because it is neither large scale nor long lasting. However flushing the toilet wastes from a city of a ten thousand people into a nearby lake every day definitely would qualify as pollution. 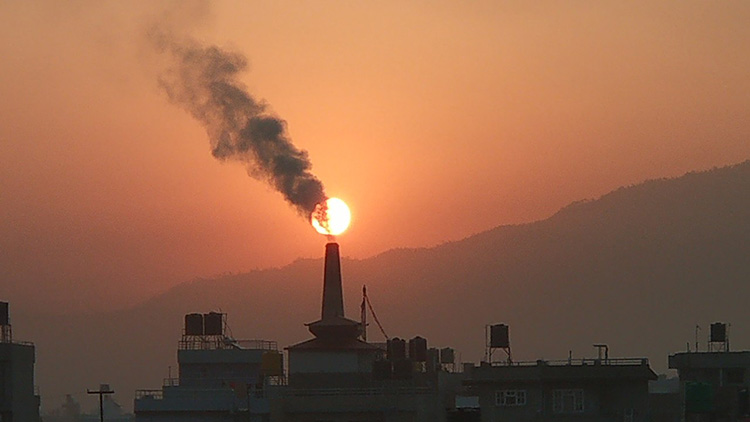 Air pollution over a brick factory in Nepal.

It should be fairly obvious that not all pollutants affect all the environment.  An oil spill off the coast of Mauritius in August 2020 does not have much effect on the coastal environment of Sweden, let alone the Russian Steppes or the Andes.  So when we use the word ‘environment’ in our definition we know we are talking about some aspect of, not necessarily the whole of, the environment. We define types of pollution according to which aspects of our environment they affect.

The three most commonly recognized types of pollution are:-

Pollution that has been released into the air, and which therefore constitutes air pollution, can become a part of water or soil pollution when gravity, wind or rain drives the particles of pollutant matter down onto the surface of the planet. 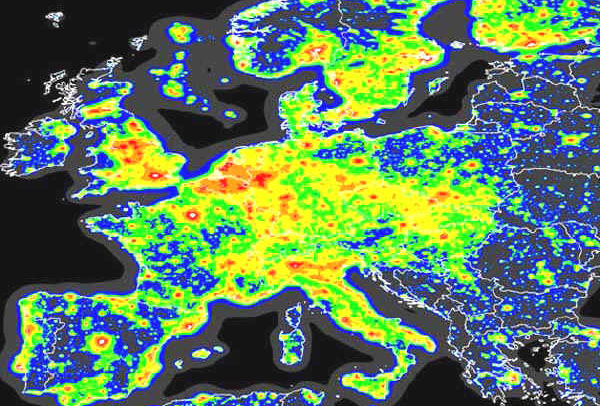 Two other less well known, but still discussed types of pollution are:-

I was lucky enough to have been brought up in a countryside area with minimal light pollution and one of the things I miss from my childhood is the awesome beauty of the night sky.  In modern cities this simply isn’t visible.

Light pollution, like all forms of pollution also has effects on wildlife.  Animals and plants that live in urban and suburban areas are usually deprived of the dark nights they have evolved over millennia to live with.  This can result in the feeding and sleeping patterns of both nocturnal and diurnal wild animals being disrupted. 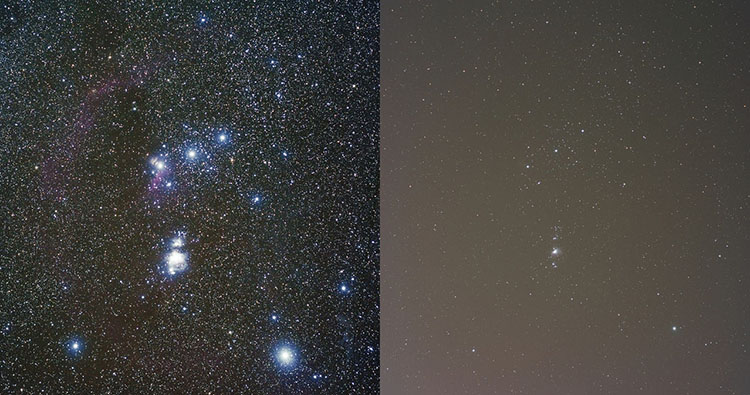 The night sky from city and country locations in Utah USA.

Some of the consequences for wildlife arising from light pollution are:-

Other animals affected by light pollution include bats, nocturnal mammals and zooplankton in lakes and artificial reservoirs.

The dark-sky movement is an international collection of people who campaign to reduce light pollution.

Noise pollution has been named “the silent killer” in some publications.  Noise pollution is another very modern aspect of human technological growth.  While still little recognized by the general public it has been a cause of concern to scientists for some time.

According to the scientific publication “Noise Pollution: the silent killer of the century.“ Chaudhary and Chaudhary, June 2020, noise pollution has adverse effects on human health from  before birth until old age. The long term health hazards accruing from exposure to excess noise include: induced hearing loss, sleep disturbances, cardiovascular disease and stress. 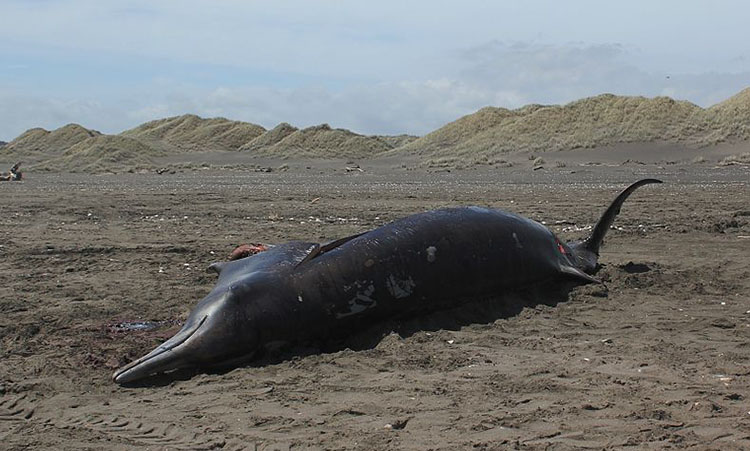 As widespread, unpleasant and under-documented as the effects noise pollution are on ourselves, the effects on wildlife are most probably as, if not more, serious and definitely less well studied.

Ninety percent of mass strandings of beaked whales that have occurred since the end of the19th century (when records started being collected)  took place after 1950.  Modern shipping, ocean mapping and modern marine oil mining and prospecting all flood the oceans with noise.  Animals that use sound as their primary means of communication and even perception are particularly vulnerable to negative effects from noise pollution.

The autopsy of whales stranded in the Canary Islands in September 2002 revealed considerable damage to their auditory and other internal organs.  Later it was shown that this stranding occurred during an international military exercise which released a huge amount of engine and sonar noise into the environment.  This was the beginning of the scientific realization that noise pollution in the oceans has serious negative effects on marine life.

The amount of noise pollution in the oceans has doubled every decade since recording began.  Modern studies suggest that marine noise pollution can reduce the ability of whales to effectively communicate by up to 60%.

Recent studies suggest that noise pollution can harm whales directly by damaging their hearing, and in extreme cases, causing internal bleeding and death. More commonly, it appears that excessive or prolonged noise can cause behavioral changes that interfere with the health and survival of the animals.

“Sound travels faster and farther in water than in air. Over evolutionary time, many marine organisms have come to rely on sound production, transmission, and reception for key aspects of their lives. These important behaviors are threatened by an increasing cacophony in the marine environment as human-produced sounds have become louder and more prevalent.

Existing evidence shows that anthrophony, (sounds generated by human activities), affects marine animals at multiple levels, including their behavior, physiology, and, in extreme cases, survival. This should prompt management actions to deploy existing solutions to reduce noise levels in the ocean, thereby allowing marine animals to reestablish their use of ocean sound as a central ecological trait in a healthy ocean.” 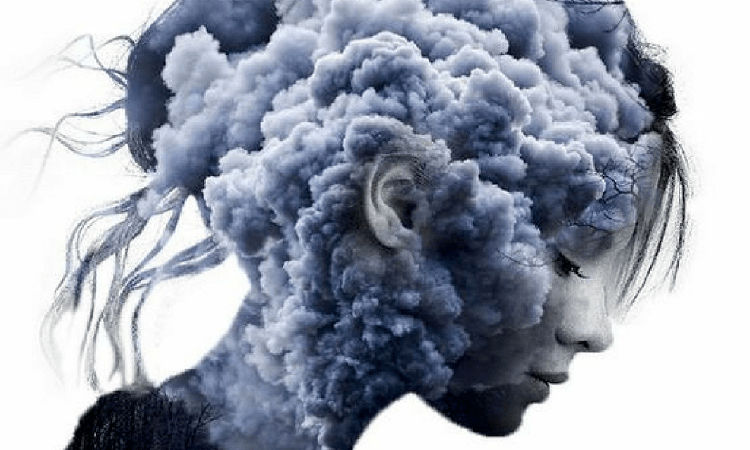 Mind pollution is the source of all pollution.

What Is Pollution – Final Thoughts

Pollution is anything, which, when introduced into an environment, reduces the quality and functionality of that environment.

I say this because all our actions both as individuals and as a society arise out of our internal environment.  All the pollution that humanity so casually creates in the physical world is the result of inner world pollution.  Pollution that creates minds and souls as degraded and dysfunctional as the most obscenely polluted physical environment.

How you define types of non-physical pollution will depend on your current mindset.  Achieving any sort of objective consensuality on how to define, and even on what constitutes non-physical pollution is likely impossible.   I am not claiming to be an expert in anything so I would like you to read the following as a set of possibilities.  Possibilities that you will think about, argue with and probably improve on, within the confines of your own mind. That said here are a few suggestions for non-physical pollution.

Well that has brought us to the end of this brief introduction to the concept of pollution.  If you would like to delve more deeply into the specifics of different types of pollution why not start with Earthlife’s report on Microplastics.