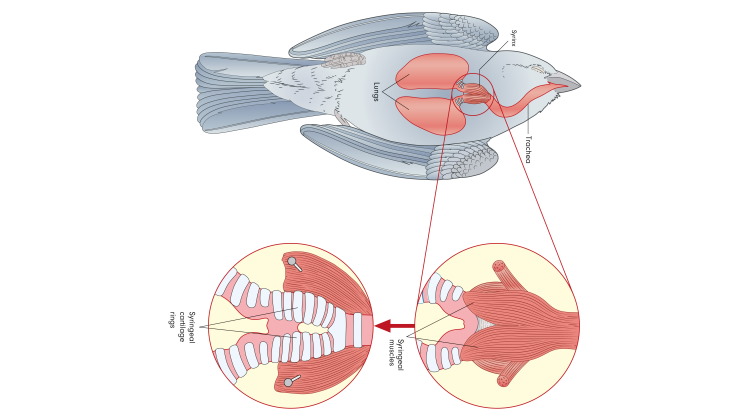 The Respiratory System and Breathing in Birds

Like us, birds need to breathe air in and out of their lungs.

This is in order to fulfil the cycle of bringing oxygen into the body – to be used in metabolism – and also to take the waste CO2 away from the body.

However, unlike us, when a bird breathes – the air does not go simply in and out of the lungs in a simple “U-shaped” path. Instead birds’ have a number of large extensions called ‘air sacs’ and hollow (pneumatized) bones, all interconnected to their lungs.

These allow the air to flow around in a grand circle, meaning birds can have fresh, oxygen-rich air in their lungs all the time.

Also, unlike us mammals, a bird’s breathing is not driven into and out of the lungs by means of a diaphragm. In birds, breathing is controlled by muscular contractions of the ribcage, which reduce or increase the overall size of the body cavity and thus force air out of the various air sacs.

Air is breathed in through two nostrils, situated at the base of the bill (except in Kiwis where they are at the tip of the bill and gannets – where nostrils have become redundant and breathing is through the mouth).

This air enters the ‘trachea’, then passes down the throat until it reaches the syrinx (a bird’s vocal chords). Here the trachea divides into two ‘bronchi’, before passing through the bird’s lungs. This freshly inhaled air goes first, not to the lungs, but to the abdominal air sacs. These are the largest and most important of a bird’s air sacs.

Some of this inhaled air goes to the posterior air sacs also.

Thus it takes two breaths – and not one – for air to pass in and out of a bird’s respiratory system.

Also important to note is the fact that air passes right through the bird’s lungs. This allows for an almost continuous flow of air over the ‘alveoli’ and for a greater exchange rate in gases.

This exchange rate is also enhanced by the fact that bird alveoli are 10 to 100 times smaller than ours, giving a far greater surface area per volume for gaseous exchange to take place.