Home
birds
Cuckoos & Hoatzin: The Wonders Of The Cuculiformes
Help us spread the word...
TwitterFacebookPinterest

The Cuculiformes is a medium sized order, comprising 143 species in 6 families and 30 genera.

Many of which are brood parasites and thus fit the classical image of a cuckoo.

Besides cuckoos, members of this family are known as Anis, Couas, Coucals, Malkohas and Roadrunners.

They are a diverse family, found in many habitats from open moorland through savannah and desert to tropical rainforest.

Most Cuckoos are carnivores, with many feeding on hairy and distasteful (to other birds) caterpillars – though others feed on a variety of insects, lizards, small snakes and mammals. The exceptions to this rule is the Channel-billed Cuckoo (Scythrops novaehollandiae) and the Koel (Eudynamis scolopacea) which feeds mostly on fruits. 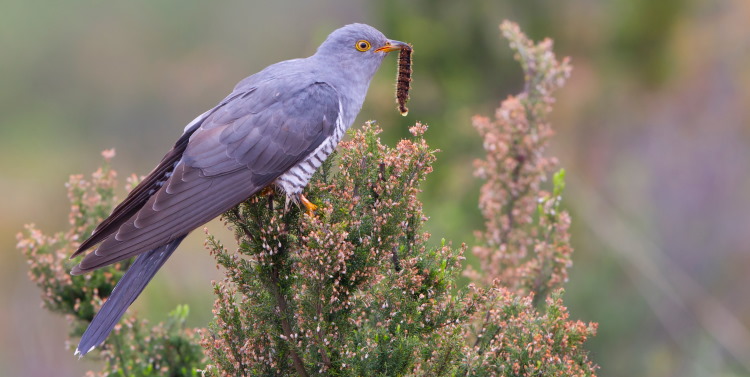 Many cuckoos are relatively dull coloured birds with various forms of mottling, i.e. stripes and spots. Some however, such as those in the genera Chrysococcyx and Cerococcyx, have bright colourful glossy plumage. The best example is the Emerald Cuckoo Chrysococcyx cupreus from Africa which is green and gold.

Many parasitic cuckoos are mimics of either the species they parasitise, or of hawks.

The Koel which is a parasite on the House Crow (Corvus splendens) and the Drongo Cuckoo (Surniculus lugubris) which parasitises the Black Drongo (Dicrurus macrocercus) are mimics of their hosts. 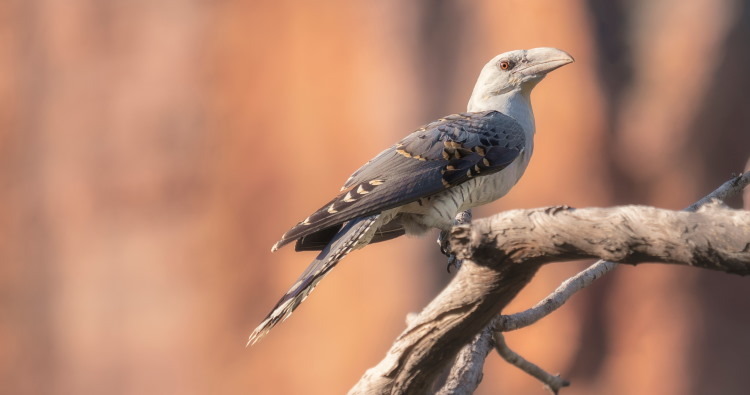 Many Cuckoos, particularly the parasitic ones, are shy retiring birds not often seen.

There is great diversity of nesting habits within the Cuculiformes – perhaps greater than in any other order.

The cuculidae are the traditional Cuckoos, exemplified by in the European Cuckoo (Culculus canorus). C. canorus spends the cold European winter in Africa and migrates to Europe in the spring to breed – quite why I have no idea. Males set up vague territories which will overlap with one or more female territories.

C. canorus is an obligate brood parasite, meaning the females build no nest of their own and they can only reproduce by laying their eggs in the nest of other birds.

This is the meaning of ‘Cuckoo’. 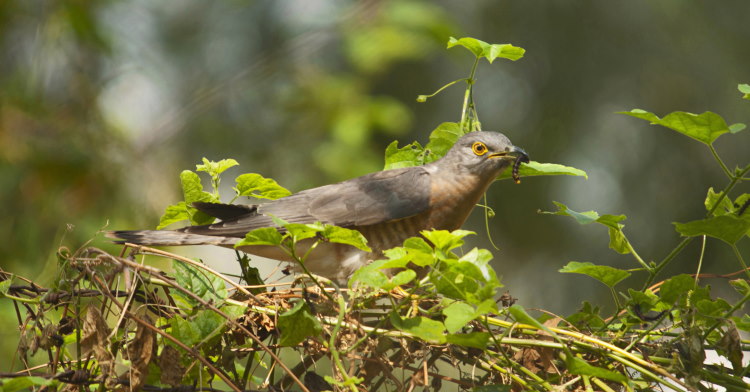 C. canorus comes in a number of different races, each of which is distinguished by the species of bird it predominately uses as its host. Each race has evolved egg mimicry, so that the eggs it lays look like the eggs of its host.

This would only be possible if there was host fidelity within a breeding lineage – and Cuckoos normally parasitise nests of the same species as they were raised by.

In C. canorus – and other species which specialise in smaller species of birds – the egg is smaller than would be expected. Thus it is nearer the size of the host’s egg and therefore unlikely to be noticed by the host as different.

The eggs start developing while still inside the female bird, which gives them a head start and allows them to hatch before any of the host female’s natural eggs. The young cuckoo is then in a position to evict these young from the nest as they hatch, ensuring that it is the only one fed by the hard working parents.

There are about 28 of them and they are mostly New world species, living in tropical Central and South America – but some are found in South-east Asia and Africa.

Though many of them look similar to the traditional Cuckoo, their breeding habits are quite different. The nest is a flimsy platform of twigs and leaves. The 3 or 4 pale blue or green eggs are incubated by – and the young fed by – both partners.

The young leave the nest when only a week or so old, though they cannot fly for another two weeks. Interestingly, occasionally – especially in years of plentiful food – species of Coccyzus will lay eggs in the nests of other birds, as well as in their own.

This occurrence is not common, and the list of species used is small – about 12.

However it offers a fascinating insight into a possible course for the evolution of nest parasitism.

The Couas are a single genus of birds confined to Madagascar. They are all non-migratory. Three species are primarily arborea, while the other 6 or 7 are predominantly cursorial. They are mainly solitary only forming pairs in the breeding season.

Their nests are simple. Little is known about their lifestyles.

The Greater Road Runner Geococcyx californianus, is the best known and most famous of the group. 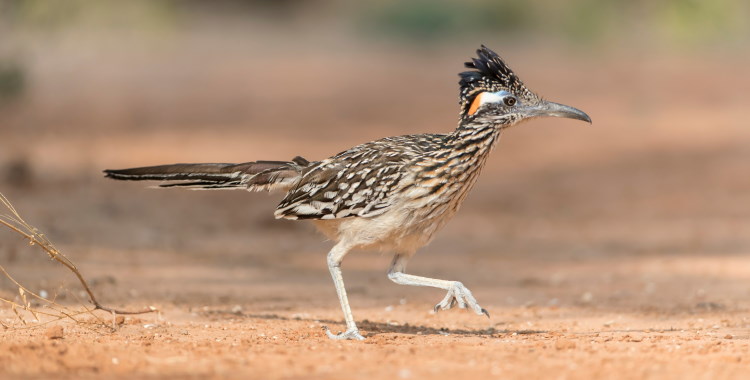 They feed on insects, scorpions, lizards, snakes, and other birds. They build their nests in low trees, or clumps of cactus, and the male bird usually incubates the 2-7 whitish eggs. They lay twice in a year, once in April and again in late July.

The 30 species of Coucals are all contained within a single genus (Centropus).

Anatomically they are recognised because they have a straight hind claw, resulting in their sometimes being referred to as Lark-heeled Cuckoos. 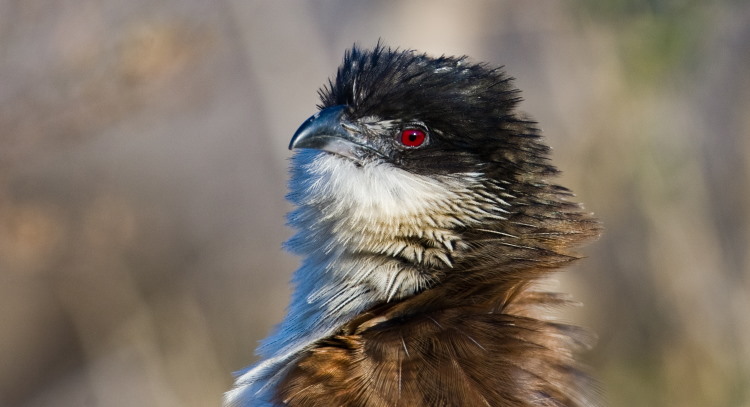 They feed mainly on the ground on large insects and small vertebrates. Their nest is a large globular structure built near the ground, 2-4 white eggs are laid and both partners take part in the incubation of the eggs and the feeding of the young.

The Anis are from South America and represent a completely oppressive breeding system to the traditional cuckoo.

All members of the colony help looking after both the eggs and the young.

In some species, such as the Groove-billed Ani Crotophaga sulcirostris there is a tendency for the dominant female to evict the eggs of other females to ensure that most of the clutch is hers.

Looking somewhat like a pheasant, their affinities are unsure. They were considered to be part of the galliformes for some time, before more modern analyses moved them to the cuculiformes.

Among other unique characteristics, the young have surveyed two claws on the mid joint of their wings.

This makes them look superficially similar to the fossil archeopteryx. Thus this lead early researchers to hypothesise that the Hoatzin was a missing link – but later studies suggested these characteristics are recently evolved and not a relic from the past. 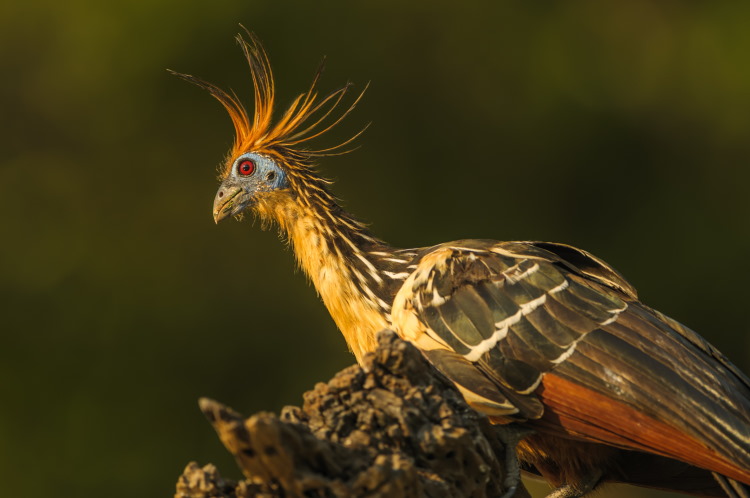 Hoatzin are largish birds, 64 cm (25 in) long, predominantly brown in colour with blue bare skin around the eyes and a prominent crest. They have strong and beaks and feet but are weak fliers – limited to distances of less than 30 m.

They are non-migratory and live in flocks, in the flooded forests of South America. They are herbivores possessed of a large crop, which allows them to store a large amount of vegetable material for later digestion.

There is some doubt as to the nature of the mating system, though obviously groups of 2 are monogamous… at least for that season. 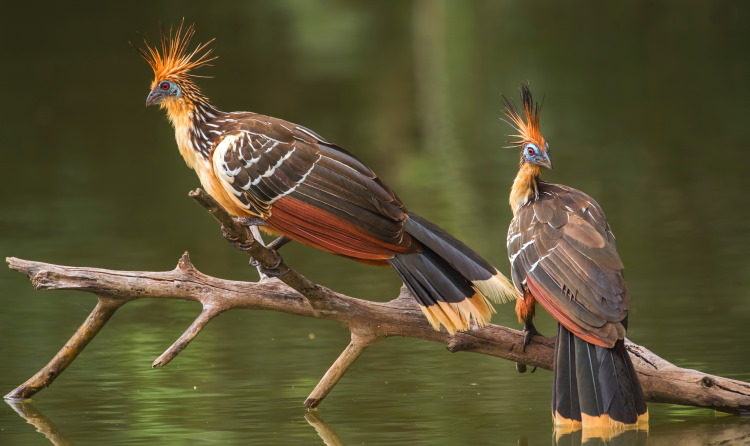 Hoatzins perched on a dead branch in water

The nest is a loose collection of sticks into which the 2-5 buff coloured eggs are laid. Both sexes incubate the eggs and raise the young. Incubation starts with the laying of the 1st egg, meaning the nest his later occupied by young of different ages. Incubation takes 28 days.

Hoatzin young are quite agile from the day they hatch, and have the unusual defence of throwing themselves into the water below their nest and swimming away underwater.

When they surface they clamber back out into the vegetation using the 2 claws they have on the mid joint of their wings as well as their feet.

Once out of the water, they make their way back through the vegetation to the nest. It takes about 2 weeks of young Hoatzin to start feeding themselves.

Flesh of Hoatzins is not considered edible known locally as a ‘Stinking Hannah’ – however the eggs are eaten by local people.

Well, I hope you have learned a little about the world of the cuckoo and the hoatzin!