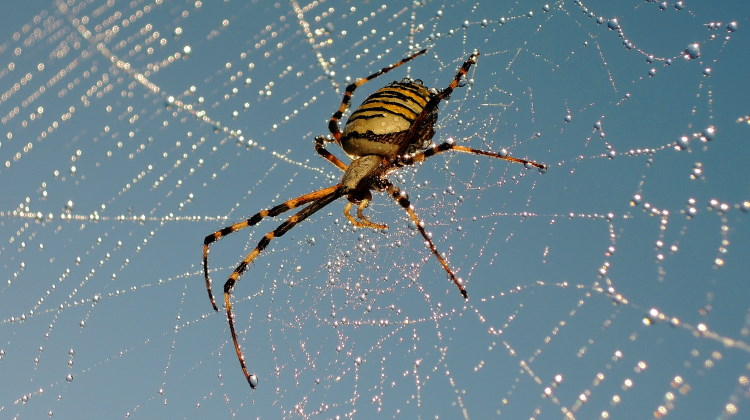 Welcome to the wonderful world of spiders.

Spiders are truly amazing animals. You can find them anywhere, though they do not actually live in the open oceans or the air… however many species are happy to go flying if the weather is right.

This new improved aspect of my website has been written as a result of your continued interest in facts about spiders. I hope you will be able to find information here that will help you truly enjoy the beauty of your local spider fauna more easily.

You love them because you know they are an important part of the ecological balance of this world – without them our lives would be much less pleasant, and much more fly ridden.

They are clever, useful, diverse, fascinating and often beautiful as well.

There are aeronautic spiders, designer spiders, spiders that hunt with a bolas, others that throw a net over their prey. Some spiders use false pheromones to attract moths, aquanaut spiders dive beneath the water and engineer spiders build underground tunnels with well fitted doors.

There are solitary spiders and highly social spiders, there are spider thieves and scavengers and free running hunters. Finally there are even spiders that specialise in hunting other spiders.

Like all arachnids, spiders are recognised because they possess 8 legs. They also have their body divided into only two parts: a prosoma (a combination of head and thorax) sometimes called the cephalothorax; and the opisthosoma, sometimes called an abdomen.

Anyway, without more introduction let’s get on with what you came here for – a wonderful list of fascinating spider facts:

The title of “most venomous spider in the world” is difficult to award because danger is not an easy thing to classify.

The Brazilian Wandering Spider Phoneutria fera is currently believed to have the most potent Neurotoxin of any known spider. It also has very large venom glands, meaning it can bite several times in succession – delivering venom each time.

However the largest number of serious bites may come from a different group of spiders. The genus Latrodectus contains both the Australian Redback Spider and the N. American Black Widow – as well as a number of other species of dangerous spider found around the world.

The Sydney Funnel Web spider Atrax robustus is another species that is commonly reported as biting people with serious medical consequences.

The “largest spider in the world” is the Goliath Birdeater spider from South America (Surinam, Guyana and French Guinea).

Its scientific name is Theraphosa blondi and it can have a legspan of up to 28 cm (11 ins). It is an aggressive spider and – though available in many pet shops – should not be kept as a first spider pet. The largest specimen recorded was a male, though females are generally heavier and tend to have shorter legs.

The “smallest known spider in the world” also comes from South America, a fully adult male Patu digua from Columbia measures about 0.37 mm (0.015 in).

The smallest known female spider is Anapistula caecula from the Ivory Coast in West Africa, it measures 0.46 mm (0.018ins). It is worth mentioning because males are usually smaller than females in most spider species, but the male of this species has not been found yet. Thus it may be the smallest known species when it is finally known.

Spiders often seem to move quickly… and they can.

Tests in England in the 1970s revealed that specimens of Tegenaria atrica could run at 1.9 km/h or 1.18 mph over short distances. While this may not seem fast, if we consider it in light of the spider’s small size (330 times its own length in 10 seconds) it is the equivalent of a 2 metre tall man running 2 km in the same time. This would give him a speed of 720 km/h (480 mph)!

The largest spider webs of all are built by Orb Weavers known as Darwin’s Bark Spider.

Caerostris darwini in Madagascar builds web orbs that may be 2.8 metres wide, with individual anchor lines that span upto 25 metres. These were found to have caught 32 Mayflies at one time!

In a paper published in Proceedings of the Royal Society B on 23 September 2020, Scientists looked into why some tarantulas are blue or green.  Up until recently scientists believed that tarantulas were effectively colour-blind.  So the question of why some of them a brilliant blue or green has been a puzzle.  The new research suggests that the two colours evolved for different reasons.  The green for camouflage, as all the species that sport this colour are arboreal (live in trees).  Vivid blues are not much good for hiding in trees so another explanation must exist.

Using comparative phylogenetic analyses, the team reconstructed the colors of 110 million-year-old tarantula ancestors and found that they were most likely blue.  They also came to the conclusions that some tarantulas may not be as colour-blind as previously thought, meaning they might be able to see the bright blues.  Further more they discovered that blue colour seems to have been lost in some species, and gained in other species that didn’t have it, numerous times over the ages.  Together these two facts suggest that the blue colouration is there to help with mate selection.  Adaptations to do with defense are much more stable, for example the green colouration has never been lost.

What does it mean?  Who knows?  Maybe female tarantulas just like blue males, or perhaps it allows males to stay out of each other’s way.  This research, like so much research, asks more questions than it answers.  But that’s OK, we keep deepening our understanding and amazement

Learn Even More Facts About Spiders

Well, I hope you enjoyed all these facts about spiders. But there’s a lot more to learn. Use the links below to navigate through the spider section of our site: