John Compton in his delightful book “The Spider” uses the below quotation from Gilbert and Sullivan’s musical Operetta Iolanthe, to introduce his chapter on spider courtship. Pointing out quite rightly that these four lines apply as aptly to spiders as to humans:

When the sun shines make your hay.
Where the will is there’s a way.
Beard the lion in its lair.
None but the brave deserve the fair.

As he also points out:

“..the diffident human wooer, if he seeks advice from a friend, is usually reminded that the girl can’t eat him. But this is just what a female spider can do to her wooer, and further more, will do, unless he watches his step carefully.“

The uninformed public delights in the idea that female spiders are all ravening monsters who devour their males on sight. However, despite the examples set by such members of the genus latrodectus such as the North American Black Widow and the Australian Redback (both of whose males commonly voluntarily offer themselves up as a meal to the female after mating) and the undoubted predatory nature of female spiders, many males do live to tell the tale.

In many spiders courtship is a simple affair. Tarantulas as well as members of families such as the Thomisidae and Clubionidae simply say hello – with a brief exchange of information involving an interplay of their front legs. Then if the female is into the idea of mating, meaning she doesn’t attack the male, copulation follows.

Atypus affinis, the purse web spider, needs to do things a little differently because his potential girlfriend lives in her own home. When a male come upon the web tube of a female, he stops an observes for a minute or so. Then he will signal his presence by tapping and vibrating his pedipalps and front legs on her tube. 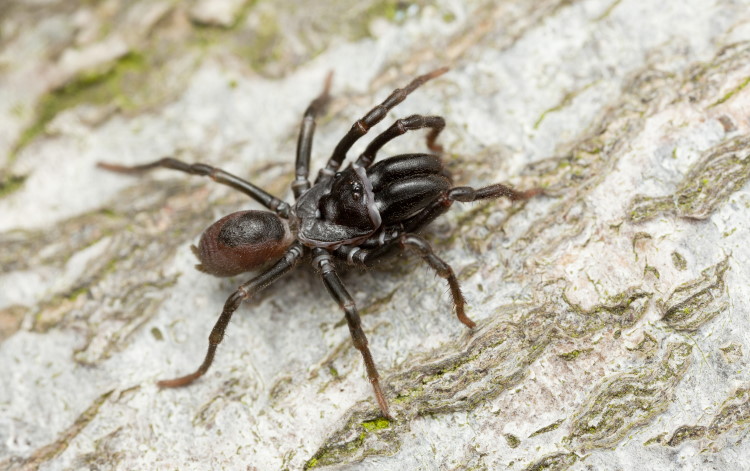 If she is immature, or just plain not interested, she will tug on some strands of the web from inside. He takes the hint and leaves. However, if there is no response he waits a short while and then repeats his message – giving her a second notification of his intentions. If she still doesn’t reject, him he makes an entrance into her tube and all should be well.

Even though the Uloboridae have no poison, the male is still cautious. A male who finds a female in her web attaches a special mating web to it and then dances up and down on it. If she is interested she will swing her body up and down in response before moving towards him down the thread. Although simple, procedures like this are important because they let both sides know what is going on.

Various species of Dictyna live in webs. A male seeks out a female in her web and then sort of moves in. He will walk around on her web, vibrating his legs on the web and giving brief vibratory touches to her with his legs when they meet. In some species he builds a special canopy in a corner of her web.

In any case some time and a number of meetings may occur before she allows him to mate. Often he will stay in the web with her for some time, even weeks… so obviously she is one of the gentler females.

Anyphaena accentuata has to work a little harder. On finding a leaf with a female on it he becomes very excited. First he dances and vibrates for a while, then he goes looking for the female. She inevitably rejects him, where upon he settles down to court her more assiduously. 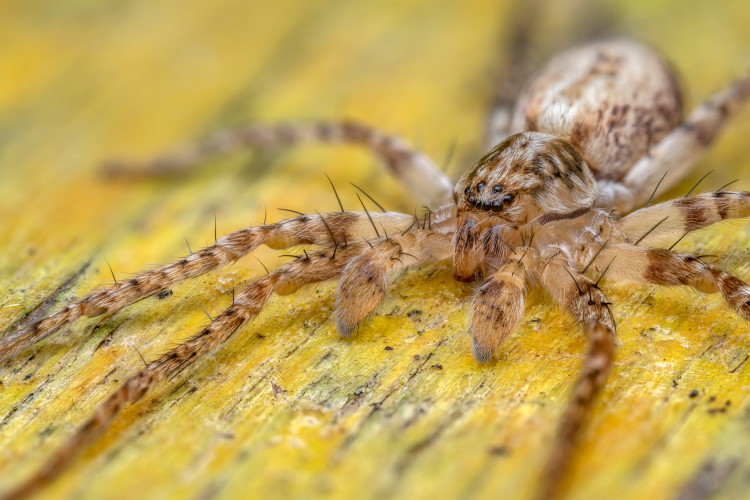 In this, he raises his front legs high in the air and alternates between a jerky dance (with his abdomen tapping on the leaf) and being still with his abdomen, vibrating against the leaf so fast it sounds like a buzzing noise. He may be caused to keep up this pattern for some time before the female accepts him.

Xysticus cristatus mixes bravado with caution. On meeting a female he rushes up and grabs her by the leg. When she stops complaining about this, he proceeds to climb around on her back fondling her with his legs. While doing this, he gently ties her down to the ground with numerous strands of silk.

When he is satisfied she is under control, he climbs off her back and pushes himself underneath her from behind to allow copulation to take place. Having finished his mating, he departs leaving her tied up. It takes her a little while to escape but she doesn’t attempt this until he has left.

Males of the family Salticidae are dance enthusiasts. This is a large family and there is considerable variation within it. They tend to have colourful palps and front legs. Typically the male raises and lowers his front legs, vibrates his palps and runs to and from in front of the female in order to excite her.

The raising and lowering of the front legs is very like semaphore signally in some species. The dancing is often energetic and prolonged, ten or twenty minutes is not unusual.

Pisaura mirabilis is a hunting spider. When mature, he is on the look out for a female which he can detect by smell or by crossing a dragline she has left behind. Once he knows a female is in the vicinity, he goes hunting for a fly; which, once caught, he wraps in a swathe of silk. 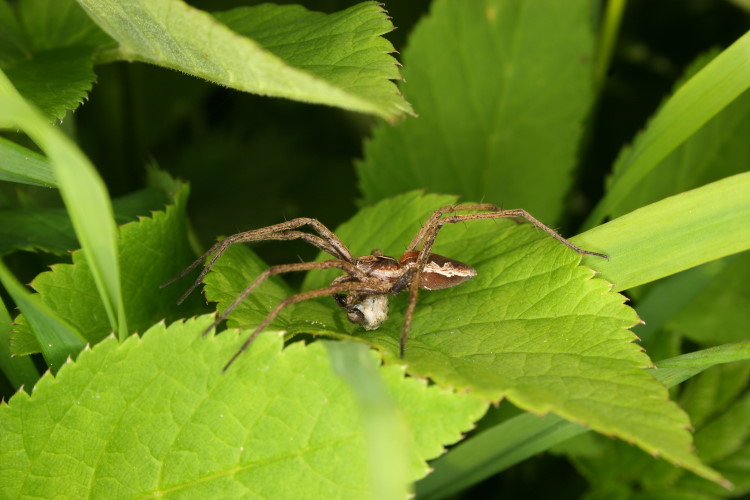 He carries this gift with him, while he searches out the female. Having found her he places himself before, standing high on his legs with his opisthosoma pointing down – so that his spinnerets touch the ground. He then raises his front legs above his head, so that the distal end of his femurs are touching while his tibia and tarsus point out sideways.

He holds this position as the female approaches; then when she has her fangs safely embedded in the fly, he readjusts his posture and mates with her.

While Pisaura and the Salticids work energetically to gain their female’s acceptance, males of the genus Tetragnatha rely on strength and good design to preserve their lives.

Tetragnathid spiders have large chelicerae and the male has two large dull spines on his. When he meets a mature female, he moves straight towards her with his Chelicerae open wide. The female opens her chelicerae wide as well. As they get close enough for their legs to touch they are spread wide allowing them to come face to face without their legs crossing.

As their chelicerae meet, the male locks his around the female’s; the spines on the basal segment and his longer fangs allows him trap her chelicerae completely.

Now that it is impossible for her to bite him, the two descend on a strand of web and mate hanging face to face. After mating he makes a quick release escape dropping rapidly to the ground.

Amongst the strangest looking of spiders are the diminutive Linyphiids. They are so small that most people never see them, but when looked at under a microscope it can be seen that many species have highly deformed upper surfaces to their prosoma. These include odd tubercles, bumps, turrets and grooves. 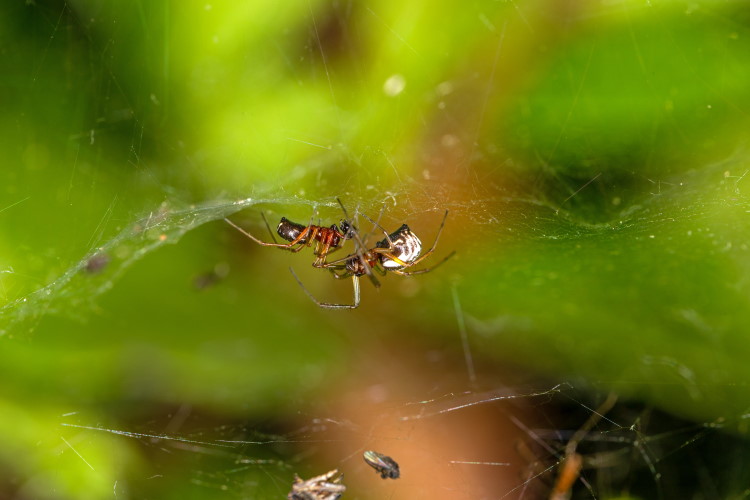 For example Hypomma bituberculatum has two large lobes side by side, both with grooves at their bases. It turns out that these save his life during mating. As he approaches her, she may start to retreat – but soon she lunges at him fangs bared.

He makes no attempt to defend himself and her chelicerae close on his head (around the lobes), with the fangs ending up resting in the groove. She keeps a hold of him like this while he mates with her.

It must be remembered that all of these sets of actions, from strumming the threads of the females web, through tying her down and dancing, to highly divergent head morphology, are ritualised aspects of spider reproduction.

Within a species, there is no room for innovation or novelty. The male acts in a certain way and the female recognises him as a mate because of this. The female needs the mating to occur, as much as the male does… the species would die out if it didn’t work.

Well obviously, with 40,000 species of spider, this brief look at their courtship has done little but wet your appetite and indicate a small part of the diversity involved. I wish you luck and success in your future investigations of spider courtship. Remember, there is nothing in life like direct experience… you need to get out there and see it for yourself.

While you’re here, don’t forget to check out How Strong Is Spider Silk?