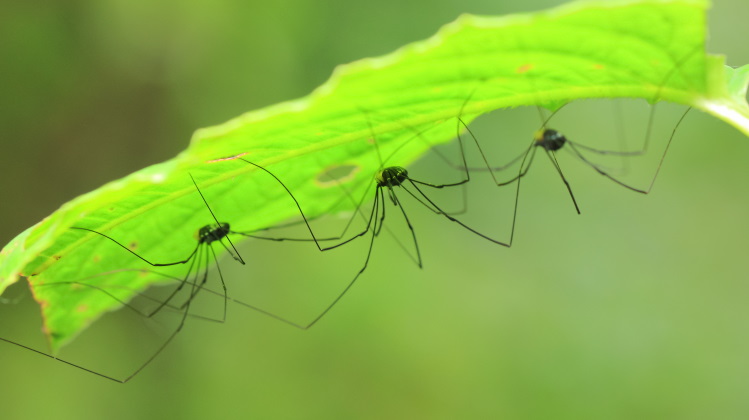 Harvestmen are arachnids of the order Opiliones; this means they are related to spiders, but that they are not spiders. The main differences are that they have only one body section and no poison.

It is worth emphasizing the “no poison” bit here. I receive countless emails from people asking me if it is true that Harvestmen or Daddy Longlegs are the most poisonous spiders in the world.

I do not know how this piece of cultural fantasy came into being… it is however the opposite of the truth. Harvestmen, as I said above, are neither spiders nor poisonous in the least.

Opiliones occur all around the world and it is fun to catch some of your local inhabitants and get to know them.

Recently some large specimens (with bodies greater than 1 cm long) have become popular among invertebrate enthusiasts – and they can sometimes be bought as ‘Giant Harvestmen’ at invertebrate shows and in pet shops.

There are about 5,500 species of Opiliones world wide, making the opilions the fourth largest Arachnid group after the spiders, mites and pseudoscorpions. They can be found on all continents except Antarctica. There are two sub-orders called Laniatores (which are the stout and spiny and found in the Tropics) and Palpatores (which are the slender, delicate and typical of the Temperate climates).

Harvestmen are scavengers of the small and dead and/or predators on those slower and much smaller than themselves.

They live in many habitats, but like damp forested areas the best. They lay their eggs on damp substrates individually; the development time is dependent on temperature and species.

Harvestmen are a good example of the importance of micro-climate in nature. Although they often seem to live in a rather constant habitat; if they are kept in captivity in a controlled environment, they have trouble moulting. Scientists have discovered that small differences in humidity (that occur naturally in the wild… and which we might not even really notice) are crucially important to Harvestmen. Without this variability they are unable to moult successfully.

Well, to conclude this page on nature’s little scavengers – Order Opiliones – here is a short poem you may enjoy:

The harvestman is not a spider,
she has no poison glands inside her.
No fangs, no web, no spinnerets.
She’s sweet and gentle as it gets.
Unless you’re dead, or awful small
she cannot hurt you much at all.
So love her if you chance to see
her in the forest’s wild beauty;
although her legs are thin and long
she’s still a part of Life’s great song