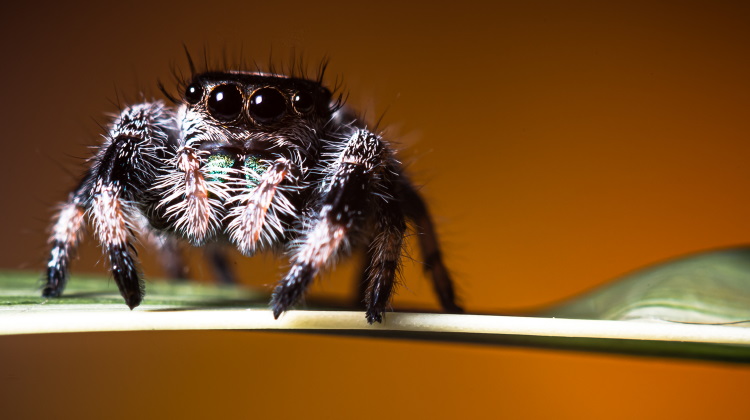 The Class Arachnida are the most familiar of the Arthropods outside of the ever-present Insects.

There are over 80,000 named species and they are united by the possession of eight legs, chelicerae and pedipalps – and a lack of biting and chewing mouthparts

Food is ingested in most cases as a liquid, though some help is often given to the food in becoming liquid; this is by the secretion (or regurgitation of onto the food) of digestive enzymes from the stomach.

The Arachnids evolved in the sea, but now they are almost entirely terrestrial and have developed several important features to help them survive on the land. These include: a waterproof (waxy) exocuticle; internal fertilisation; malphagian tubules as a metabolic excretory system; and internal organs for breathing and gaseous exchange.

The word ‘Arachnida’ comes from the Greek word (really a name) ‘Arachne’.

Arachne was the daughter of Idmon of Colophon in Lydia (ancient Greece), a dyer by trade. Here is one variation of the tale of how spiders came to have their name:

Arachne herself was a weaver… the best in all the known world. However, in a foolish moment she challenged Athene (the daughter of Zeus and the Goddess of – among other things – weaving) to a weaving competition.

Arachne wove such a perfect cloth, that Athene knew she beaten!

But the result of this was that Athene became so enraged with jealousy that she tore Arachne’s cloth to shreds. Arachne herself became extremely depressed after this… and in the end she hung herself.

Athene stirred to remorse at the knowledge of what her anger had wrought. And so turned the rope Arachne had used to hang herself into a web – and Arachne herself into a spider… so that the beauty of her spinning should not be lost to the world ever again.

The class Arachnida is extremely diverse in form and in lifestyles – and little more can be said that includes them all. This diversity is reflected in the classification scheme shown below.

The Class Arachnida is divided into 13 subclasses (or orders depending on which classification scheme you are following) of which the Araneae (spiders) and the Scorpiones (scorpions) are the best known.

Just use the links below to navigate through the arachnid pages of our site.

For more detail, don’t forget to check out the Cladogram taxonomy at the Tree Of Life.