Like all arachnids, the Solifugae (known variously as Sun Spiders, Sun Scorpions, Wind Scorpions, Wind Spiders or even Camel Spiders) have eight legs and their body is in two parts; a ‘prosoma’ equivalent to a thorax and an ‘opisthosoma’ or abdomen. Like scorpions, but unlike spiders, Solifugids have no narrow waste or ‘pedicel’.

Their chelicerae are extremely powerful and are perhaps the most formidable jaws in the terrestrial animal kingdom, in relationship to the size of the animal carrying them.

Sun Spiders are not venomous, but are fast and powerful. Their pedipals do not end in a claw but in a suctorial organ and their first pair of legs are long and thin. They are not used for walking, but are used as a feeler like an insect uses its antennae; they are therefore referred to in some places as being ‘antennaeform’.

Their 4th pair of legs possess 5 (3 in the Hexisopodidae) ‘malleoli’ or ‘racquet organs’. Wind Scorpion bodies and legs are hairy; they are generally 1-5 cms long (though Galeodes arabs often looks to be 12cm or more long when its legs are taken into consideration) and mostly uniform in color, yellow, brown or black, though a few are patterned. 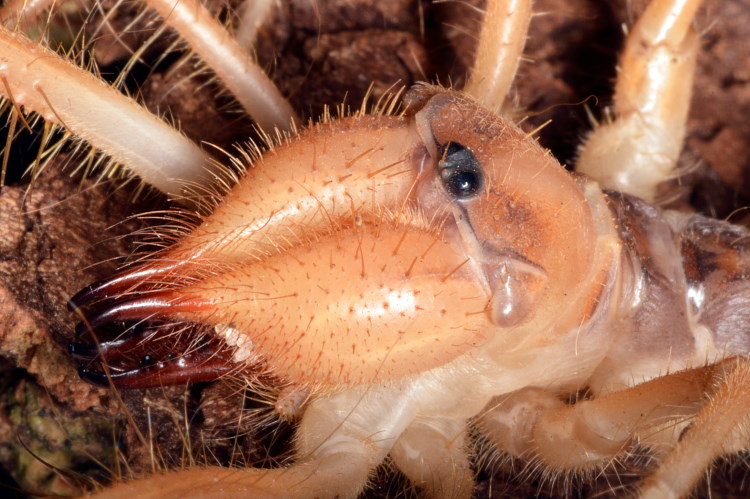 Chelicerae of Galeodes, a genus of solifuges or sun spiders. This genus are found in northern Africa, southeastern Europe and Asia.

The Solifugae are mostly nocturnal animals. They live in burrows that they dig mostly with their 2nd pair of legs, which are the 1st pair of walking legs remember. Some species use one burrow for several weeks, or even months in the breeding season (i.e. Galeodes arenoides); while others make a new burrow each night (i.e. Eremobates formicaria).

All the Solifugae are predators; most species will eat anything and for the larger species this includes mice and even lizards. J. L. Cloudsley-Thompson records how during World War II, his troop corporal kept one in a tin on the top of their tank and fed it almost entirely on scorpions.

However, some species are more specialised. Solpuga sericea and Solpuga lineata burrow into the soil in order to feed on termites; while a Californian species of the genera Eremobates enters bees hives and feeds on the bees; and Eremobates pallipes from Colarado is suspected of hunting ‘bedbugs’. 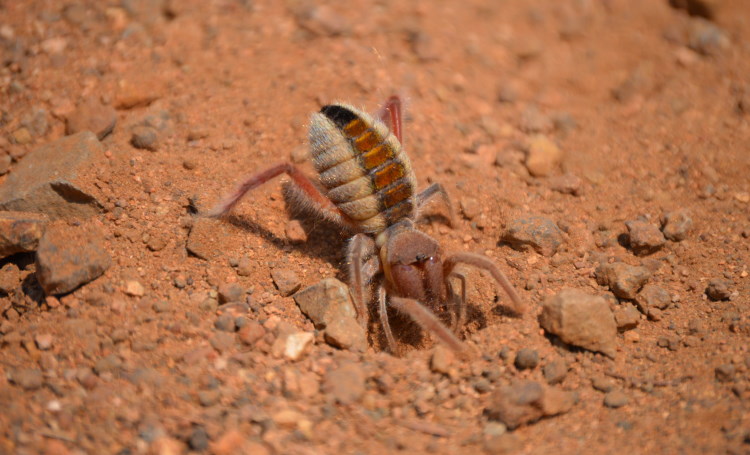 Though sight is an important means of detecting prey for some species of Galeodes, it is obviously not that important for the majority of nocturnal species – or for those species which are blind. They use their large chelicerae not only to crush their prey, but also to scoop water into their mouths when they are drinking.

Males Sun Spiders are smaller and lighter than females, but have longer legs. The highly carnivorous females have no qualms about eating the male after mating, if he is too slow in making his escape.

Because of this aggressiveness of the females, the males first act in preparing to mate is to lull the female into a state of lethargy by stroking her.

Once she is suitably docile, he picks her up in his chelicerae and carries her for a while. Next he lays her on her side and awakens her sexually by stroking the underside of her abdomen.

In most species of Wind Scorpion, sperm transfer involves the male depositing a spermatophore on the ground and then charging his pedipalps with sperm and using them to inseminate her. However, in the Eremobatidae sperm transfer occurs directly from the male’s genitalia to the female’s.

Up to about 200 eggs are produced in the larger species, less in the smaller ones. The eggs take varying amounts of time to hatch, from 1-2 days in Galeodes sp. to 21-28 days in Eremobates durangonus. The first instar larvae (sometimes called the the first ‘stadium’) is a non-moving embryo like creature; it later moults into a more active animal which looks like a small Solifugae.

In some species of Galeodes, the female is known to stay and guard the eggs and the non-moving larval stage.

The Solifugae are divided into 10 families.