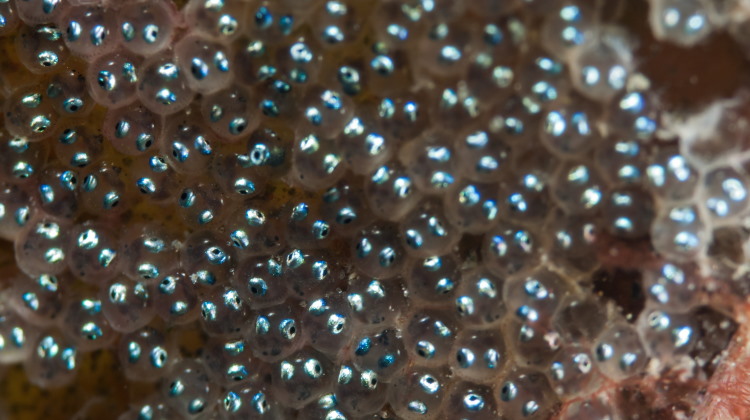 They start their lives as a single fertilized cell and – with the initial division of this cell to make two – they continue to add cells until they die.

Unlike mammals, fish grow throughout their whole lives. Albeit their growth rate slows considerably once they reach maturity and decreases from therein.

The life cycle of a fish contains 6 stages as generally recognized by science. These are: 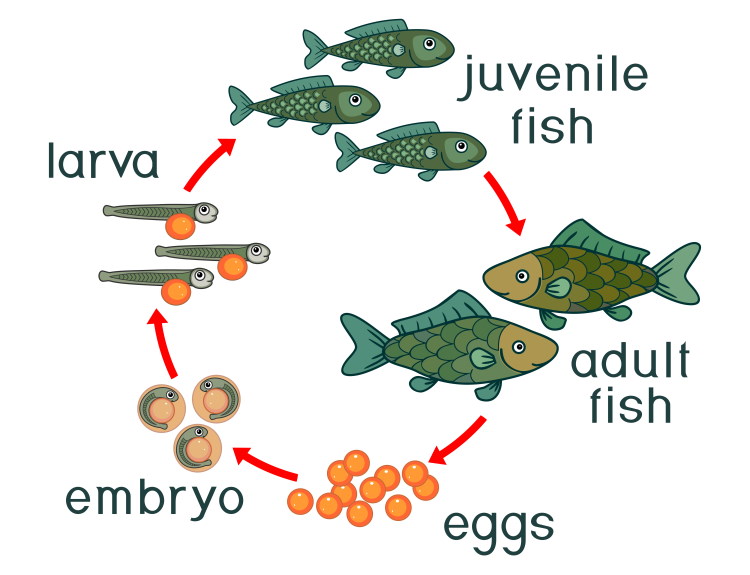 The Egg is defined as the n=1 stage (n being the chromosome count).

A fish egg, as with all eggs, contains only a single copy of each gene and chromosome – the mother’s genetic heritage. The fertilizing sperm also contains a single copy of genetic material – the father’s contribution.

The act of fertilization combines these two genetic contributions to make an Embryo, which is the first step in the n=2 life cycle of the fish.

n=2 is the normal chromosome count for all multicellular animals. You and I both have an n=2 count, meaning we have two copies of each gene and chromosome – one from each of our parents.

While the Embryo is the beginning of the fish’s life as an individual, it is also defined as the stage during which the organism is unable to feed itself.

All an embryo’s food comes from its mother. Either indirectly, through the egg, or directly through the mother’s blood system. The embryo phase ends when the young fish first starts acquiring its own food.

The embryo’s life starts within the egg-shell and continues until sometime after the egg has hatched. The period of time between hatching and first eating is called the ‘free-embryo’ stage.

Fish larvae may look very unlike their parents, as they often have specific morphological adaptations to allow them to survive during this vulnerable time of their lives.

The Larval phase of a fish’s life cycle may be long or short and it may be benthic or pelagic.

Carp have a short larval phase of just a day or two. Sardines have a longer larval phase of 1 to 2 weeks and Eels have a very long larval phase lasting several months. For many of the species that go in for large numbers of eggs, the larval phase is pelagic – becoming part of the zooplankton that so many adult marine organisms depend on for food.

For these species, these first three life stages are the ones that experience the heaviest degree of predation.

The Juvenile period starts when the young fish looks like a small adult. Though the colouration is often different and it has all its normal fins and all (or nearly all) of its normal internal organs.

This is the period of most rapid growth, the young fish literally lives to eat and grow. The Juvenile period ends when the organism’s gonads (reproductive organs) mature and it is capable of reproductive activity.

The Juvenile period of a fish’s life cycle may last for several years and the change from Juvenile to Adult may be simple – or it may involve a complex metamorphosis, as in Eels.

The Adult period of the fish life cycle begins with the first maturing of the gonads. In other words, when the fish is reproductively functional. It ends when the gonads cease functioning and the fish can no longer reproduce.

Generally speaking, assuming the fish dies of old age (which very few do), the adult period is the greater part of the fish’s life and may last for many years.

Senescence begins when the fish’s gonads stop producing gametes, this is basically the period of old age.

The fish is still growing, but its growth rate is slowest in this period. For some species, such as Salmon, it last only a few hours, or days at the most. But for others it can last longer and Sturgeon can have a senescent period that lasts for several years.

Some aspects of the production of eggs by fish have been covered in the page on fish reproduction. However the story does not finish with the laying of the eggs.

When considering the reproductive success or failure of an individual fish, we need to try and work out how many of the eggs it lays survive to become young – and then go on to be adults that themselves succeed in reproducing.

This is called measuring the animal’s life-time reproductive success.

The number of successful offspring a female fish produces is the number of eggs it produces that succeed in getting fertilized and survive to reproduce.

For a male, it is the number of eggs his sperm fertilize that survive to reproduce.

In assessing this, we need to know not only how many eggs a female produces in a given reproductive season, but how many reproductive seasons she lives through. For males we would have to know the corresponding data on eggs fertilised. We have no way of measuring success in males at the moment.

For a female Mackerel (Scomber scombrus), for example, we know that on average she can produce about 500,000 eggs a year. We also know she can participate in 4 successive reproductive seasons. This means that she will produce about 4,000,000 eggs in her life.

What happens to all those eggs?

The truth is that most – if not all – the eggs any individual female fish produces will die… eaten by a wide range of animals, or destroyed as eggs by bacterial and fungal diseases.

The Atlantic Mackerel spawns in huge numbers from Newfoundland to Chesapeake Bay. In 1932 a scientific study of the reproductive success of these animals showed that in that in 1 year 1,000,000,000 adult Mackerel produced about 64,000,000,000,000 eggs.

This massive overproduction and subsequent mortality seems wasteful. A nightmare of foolish proportions to our small human minds, bred and trained to more frugal attitudes.

However, it is all essential to the current balance and diversity of life on Earth. We are all linked together and dependent on the functionality of these cycles of birth, overproduction and death.

The precarious balance of any given moment in time has evolved slowly, taking millions of years. Fish cannot change their reproductive rates drastically over just a few generations.

As we put more and more pressure on the system, by the uncontrolled use of the technological advantages that we have developed in just a few short years, the balance becomes distorted. The system degenerates and even the massive reproductive rates discussed above are unable to compensate the oceans for our mechanically induced mortality rates.

It is a fact that the present systems of the human fishing industry are unsustainable. In any system, greed inevitably leads to poverty. Catching fish to feed cattle is a perfect example of human stupidity and greed… that is even now impoverishing our oceans.

Well, I hope this has been an interesting introduction to the fish life cycle.

Perhaps now you’d like to learn more about electric fish.