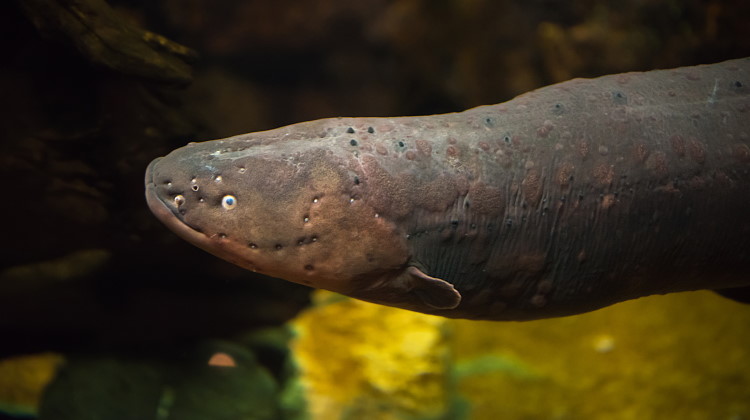 Nerve impulses are electric impulses. And water – especially if it contains dissolved minerals, called electrolytes – is a good electrical conductor.

This means that every time an animal that lives in the water uses a muscle it gives off a minute electrical signal. It should come as no surprise then, to learn that many species of fish have learned to detect these signals.

An electric fish can, with electrical sensing, detect and locate prey (see predatory fish) that is hidden from sight and against the direction of the flow of the water. Perhaps buried in the mud or sand even, if their prey item is not moving.

Rays in particular use electrical sensing to detect buried prey. Electrically sensitive fish can also detect the approach of both conspecifics and predators.

In most electrically sensitive fish species, the sensors (called external pit organs in teleosts and ampullae of lorenzini in elasmobranchs) are located on the animal’s head.

However they may also be scattered over the body, or along the lateral line. The sensors consist of canals of electrically conductive gel, that open to the water at certain points called pits.

It is known that fish can detect the weak electrical field generated by their own movement through the Earth’s magnetic field. An ability which would obviously be useful for migratory fish species.

Species which can sense electrical impulses of other animals, but not generate their own special fields, include Sharks, Rays, Skates, Catfish and Paddlefish.

This has happened in 2 families of Rays and in 10 families of Teleost fish. Although the most famous electrical fish are the Electric Catfish of Africa (Gymnarchus niloticus) and Electric Eels of South America (Electrophorus electricus) many other interesting, albeit less powerful, species exist.

These fish have electricity generating cells that constantly give off an electrical pulse, that in turn creates an electrical field around them. Everything that touches this field changes the feedback image the fish receives from its field.

Thus, the fish can build up an image of its world that is not dependent on sight, sound, smell or touch.

Such an ability is very useful if you live in muddy water, as most electrical teleosts do. Also most electric fish are nocturnal. Furthermore, these fish can control and change their own electrical field to improve their image of the world – or to change another electrically sensitive fish’s perception of them.

Apart from generating an electrical field for the purposes of perception, many electric fish can release an electrical discharge into the water around them. By doing so, they can both deter predators and stun their own prey.

As all muscular movement (see fish muscles) generates electrical impulses, movement can distort a fish’s electrical image of the world. For this reason, most electric fish (fish that generate a special electric field for perceptive purposes) tend to move slowly and to hold their body straight – using only their elongated dorsal fin to swim with.

Most fish, especially the electrically stronger species, produce their electrical field as a result of timed pulses of electrical discharge. But a few of the weakly electrical fish use a continual wave to produce their field. Most species, even the most powerful, normally only produce relatively weak discharges to maintain their field – saving the power bursts for special occasions.

The cells producing the electricity are called electrocytes. Each electrocyte produces only a very little electricity. To produce a large voltage, a fish must have many such cells arranged in batteries that are able to discharge simultaneously.

These electrocytes are normally located in the head in marine species and in the tail in fresh water species.

When two fish of the same species meet, who are using similar frequencies, they change their frequencies to make them less similar – in order to avoid having their perception jammed by the other fish’s output.

Not all fish can produce electrical discharges of equal potential difference. It is ecologically expensive to carry around so much generating equipment.

The champion is without doubt the Electric Eel (Electrophorus electricus), which can generate a potential difference of up to 600 volts. The Electric Catfish (Gymnarchus niloticus) can generate about 300-350 volts, a Torpedo Ray about 220 volts and some Stargazers can produce 50 volts. However, most electric fish are limited to between 8 and 40 volts.

The two largest electric fish, The Electric Eel of South America and the Electric Catfish of Africa prey specifically on the smaller and weaker species of electric fish. They can turn off their own electrical field to help keep their presence unknown to their prey. Then, when a smaller species comes close, they suddenly release a large killing discharge.

The smaller, weakly electric fish have been observed trying to hide from such predators, by also turning their electrical field off – or by turning it off and on in an irregular way.

The voltage of an electrical discharge rapidly diminishes as it travels away from its source. Electrolocation is ultimately a close range sense, with a working sphere for most species of between 1 and 2 metres.

Finally, as I said earlier, anything within a fish’s electrical field with a different conductivity will distort the the electrical flow pattern set up by the fish and thus change the field potential around the fish. Detecting these continual changes allows the fish to map the physical world around it.

Of course a fish’s ability to make sense of this flow of information is dependent on its brain size and complexity (see fish brain).

Mormyrids are well known for their large brain to body weight ratios, which are far higher than in any other fish – equal to a human being’s in fact.

Does this equate with higher intelligence? The answer seems to be yes. Aquarists (people who keep fish) have known for a long time that the Nile River basin Mormyrids, which use more complicated signals than the Amazon River basin Gymnotids, are playful.

They are well known for making toys out of objects in their aquaria and carrying them around with their noses. Also scientists have long considered the Mormyrids to be the easiest of fish to teach tricks in the laboratory. Both playfulness and learning are signs of intelligence (see fish intelligence)