The Phasmida (Walking Sticks or Stick Insects) as their name implies, are a medium sized order of insects most of which look like sticks or leaves.

There are around 2,700 known species, most of which come from the tropics. Though there are three New Zealand species currently living in England and about 20 European species.

They are popular in many parts of the world as pets (see keeping pet stick insects) and there is a society of people, The Phasmid Study Group dedicated to the studying and keeping of them. 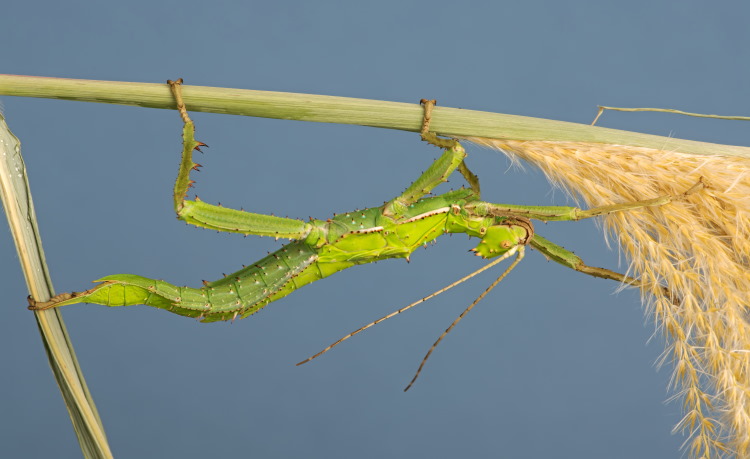 Many species are capable of parthenogenic reproduction (i.e. the ova develop without fertilisation into females only, which can mature and repeat this process), most notably ‘Carausius morosus‘ the ‘Common, Indian or Laboratory Stick-Insect’.

Phasmida are hemimetabolous and generally elongate, though some forms (Leaf-Insects) are broad and flattened. Some forms are apterous (winged), though often only the male flies. They have biting and chewing mouthparts and are all phytophagous (leaf eating).

They all posses compound eyes and some of the winged forms possess 2 ocelli. Their antennae are generally filiform ranging from 8 to over 100 segments and their cerci are short. They are often adorned with numerous spines and other protuberances.

Stick Bug eggs come in 2 main forms, depending on whether they are dropped on the ground or placed in some less accessible spot. Those that are just dropped to the ground have a relatively large ‘capitulum’, which generally contains lipids and other substances attractive to ants. The ants take the eggs back to their nests, cut off the capitulum (sometimes called an elaiosome) and feed it to their brood; the rest of the egg is then thrown into a garbage dump.

The Stick Insect eggs gain protection from birds and many other predators by being in the ant nest – and hatch quite happily inside the nest or buried in the garbage.

In some species of Stick Insect the newly hatched nymphs are ‘ant mimics’ i.e. Extatosoma tiaratum. This whole process is a remarkable example of plant mimicry on behalf of the Stick Insects, as many plants in similar habitats attach food bodies called ‘eliasomes’ to their seeds in order that ants should take them back to their nests. 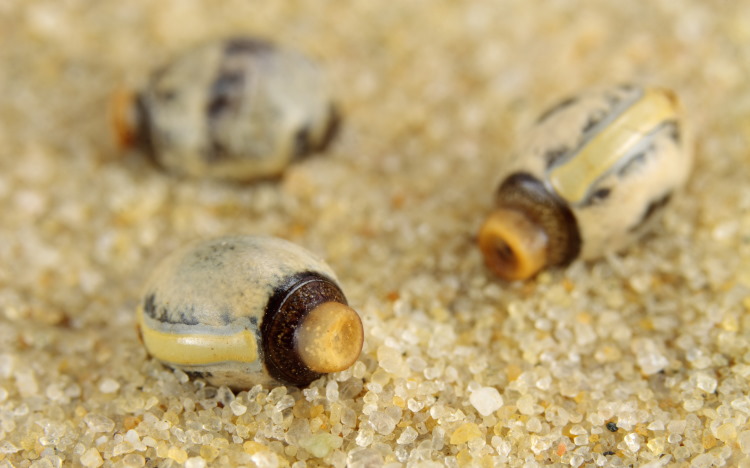 Eggs of the Australian stick insect Extatosoma tiaratum on sand

It is known that seeds that germinate inside ant’s nests tend to grow stronger and produce more seeds themselves than seeds of the same plant that germinate away from ants nests.

Other species of Stick Insect lay their eggs in the soil (Aretaon asperrimus), into hollow parts of plants (Graeffea crouanii), or glue them to parts of the plant such as leaves or the bark (Timema californica) and these tend to lack the capitulam or have it greatly reduced.

The eggs take anywhere from 3 months to over 18 months to hatch into miniature versions of the adult, except that they have no wings. They are generally active and run around a lot; they climb to the top of, or to the end of, a limb of the nearest vegetation.

Most Stick Insects have 5 larval instars in the male and 6 in the female – and take from about 3 months to over 12 months to reach maturity. The females are generally far larger than the males, except in those species where the males actively compete for females as in Eurycantha calcarata where the males are nearly as big as the females -and Oncotophasma martini where they are slightly bigger. 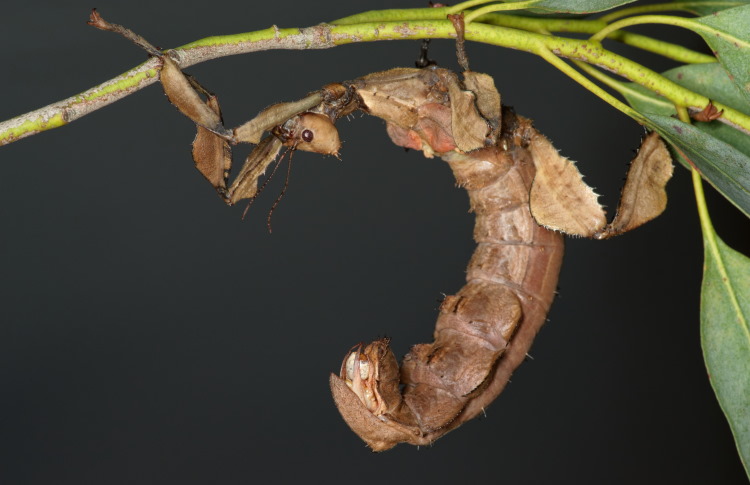 This is because the females produce the eggs, which are relatively large, and she needs a larger abdomen to make them in (and a larger mouth to eat more food) and thus the rest of her body has to be larger too. The males in many species fly and have longer antennae to help them find the females.

In a number of species of Stick Insects, the males guard the females after and some times before mating with them. This is particularly evident in species such as, the American Walking Stick Anisomorpha bupestroides, Anisomorpha monstrosa and The Small Spiney Stick Insect Aretaon asperrimus. Male Small Spiney Sticks will, in captivity at least, guard anything that looks remotely like a female of their species, such as a juvenile female of a different and larger species with which they can not possibly have mated.

The life span of many species is about 1 year, however in many of the larger and slower growing species this may rise to more than two years after hatching.

Though most Stick Bugs rely on passive camouflage in order to avoid predators, some of the larger species such as Eurycantha horrida have large spines on their hind legs which can serve as aggressive tools of self defence against predators – as well as in competition with other males.

Remember, the order Phasmatodea are also known as Phasmida or Phasmatoptera

Well, I hope this has been an interesting little look at the order phasmida.

Perhaps now you’d be interested to learn a little about the hover flies.