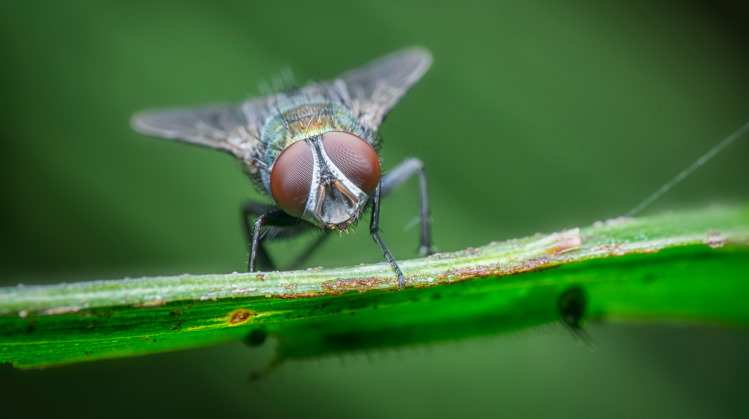 Cyclorrhapha are the most evolutionarily advanced flies, with mostly maggot like larva. They are generally short and stocky and covered in short hairs.

Coffin flies are remarkably ugly little flies (between 0.5mm and 6mm long) renowned for the fact that some species of them i.e. Conicera tibialis, can live for a year or more and produce numerous generations inside fully interred human coffins that they feed on the dead bodies within.

Harold Oldroyd mentions a reliable report in his book “The Ecology of Flies” of a European in Burma passing larva, pupa and adults of an unidentified Phorid (Coffin fly), suggesting that he had a colony living in his alimentary canal.

Within the family Phoridae is the tribe Termitoxeniinae, which live in Termite nests and are amazing in how short their larval life is. The first stage instars moult immediately after hatching; the second stage does not eat and moults shortly after this; and the third stage has been completely suppressed, thus the whole larval life lasts less than one hour and in some species only a few minutes.

Hover flies are some of the most attractive and noticeable flies around. They are also – as their name implies – incredibly good at flying and hovering.

In fact so many Hover fly larvae eat aphids that, like the lady beetles, they are well known as a gardener’s friend. Not only are Hover Fly useful because they eat aphids, but they are also the second most important group of insect pollinators – after the Bees and Wasps.

Soldier Flies are another group of beautiful and useful flies.  There are about 2,700 species in over 380 genera known to the world today. They display considerable diversity in both size ranging from 3 mm to 20 mm in length and colour.  Alhough many species commonly are partly or wholly metallic green, others are wasp and bee mimics like the hover flies being well  marked with distinctive shades of black and yellow. The adult flies eat only nectar.

The larvae can be aquatic or terrestrial in habitat and predatory, mycophagous or saprophagous in feeding style.  Saprophagus species are raised as animal food because they feed on rotting vegetation and are easy to husband.  A soldier fly larval form featured in the news in Cambodia in February 2021 as a result of residents of the nearby village complaining to their local council about the smell coming from the farm.

There are a large number of flies which are commonly associated with dung. In the north temperate areas (that’s us in England as well as most of Europe and a fair portion of North America) this means mostly cow, horse, pig and sheep dung.

The Sepsidae and Borboridae feed on the dung as both larvae and adults and various species from both families will make up most of the small black flies which fly up if you disturb a fresh cow pat.

The Scatophagidae are the Dung flies (i.e. the yellow and grey hairy flies you can find all over grassy fields). The Common Yellow Dung Fly Scathophaga stercoraria is a typical example of this family. Though their larva feed on the dung, the adults are predatory and feed on other flies which have come to the dung to feed.

These are the small flies with light red eyes that you find in the kitchen in Summer whenever some fruit has become over ripe. Once you get some in your house, they tend to fall into your drinks – especially beer, wines, cordials and fruit juices.

The genus Drosophila contains more than 1,000 species some of which have a two week life cycle and are commonly found in Universities and Colleges around the world (where they are used for experiments in the study of genetics; and in Pet Shops where they are sold as food for baby Spiders and Praying Mantis).

The Muscidae are a large family of flies typified by three species. The Common House-fly Musca domestica, which has two large orange spots on its abdomen; and whose larva live in rotting vegetable matter and dung.

The Lesser House-fly Fannia canicularis, which has four small orange spots on its abdomen and tends to fly around and around in circles in your living room.

And the Stable-fly or Biting House-fly Stomoxys calcitrans. It is worth noting that a pair of entomologists called Yao and Yuan after studying 378,046 House-flies estimated that in a residential area each House-fly carries 1,941,000 bacteria – so don’t let them get at your food.

The Muscidae also includes some of the Green Bottles, though others are part of the Calliphoridae and it can be difficult for an amateur to tell these otherwise quite attractive flies apart.

The larva of these flies all live in, or feed on, carrion (recently dead animals) but only when it contains a high degree of moisture. Blow Flies got their name from the fact that meat that they had laid their eggs into was called ‘blown’ – as in blown up. Blow flies, like the Blue Bottle Calliphora vomitoria, are highly attracted to thawed out or cooked meats and can be quite a nuisance in warmer counties than the UK.

The Green Bottles Lucilia sp., are apparently attracted to a different set of odours than the Blow- flies and this is why they are often common outside, but seldom come indoors. The largest members of this group are the marbled-grey Flesh-flies, like Sarcophaga carnaria.

These are again often common outside, but seldom come into a house. Though they too breed in carrion, they give birth to live young larva rather than laying eggs.

Aside from feeding on carrion, there are a number of flies which have taken to feeding on living flesh. Some of these are related to the common Green Bottle i.e. Lucilia sericata and Lucilia cuprina, which lay their eggs in the damp ammoniated wool around the sheep’s anus.

The larva, which start off eating the sheep’s faeces, soon take to eating the sheep’s flesh instead. These two flies are a serious pest of sheep from Scotland to Australia. These, and others like them, attack a wide variety of animals – particularly in the tropics, and are known as Bots or Bot-Flies.

In tropical countries most animals are attacked by some sort of warble fly, even elephants and rhinos have their hides pitted with the pock marks left behind by the larva – as they burrow out of the skin before falling to the ground to pupate. Adult Warble flies are large and hairy and often look like Bumblebees.

The Hippoboscidae are all parasites of mammals and birds. The adults all feed on fresh blood and after their initial dispersal, seldom leave their host or its nest/lair – though most of them are winged and can fly quite well.

The larva live their entire life inside the adult female, who ‘lays’ pupa (which in some bird parasites, lies in the nest over winter – hatching in time to crawl onto the returning adults as they reoccupy the nest). The adults are nearly all flattened, ugly looking things with strong clasping legs and a crab-like gait, i.e. the European Forest Fly Hippobosca equina.

The Streblidae are much the same as the Hippoboscidae, except that they only live on bats; and then only where the winter temperature remains above 10C. Most of them stick their mature larva onto the walls of the caves they share with their hosts, where they pupate rather than dropping them to the ground.

The Nycteribiidae are the world’s ugliest flies and look more like spiders. Like the Streblidae, they are confined to bats as hosts and they stick their larva to the surrounds. However, they are completely wingless and are totally dependent on their hosts for transport as well as for food.

Well, I hope this has been an interesting overview of the world of the Cyclorrhapha.

Perhaps now you’d like to learn a little about the robber flies.